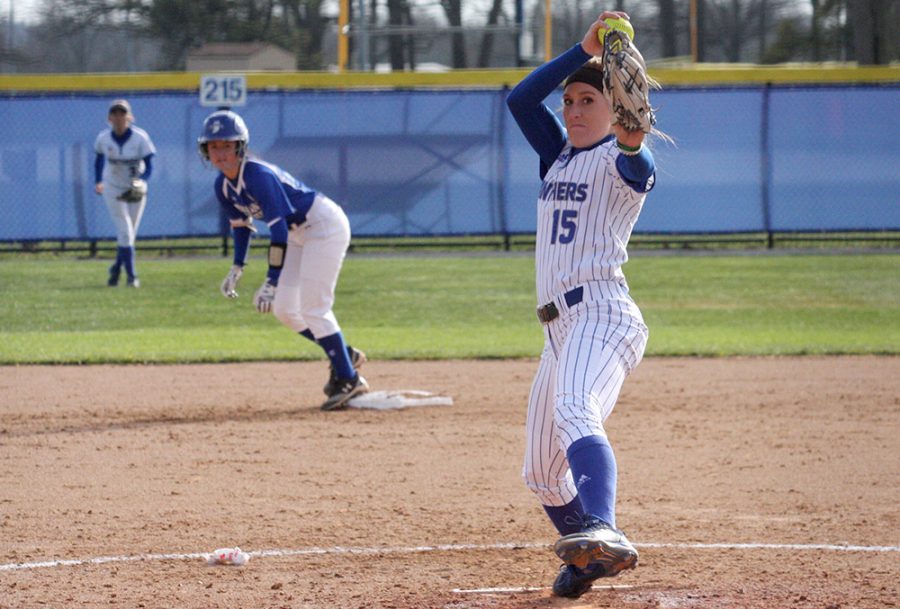 Eastern senior Jessica Wireman throws a pitch in the Panthers' 2-0 win over Indiana State Thursday at Williams Field. Wireman threw a complete game shutout to pick up her 12th win of the season and worked her way out of a bases-loaded jam in the sixth inning.

Eastern senior pitcher Jessica Wireman threw five innings of no-hit softball and for a while it looked like she was going to cruise unscathed in the Panthers’ 2-0 win over Indiana State on Thursday at Williams Field.

However, in the sixth inning of the game, Wireman ran into some trouble and knew she had to step up and pitch through the adversity.

Indiana State reached base twice in that inning on two weak infield hits that were legged out by the batters, had a player reach on a fielder’s choice and had a third runner reach when Wireman hit a batter. Wireman struck out two of the last three batters in that inning, to work out of a bases-loaded jam with no damage done to the scoreboard.

“I was pretty mad. I’m like ‘they don’t really deserve to be on base right now so I am just going to shut them down and I did that with the strikeout at the end,’” Wireman said about the sixth inning.

Working out of a situation like that is something Wireman says does not bother her at this point in her career.

“It doesn’t really get to me because I think like ‘they’re not good enough to be in this situation, its only because I’ve accidentally put them there. So I am going to show them who is boss, who is really the boss.’”

Wireman finished the game with eight strikeouts and gave up just three hits.

She said she focused on her fingers today, spinning the ball and throwing hard in the win.

The Panthers’ offense did not get much better treatment from Indiana State’s starting pitcher Kylie Stober, who finished the game with just one earned run, surrendering five hits.

But with Wireman solid on the mound, the offense did not need to do too much to win and capitalized in the right moments to pull off the win.

Freshman Morgan LaMore was involved in both of the runs the Panthers needed to win. In the second inning she hit an RBI double, scoring Megan Burton who reached on a single.

LaMore doubled again in the fifth inning and was brought around to score by an RBI single off the bat of junior Kayla Bear.

Coach Kim Schuette put things simply after the game, saying the team did enough to win with “nothing flashy.”

“Whether we get 25 hits or four when we need them, Morgan LaMore came through and our baserunning with Megan (Burton) to take that extra base, round first base hard and then the ball kind of dribbled away and she took second, that’s pretty important,” Schuette said. “I like that good clean softball and that’s what we did today.”

The win improved Eastern’s record to 25-8 on the season and was its first home game after four cancellations.

“Anytime we can play at home is exciting,” Schuette said. “Our kids have been anxiously waiting for this.”

All four of Eastern’s games were postponed this weekend.