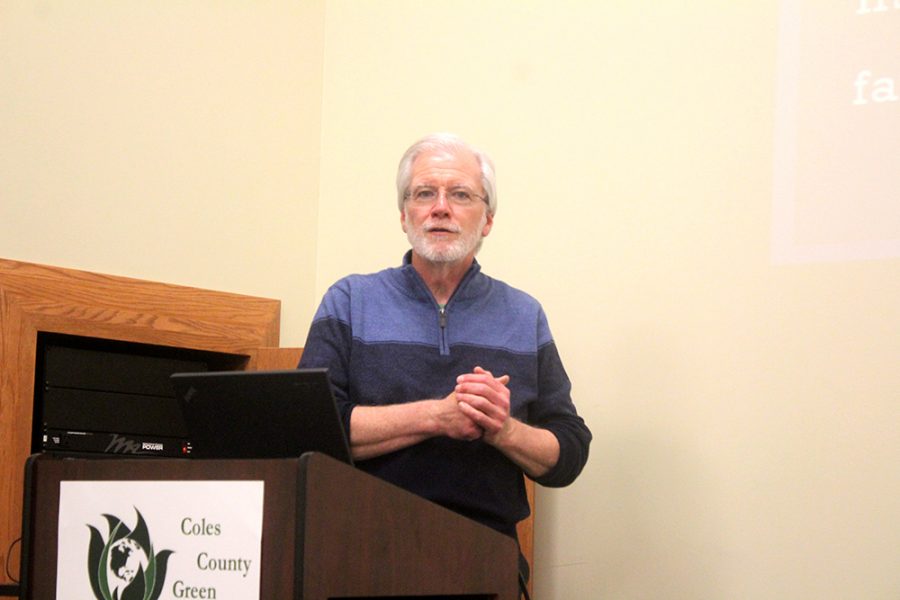 Rich Whitney, the co-chair of the Illinois Green Party discussed how free public education could be obtained and how it would positively impact society at the Charleston Carnegie Public Library on Wednesday evening.

Whitney said free higher education would help the United States move toward becoming an egalitarian society and would help reduce differences between people of different skin colors and ethnicities.

“When you have a better educated society, people are able to rise out of the circumstances they’re born into,” Whitney said. “Free education isn’t a perfect solution but it will benefit people economically.”

Whitney said some argue someone else would have to pay for students’ free education.

However, this would not necessarily mean an increase in taxes, he said.

Currently, Americans hold $1.31 trillion of student loan debt, according to a report by The Federal Reserve Bank of New York,and about 70 percent of college seniors hold at least some debt.

Whitney said the United States is falling behind when compared to other countries in public education.

The U.S ranks fourteenth in the world in terms of 25 or 30 year olds with some form of higher education, Whitney said.

States such as California provided tuition-free education into the ‘60s, but tuition has skyrocketed since Reagan’s administration imposed reinstating tuition costs, with the University of California’s tuition going from $647 in 1947 to $ 10 thousand dollars in 2010 for state residents.

Whitney said the regular military budget is $ 700 million dollars a year and free public education would cost approximately $ 100 million, so cutting the federal budget by one-seventh would be one tactic to achieve free higher education.

Emma Pikula, a junior history major, said she thinks obtaining funds for higher education through tactics such as the La Salle tax is interesting.

“I think that people need to pay their fair share to fund higher education and that we need to avert funds from where we spend too much money,” she said.

Additionally, Whitney said instead of the government borrowing money from the federal reserve system, it could issue the money directly into the economy.

“Higher education is supposed to improve social mobility, but if we stay on the track we’re to become a kind of gilded aged society where only the very wealthy can afford it,” Whitney said.

He added that when considering how to fix the state of Illinois, a lot of different ideas need to be put onto the table.

“I believe that tactics need to be a little more incremental, but I support free education in the long run,” Nevarez said.