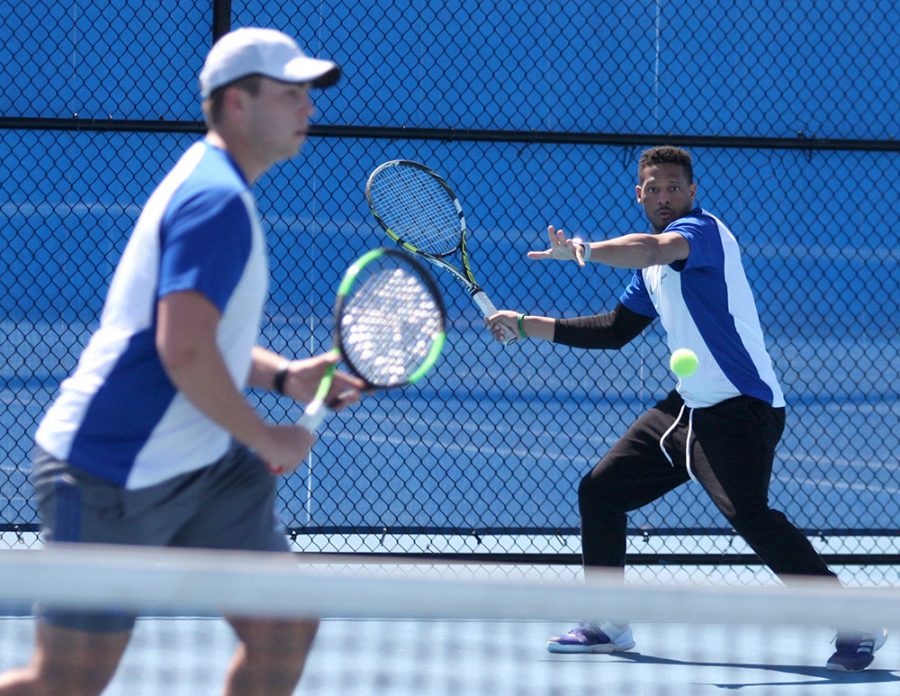 Senior Jared Woodson returns a ball on his forehand during doubles. Woodson and his partner, sophomore Gage Kingsmith (left) have found success this season as a doubles team.

The duo of sophomore Gage Kingsmith and senior Jared Woodson have been one of the forces for the Eastern men’s tennis team in doubles play competition this season.

With Kingsmith and Woodson earning its fifth win this spring in doubles play against Tennessee State, they are 3-1 in in conference play, and 7-8 overall.

This tandem is also second on the team in doubles wins, only trailing sophomore Freddie O’Brien and senior Grant Reiman, who are 10-11 and have won their last two matches.

The Panthers have two matches left on the spring schedule with one of those being against OVC opponent Austin Peay.

Woodson and Kingsmith played in doubles competition last season, but the two were not teamed together.

Even though both players lost, teaming these two up this time around could give them a chance to win and earn the point.

All spring the doubles point for Eastern has been crucial when jumping out ahead of teams. This has happened in every match besides one where Eastern clinched the doubles point, but did not win the match.

For Woodson, he knows the doubles point is crucial and working together with Kingsmith will bring further success.

“We’ve been telling our selves that the more we stay relaxed, and the more that we know and understand that we’re playing well, the results will come,” he said. “Gage has a really strong serve and strong qualities and if I could just use my quickness at the net and it should put us in a good position no matter if we win or lose.”

“It kind of came out of nowhere, we just started playing well after coach (Sam Kercheval) made the final lineup and I think the result is because we have a different confidence level and who knows what could happen, and we hope we can pull out a win,” Woodson added.

For Kingsmith, he noted having the strong serve will be key and mixing things up within the match.

“I like to serve big early in the match to make sure they can’t get a rhythm,” he said. “I try to mix things up and have that opponent not find that rhythm so I can settle in.”

As the season has progressed, a lot of Eastern players have built better chemistry with each other and for Kingsmith, it shows as he has been teaming up with Woodson.

“I feel super comfortable out there with him, I know what he’s going to do, I know he knows what I’m going to do, it just comes easily.” Kingsmith said. “We don’t have to force anything which is nice.”

For Kercheval, finding those different doubles teams is difficult, but having teams click helps a lot.

“We put them together in the fall because I think they can play and should play the same way,” Kercheval said. “They should serve and crash the net, they should return and come in, and getting them on the same page really helpful because they both know what each other should be doing.”

With Woodson being a senior and coming down to his final matches, Kercheval said this has helped Kingsmith.

“Gage has had a year to grow up, and I think Jared has done a nice job keeping Gage on track, and with Jared being mellow guy, it’s has helped a lot,” Kercheval said.