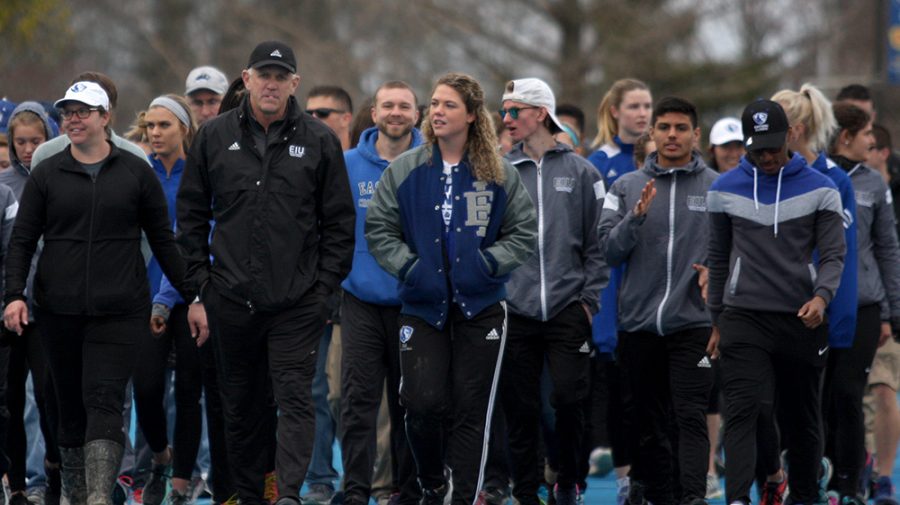 Eastern track and field coach Tom Akers leads the honorary walk around the track for his last home meet as coach Friday at O’Brien Field. The women’s track team placed third and the men’s team finished second in the EIU Big Blue Classic.

Eastern junior Pedra Hicks setting the school record in the 400-meter hurdles with a time of 1:00.35 on Friday in the EIU Big Blue Classic, that was real. The men’s track and field team placing second and the women coming in third, that was also real. The fact that this would be long-time coach Tom Akers’ last home meet was also real, but that was something that had not quite sunk in with him.

“I don’t know if reality has set in yet,” Akers said on Friday. “So, it’s a little bit bittersweet here,but I just want to enjoy the track meet and watch the kids perform well.”

Before the meet began, Akers was honored with a plaque and a crowd of people, including the track and field team, current and former members, joined him on the track to walk an honorary last lap as a group.

“It’s special. I have been around here for so long, you know it’s home away from home this track is for me, always has been and always will be,” Akers said. “It’s a special weekend, I guess with this being the last home meet, but still we have got a lot of season to go so I can’t get too sentimental about it just yet.”

Akers was delivered a great moment to watch very early on in the meet,when Hicks broke the school record in the 400-meter hurdles, something she was not aware she had done until Akers told her.

She was greeted by teammates soon after and the excitement from all of them was hard to miss.

“(I feel) amazed. Good, really good,” Hicks said. “I didn’t really know I was in the lead until I came off the curve after the eighth hurdle, that’s kind of when I knew where I was and everything. So, its just right there, that’s when I determined if I wanted to finish first or settle.”

Settle Hicks did not on that run, as she held on to beat sophomore Erin Down of Western Michigan by .01 seconds and secure first place and the school record.

Akers is not convinced that the new school record will hold through the rest of the season, however. He thinks that both Hicks and teammate Shirley Jones have a chance to break the record and get under one minute as the weather continues to warm up this spring.

The weather conditions on Friday were certainly not optimal to break any school records, and for Hicks, who transferred from Central Arizona Junior College, the cold temperatures are something she is not used to. She said she was surprised herself that she broke the record on Friday.

Eastern’s women’s team had three other individual first-place finishes, Haleigh Knapp in the high jump with a height of 1.73 meters, Grace Rowan in the 1500-meter run with a time of 4:44.87 and Brion Portis in the long jump and triple jump with distances of 5.78 and 12.33 meters respectively.

In the 5,000-meter run, senior Riley McInerney place first with a time 14:40.80. Senior Davion McManis finished in first-place of the long-jump with a distance of 7.26 meters. Senior Ryan Pearce placed first in the discus throw with a distance of 51.45 meters.