Panthers get first OVC win in over two years 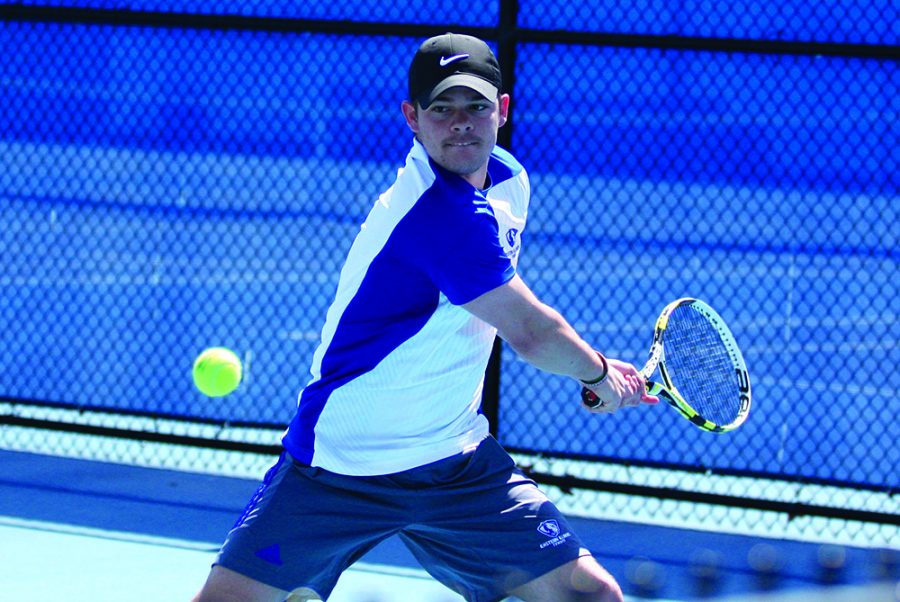 Senior Grant Reiman sends a back hander to his Belmont doubles opponents Friday at the Darling Courts. Reiman and partner Logan Charbonneau lost 7-5 to Belmont as Eastern lost 7-0 overall. The Panthers picked up a win Saturday against Tennessee State.

The Eastern men’s tennis team earned its first conference win since 2016, and its first Ohio Valley Conference tournament appearance since 2014 with a win over Tennessee State Saturday.

The Panthers played its first outdoor home match of the season Friday as Eastern lost 7-0 to Belmont.

Due to inclement weather on Saturday, the Panthers hosted Tennessee State at the Danville Tennis Center instead of the Darling Courts.

Eastern’s win over Tennessee State gave the Panthers a tournament spot. The top six teams qualify for this year’s conference tournament and Eastern did just that winning the match 4-3.
Eastern jumped out to a 1-0 lead in the match as it won at No. 1 and No. 3 doubles over the Tigers.

Sophomore Gage Kingsmith and senior Jared Woodson teamed up at No. 1 doubles to beat Jackson Gwinn and Larry Sloan, 6-4.

It was the seventh doubles win of the spring season for Kingsmith and Woodson as they are now 3-1 in doubles play in OVC action. Senior Grant Reiman and freshman Logan Charbonneau helped the Panthers clinch the point at No. 3 doubles with a 6-4 win over Tanishq Mahendru and Shashank Nautiyal.

“For the Tennessee State match, we took care of business when we had to and I’m happy to see the guys playing well,” Charbonneau said. “Jared and Gage are going off in doubles, Freddie (O’Brien) and Trent are always really hard to beat no matter who they play and Grant has been holding it down for us.”
The Panthers won the match as they scored points at No. 1, No. 3 and No. 4 singles.
Freshman Freddie O’Brien won his match at No. 1 singles over Stefan Koruga with a second set tiebreak. O’Brien posted a 6-4, 7-6 (9-7) victory giving him his ninth win of the spring season.
Charbonneau won 6-1, 6-3 over Gwinn at No. 3 singles while Kingsmith posted a 6-1, 6-4 win over Sloan at No. 4 singles to help push the Panthers to a win.

“I actually didn’t realize it’s been a while (since I won a match), but nowadays I don’t care what happens in my match as long as we can win as a team,” Charbonneau said. “It’s all about how I can help the team now since it’s almost postseason.”

With the good week of practice and warmups, the results showed, coach Sam Kercheval said.

“I was really proud of the guys (Saturday),” Kercheval said. “Not just because we got the win but because they all put in a great week of practice. They were locked in from the moment we got in the van on Saturday morning. Warmups was the best we had all year.”

Kercheval also said it shows that the team was prepared, focused the right way and it paid off.

“Right after the match I told them I was proud of how we worked all week and to get the result was obviously great,” Kercheval said. “I told them to enjoy the rest of the day and the off day, but to come ready to work because we have two matches left in the regular season and they’re both winnable. There is still a lot we can improve, and I want them to stay hungry and striving for more.”

The Panthers’ lone doubles win Friday against Belmont came from O’Brien and senior Trent Reiman winning 7-6 (8-6) over Stephen Goldman and Zak Khan at No. 2 doubles. The Bruins claimed the doubles point with a win at No. 1 and No. 3 doubles.
In singles action, Belmont won all six points in straight sets. O’Brien played at No. 1 singles but lost the opening set in a tie-breaker, 7-6 (7-4), before falling 6-2 in the second set to lose the match to Hendrik Inno. Trent also battled at No. 5 singles but lost to Stephen Goldman, 6-4, 6-3.

Eastern is 5-15 overall, 1-4 in the OVC. The Panthers wrap up OVC play Saturday at Austin Peay.