Tunnel of Oppression calls attention to challenges faced by minorities 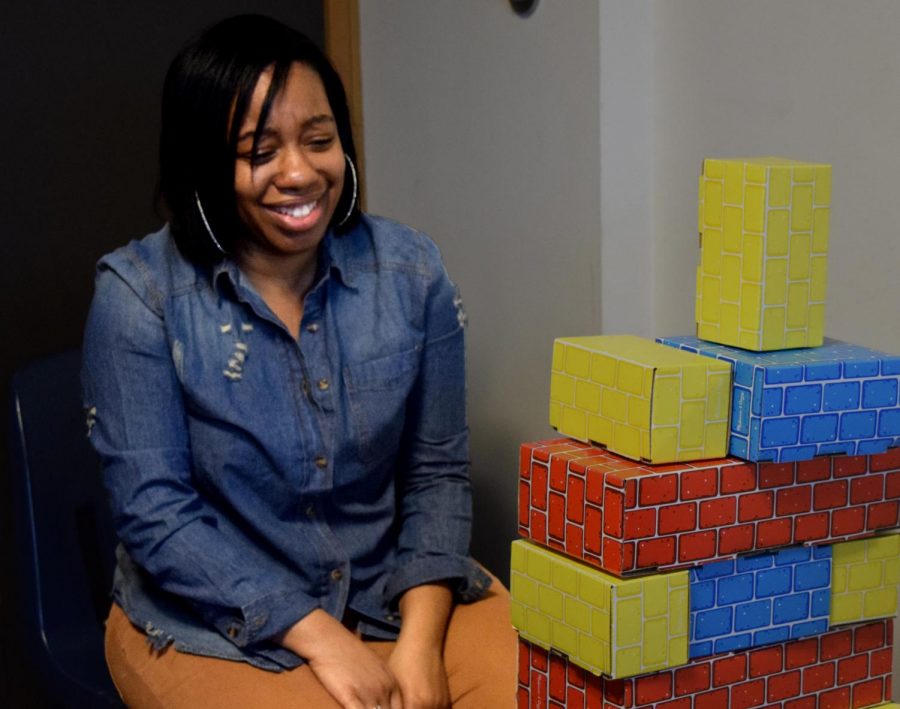 LeLonna Goodson, a communication studies graduate student, is pictured at Tunnel of Opression Tuesday night in Thomas Hall. She built a tower with the “restrictions” given to her on a card, to showcase the importance of noticing a person’s strength versus their disability.

A day in the life of a minority at a predominantly white institution, a domestic violence survivor, a Muslim, an Atheist, a member of the LGTBQIA+ community and a visually impaired person were all shown at the Tunnel of Oppression.

The tunnel, which was a part of the Residence Hall Association’s Social Justice and Diversity Week, was held Tuesday night on the fourth floor of Thomas Hall.

One room on the floor held presenter Raya Petty, a graduate student in communication studies, who discussed problems minorities face when attending a predominantly white institution.

A wall of the room was covered with quotes from Eastern students who had faced some form of discrimination for being a minority and who felt they were treated differently than their mostly white classmates.

Another quote read, “I think that since (minorities) are looked at to fail or not do as good as others, our work would be looked over more strongly and harshly than other students’ work. They hold us to a higher standard than everybody else.”

Petty said she had found that minorities tend to negotiate different conflicts that arise because of the expectations and stereotypes placed on their race, and she wanted to draw attention to this and force non-minorities to recognize this.

Another room featured ‘the clothesline project’, which is aimed at bringing awareness to sexual assault by displaying T-shirts that have stories from survivors of sexual violence written on them.

Mackenzie Calabrese, a senior psychology major and intern at Housing, Outreach, Violence and Education, said she likes the clothesline project because it helps survivors share their stories as a group, which hopefully helps them cope and heal.

Another room was led by Tajoar Ahmed and Rohan Mehta, both graduate students in sustainable energy, and was focused on religion.

Ahmed is a Muslim, while Mehta is an atheist, and both wanted to be able to answer any questions people might have about their specific religion or lack thereof.

“I think Charleston is a very closed place, and people don’t know about other (religions),” Ahmed said. “I think there is a need for spreading the word (about) diversity.”

The theme of another room was discrimination of the LGBTQIA+ community, with presenters who were all members of EIU Pride.

Members of EIU Pride set up a simulation of someone being harassed because of their sexuality.

William Harrison, a junior sociology major as well as a presenter in the room, said they wanted to give people the experience of being oppressed or judged based on their personal traits.

“We’re doing this, as an organization, to help out with the entire message of (the Tunnel of Oppression) and give more awareness for oppression in a much more upfront, first-person narrative, instead of people hearing these stories but not being able to relate to them,” Harrison said. “With this we flipped the roles so … straight people could kind of see or envision a world where they were oppressed on the same level as queer people for their actions and to show how constricting that is.”

“Ability status” was the name of the room that showcased ability versus disability with a block activity.

The room focused on showing how people with disabilities are still able to have strengths and are important members of society, said Amber Salutric, a sophomore with a double major in communication disorders and sciences and Spanish.

There was also a visual impairment room and a hearing impairment room, which both worked to highlight the difficulties faced when living with either of these issues, and the strength it takes to overcome them.

Lauren Bergholz, a housing and dining complex director as well as one of the organizers of the tunnel, said it is important for students to educate themselves about diversity as Eastern becomes more global.

“I think our student population is changing, we’re reaching out to new schools and it’s important to make sure everyone is feeling welcome,” Bergholz said. “We’re educating each other, (because) it’s not always on minorities to educate us, so (the tunnel) is just a way that we can all work together to get educated.”