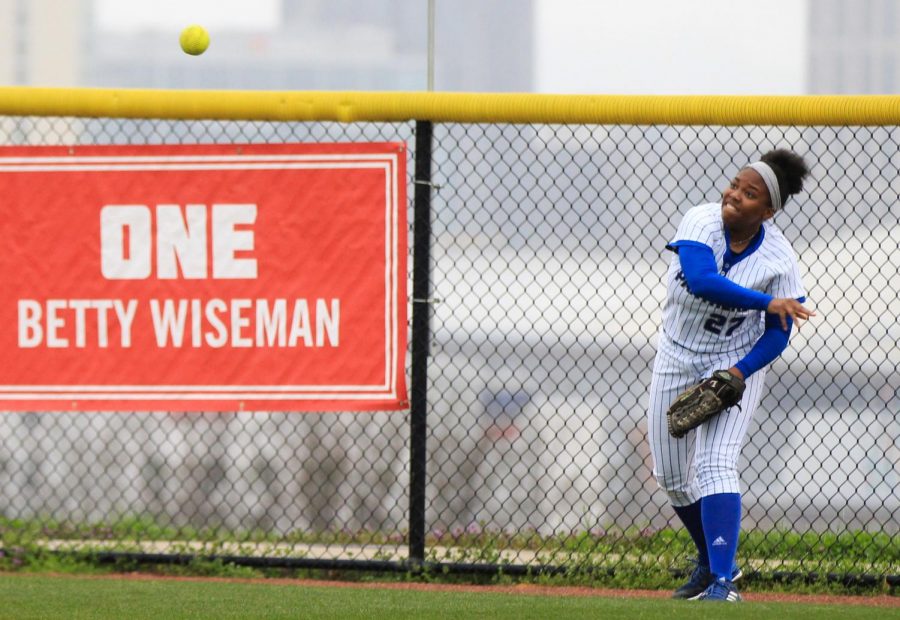 Panther outfielder Mia Davis throws the ball back to the infield during a game against Belmont of Saturday. Davis’ bat helped lead Eastern to a two-game sweep over the Bruins.

Everything is clicking for the team right now at 24-8; just do not tell them that. The Panthers host Butler Wednesday at Williams Field to make up for Tuesday’s rainout.

“I hope that we can credit our hard work and focus in practice,” said coach Kim Schuette. “This group is different than some other teams that I’ve coached, because sometimes in softball or baseball it becomes monotonous.”

Wireman was named OVC Pitcher of the Week Monday.

“Jessica is a highly determined player, who is a senior and has set her goals and eats, sleeps and dreams those goals,” Schuette said. “What I can say for Jessica is her workouts and her bullpens that she does with our catching and pitching staff, her expectations are very high and I think that helps lead to good performances on the field.”

Butler has not played since March 18, which was a 2-1 win over Florida A&M. The Bulldogs (9-16) have struggled to score runs and besides Alyssa Graves, the pitchers have struggled to keep opposing runners from crossing the plate.

Graves has a 1.55 ERA, but a 4-7 record with the lack of run production in Butler’s lineup.

The Bulldogs are 2-1 against OVC opponents this year going 1-1 against Belmont and picking up an 8-0 win over Tennessee State. All three games ended in shutouts.

Rainy weather canceled Tuesday’s game and Wednesday’s game is also still up in the air since the tarp stayed on Williams Field all day Tuesday.

Schuette said she hopes Eastern and Butler can get the game in even though it is a non-conference game, but does not want to risk anything if the field is not ready.

Eastern hosts Southeast Missouri in a doubleheader for its OVC home opener Friday.

Schuette uses the term “shooters” to describe her players who find ways to make big impacts on the game.

Eastern is still hoping for a few to come around, but Schuette has been pleased with how the team has approached each game as “challenges.”

She said the Panthers have embraced that and it has helped with their performance.

In last year’s game, senior Tori Johnson drove in both runs in the fifth and the seventh to lead the Panthers to a 2-0 win over Butler on the road.

Wednesday’s game with the Bulldogs is set to start at 4 p.m. weather permitting.