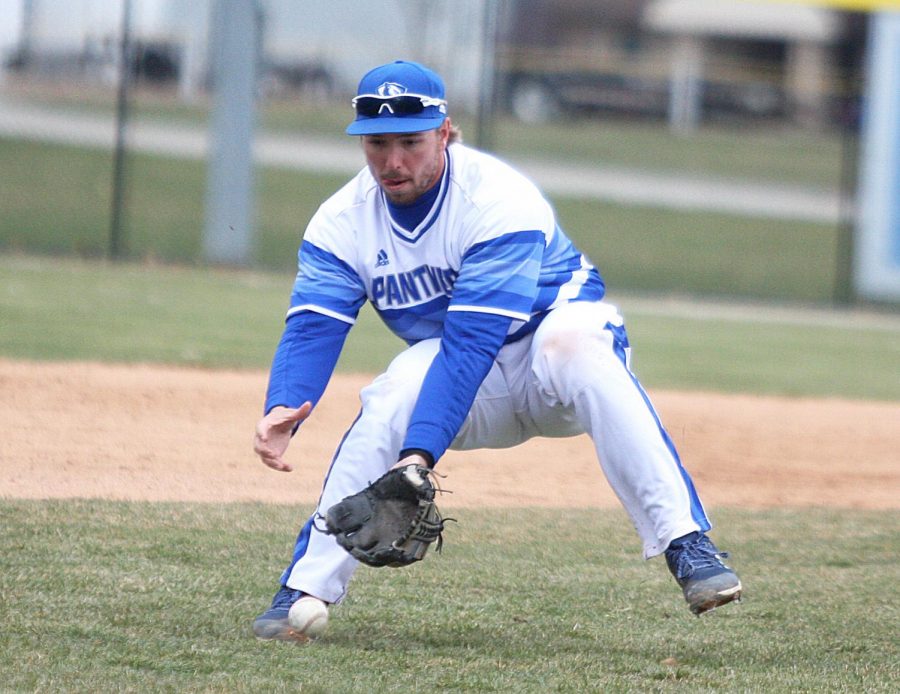 Senior Dougie Parks fields a bunt in Eastern’s loss to Indiana State March 20 at Coaches Stadium. The Panthers’ game scheduled for Tuesday at Saint Louis was canceled, but the Panthers are at home this weekend against Tennessee Tech starting Thursday.

Colleges commonly have rivals within their conference; however, the Eastern baseball team has their eyes set on one school: Illinois State University.

“Illinois State is a rivalry for sure,” redshirt junior catcher Hunter Morris said. “Everyone agrees that’s probably our biggest rivalry.”

Separated by 104 miles, the Eastern baseball team has always seen Illinois State as their longest and most memorable rival. With Illinois State founded in 1857 and Eastern in 1895, it’s no surprise these schools have battled it out for over 100 years.

Due to the history and short distance between the colleges, their rivalry is imprinted into each institution’s mentality. When it comes to Eastern and Illinois State, competing against each other in America’s pastime is more than a single game.

“Facing a close opponent, let alone an in-state opponent, is a game we always look forward to,” senior first basemen Matt Albert said. “We want to be the ones who control the (Central Illinois) region.”

For each school to attempt at controlling the region, it begins long before the baseball season starts. To succeed each other, it becomes a competition between the schools to have a greater recruiting class.

“Since our schools are so close, we both want the best recruits in the area, and that definitely adds to the rivalry,” Albert said.

Albert was a part of the recruitment rivalry, as prior to committing to Eastern, he was recruited by Illinois State. He said this gave him a personal rivalry and a stronger drive to beat them.

Both colleges do not play as often, creating a greater tension when the two play each other. The last time the Panthers and Redbirds faced off was two years ago, when Eastern won 2-1 in a pitcher’s duel.

As enjoyable as it was for the colleges to play once this year, the Panthers have their eyes set on turning around their conference play. At an overall 9-14 record, the Panthers have been just shy of putting together every component to compete with the elite OVC teams.

After the game against Illinois State, six of the next eight games will be against conference teams, including 7-2 Southeast Missouri and 6-3 Belmont in conference games.

In the OVC, Eastern ranks third for pitching with a team ERA of 5.39 and fifth in team fielding percentage at .968. However, their team average of .255 ranks eighth ,and the Panthers knows where improvements must be made.

“We are just trying to find ways to be clutch,” Albert said. “We have had plenty of opportunities to drive in runs, but we’re unable to cash in. Once we find our groove, we will be dangerous.”