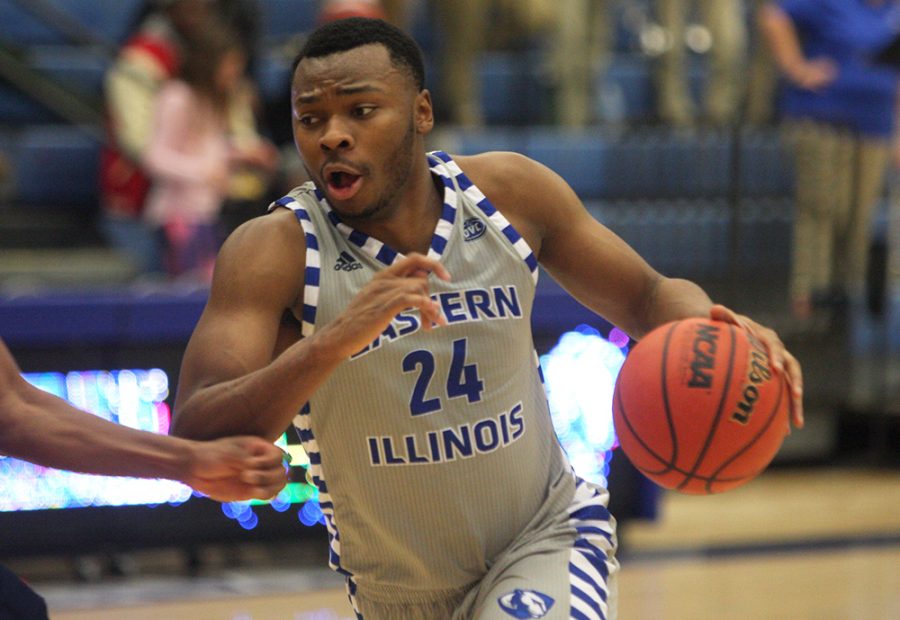 Eastern junior Jajuan Starks drives the ball in a game against Tennessee-Martin on Jan 13. in Lantz Arena. Starks is one of four players, including D’Angelo Jackson, Michael Chavers and Justice Green transferring from Eastern.

The Eastern men’s basketball team is going to need to hit the recruiting trail hard this offseason as eight players are leaving the program.

Four were expected with graduation in May, but Eastern coach Jay Spoonhour said Jajuan Starks, D’Angelo Jackson, Michael Chavers, and Justice Green have decided to transfer from the program.

While this may seem like a large hole to fill for the Panthers, Spoonhour said it is actually expected in today’s game.

“I think it’s fair to say they’re all leaving on good terms with me,” Spoonhour said. “Guys want to be able to play and contribute more, and I completely understand that.”

It is too soon to know where these guys are headed to continue their play, but Spoonhour said that Division II is an option that many transfers continue so they do not have to sit out a year under the Division I eligibility rules.

But then there are guys like Starks who played well against Division I teams this past season, so his options may be more widespread.

In fact, Starks’ best game with Eastern came against a power five conference opponent in Marquette where he scored 27 points on nine field goals.

He also dropped double-digit points against teams like Nebraska and San Diego State.

Conference play did not go as well for him though, and playing time started to dip as did his role with the team.

Jackson also becomes a tough loss for the Panthers as he was another go-to scorer before he injured his ankle.

He played in just 17 games this year while starting nine of those, but after missing time he struggled to find his stride as he scored just 20 points total in the five games after the injury.

Chavers and Green were not so much up and down as the other two; instead, they struggled to find a role on the court all season.

The big thing here is that all four came in as transfers just a year ago, and now the Panthers have to turn around and hit that same trail to find more.

Eastern still has plenty to build off with the core of its roster as guys like freshman Mack Smith or returning senior Terrell Lewis are bound to lead the team.

On the other hand, seniors Montell Goodwin, Muusa Dama, Ray Crossland, DeVantae Price are headed out after graduation.

Adding depth will be key for Eastern, but the team does have its big men still with Lucas Jones and Aboubacar Diallo returning for their senior seasons.

Logan Koch fills in some depth behind Lewis at the guard position, but the Panthers always add transfers at those positions every year.

With all this behind them now though, Eastern has the rest of its offseason to get back into a contending roster.