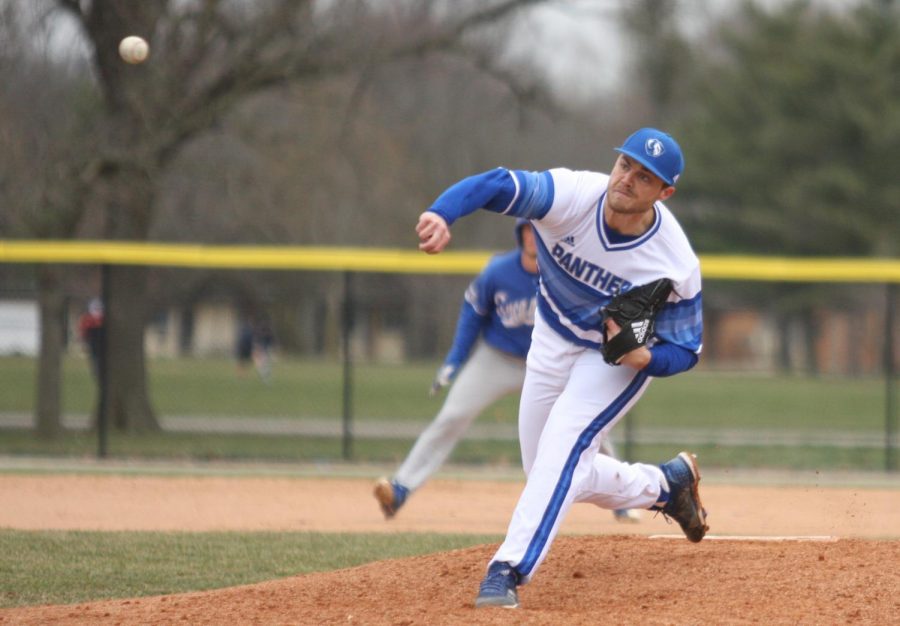 Eastern pitcher Jake Haberer hurls a pitch in a game against Indiana State at Coaches Field on March 20, the Panthers lost the game 8-10. Haberer has a 1-1 record and a 6.75 ERA.

The Eastern baseball team dipped back into OVC play at Murray State, and all it left with was the same problems it came in with.

The Panthers are searching for offensive consistency, but they struggled with that against the Racers as the scoring came in spurts.

Eastern has had this tendency early on in the season; the team will either load up for four runs in two innings like they did in game two over the weekend or muster just one run in the final four innings of that game.

That led to a 13-7 loss for the Panthers in that one, and that was actually their best shot at a victory in the entire series.

Five runs came in for Murray State in the fourth inning, and Eastern’s bullpen could not contain them much longer as another five filed in the next two innings.

The Panthers continue to show small samples of what potential they have, but in series like this, there is not enough in the clutch moments.

Eastern allowed the three go-ahead runs in the bottom of the eighth in game one with the help of two home run balls.

That is a tough loss to swallow considering winning games on the road is no easy task.

But to top it off, the Panthers’ ran out of gas in the finale Sunday in what ended in a 5-0 shutout loss.

Although losses like that have been the trend for Eastern, some guys in the batting order are still coming up big.

Senior Dougie Parks is one of those with a .295 average in the middle of the order, but his ability to hit for power is going to be important in conference play for the Panthers.

It may have not been enough against the Racers, but Parks had his best game Friday, going 2-4 at the plate with one of those being a home run which marks his sixth on the year.

But, what Josh Turnock has been up to at the plate has been most impressive.

Turnock continues to lead the Panthers in hitting, knocking it around for a .405 average this season and that continued over the weekend with five hits and three runs scored.

While the hitting has come through at times, the Panthers are back to searching for answers on the mound as Murray State racked up 25 runs in the series.

Michael Starcevich suffered the loss in the tough 7-4 defeat after he allowed three runs in 1.1 innings.

The Panthers do get a chance to get back on track, but they will have to do so on the road in the mid-week affair against Saint Louis Tuesday night.

That will be a slight dip out of conference play before returning home to play Tennessee Tech next weekend.