Fetty Wap to be this year’s Spring Concert performer 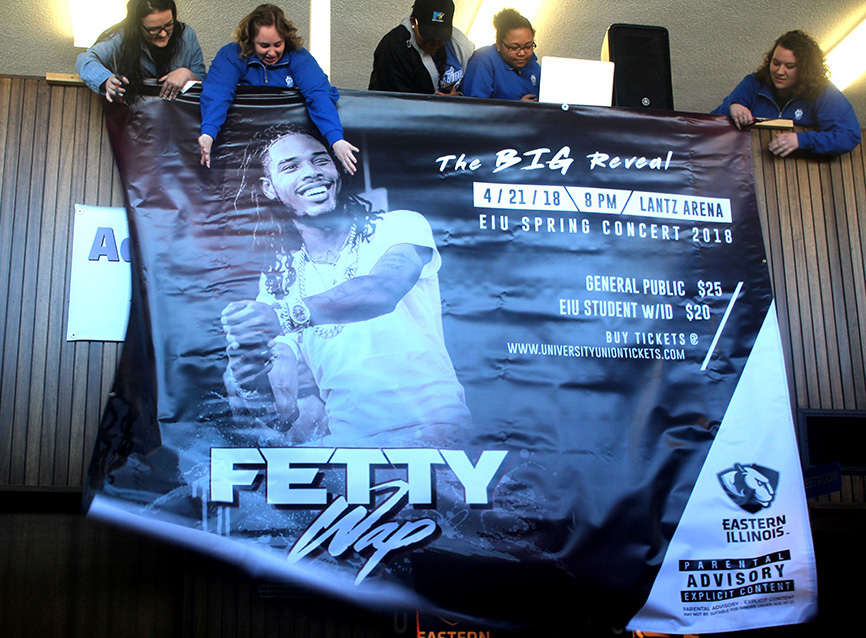 Members of the University Board drop a banner revealing the name of rapper Fetty Wap, who will be performing at the Spring Concert at 8 p.m. on April 21 in Lantz Arena.

Rapper Fetty Wap will be the performer for this year’s Spring Concert at 8 p.m. on April 21 at Lantz Arena.

Members of the University Board unveiled this year’s performer during the Big Reveal Thursday afternoon in front of students who gathered next to the Martin Luther King Jr. University Union Food Court.

Alec Baumgartner, a technology graduate student and a graduate assistant in the student life office, was involved with planning the event and said the artist had been decided on about a month or two ago.

“We’ve been tight with money as a university and we had to pick out an artist that fit the interests of the students the most. It’s about the dates that the artists are available too,” he said.

Baumgartner said after working with the agents of multiple artists, it turned out Fetty Wap was the best option available at the time.

A survey was sent out to undergraduate students, he said, but most of the artists were already booked up so they needed to come up with a good solution for the university.

Baumgartner said back in 2016 a lot of students wanted Fetty Wap to come perform, but as a result of scheduling they were not able to get him.

“I think a lot of students will be coming to the show to see the artist they’ve been waiting for. It’s mainly about giving the students what they want,” he said.

Mariah Marlar, a junior public relations major, said she was happy that the unveiling was done successfully and there was a positive reaction from the crowd who watched the banner drop.

“I’ve never seen Fetty Wap live but I’m excited for the performance he will bring. From what I’ve heard, it’s always a good show,” said Marlar.

Emonie Jordan, a senior Kinesiology major, said she felt that a good amount of students showed up to the reveal but she understood many had to be in class.

“I’m a fan of Fetty Wap. I’m happy that they found an artist that’s more relevant to our generation. I’m definitely going to the show,” she said.

Ishmael Williams, a senior business major, said that the outcome of the reveal was good, but he thought it was more exciting when it was done at an Eastern basketball game last year.

“I’m very excited that Mr. Wap is coming to Eastern. I think he’s a much better option than the artist last year. I also like the fact that Fetty Wap is African-American since we don’t get a lot of those artists on campus. A lot of different people like Fetty Wap though, so I think overall the outcome will be great,” he said.

Tickets are $20 for students and went directly on sale after the artist was announced. They will be made available to general public for $25 after March 29.

They are available for purchase at The Ticket Office inside of the Union or online at universityuniontickets.com.