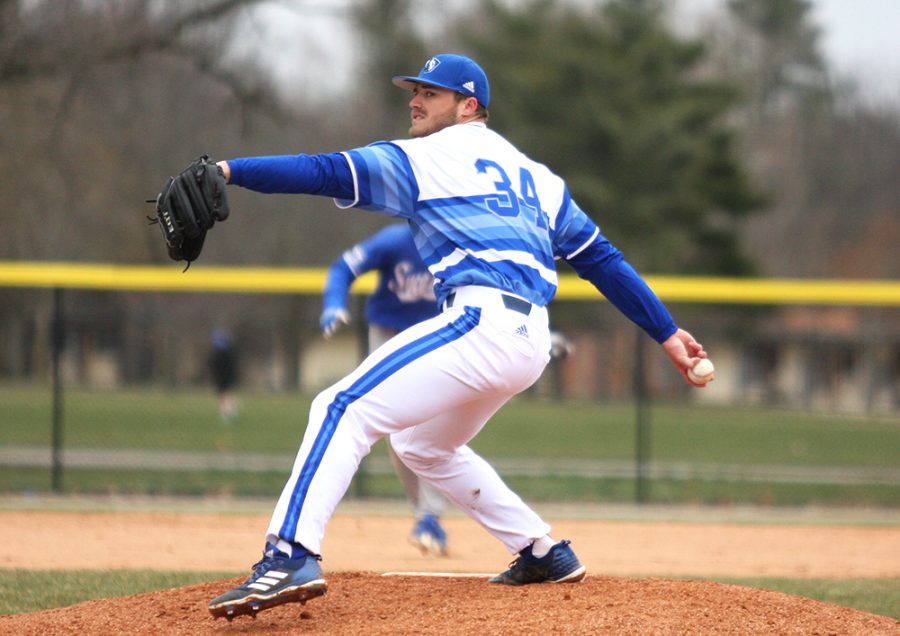 Redshirt senior Jake Haberer fires a pitch in the top of the fourth inning in the Eastern baseball team’s 10-8 loss to Indiana State Tuesday at Coaches Stadium. Haberer pitched 2.1 innings and gave up four runs.

Trouble at the mound for the Eastern baseball team gave Indiana State the opportunity to snatch the midweek game from the Panthers after the Sycamores handed them a 10-8 loss Tuesday.

Coach Jason Anderson said his pitching staff walked one too many batters in Indiana State’s lineup, an issue stemming from extended use of his bullpen in last weekend’s three-game series against Jacksonville State.

“You get a little short on the weekend, (and) you’ve got to look for a use for guys in different ways, and that really hurt us today,” Anderson said of Eastern’s pitching struggles.

Eastern walked seven Sycamores throughout the game and did so back-to-back at the top of the fourth inning. The Panther pitchers did manage to strike out nine batters, with senior pitcher Michael Starcevich collecting three of those strikeouts.

Indiana State used just as many pitchers as Eastern as each team brought out five arms to battle at the mound. The Sycamore’s ace, Tyler Whitbread, claimed the win while the loss was assigned to senior pitcher Jake Haberer.

Whitbread put up some decent numbers in the Sycamore’s 17th outing this season. He raked in six strikeouts, and Whitbread advanced to 1-1 on the year.

One of the biggest struggles Anderson said his team faced against the Sycamore pitching rotation was pitches near the strike zone.

“We’ve really been struggling to hit the fastball, and we did it again today,” Anderson said.

The Sycamore’s dished out 16 Panther strikeouts, with many of them coming off a fastball.

That was Albert’s third home run of the year.

The Panthers inched closer to a lead as the bats came alive in the second half of the fourth inning. Parks batted in junior second baseman Jimmy Huber to put the Panthers’ sixth run on the board.

A potential lead began to slip away from Eastern when Indiana State’s Max Wright batted in two runners at the top of the sixth inning to push the Sycamores’ lead to 10-6. Eastern scored runs just one more time to finish out the seventh inning.

Turnock reached on a throwing error by Indiana State short stop Clay Dungan. Sophomore catcher Ryan Knernschield and senior left fielder Logan Beaman both scored on unearned runs to give the Panthers their final tallies of the afternoon.

Anderson said his veteran team has the potential to make something of this season. There are a few tweaks Anderson said he would like to see in the team’s Wednesday outing against Robert Morris-Springfield.

“They’re experienced, and they’re talented, but they don’t play aggressive. We just have got to play aggressive and just go after wins and not just play to the level of the competition and what they’re doing that day because we’ve done that a lot this year,” Anderson said.

Eastern dropped to 8-11 on the year. The win advances Indiana State to 13-5 for the season.