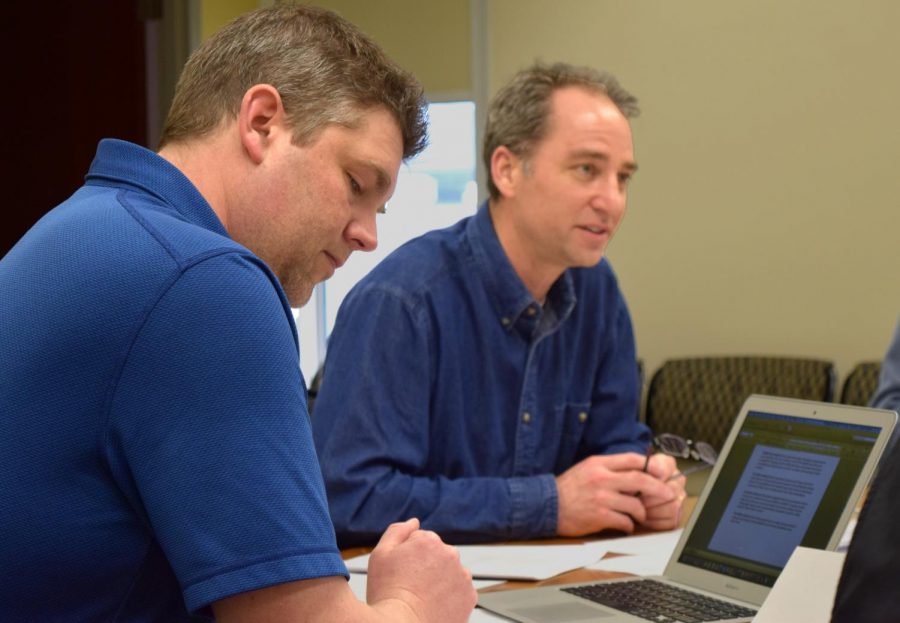 Jemmie Robertson, professor of trombone euphonium and Faculty Senate chair, listens to Jeff Stowell, psychology professor and vice chair of the Faculty Senate, Tuesday in Booth Library. Stowell will continue making rounds to different committees to get feedback on the shared governance.

The next steps being taken following the Workgroup Review Committee’s final recommendations were discussed at the Faculty Senate’s meeting Tuesday.

Provost Jay Gatrell said for the past week, he has been taking shareholders around and gotten feedback on a possible college reorganization plan that will be released soon.

Gatrell said he is collecting feedback from all facets of campus, especially the faculty.

“I believe faculty innovate best when they have an opportunity to discuss and explore things that work for them,” Gatrell said. “I think the best laid plans from administrators sometimes are great, but we have to have something that resonates with our identity and our structures.”

Biological sciences professor Billy Hung said the vitalization project was, for the most part, more successful than how some schools have dealt with the nationwide cutbacks to higher education.

“What we are experiencing at EIU from the last two years is the result of a budget crisis that is not necessarily unique to us nor unique to Illinois,” Hung said.

He said some universities are going through the same problems as Eastern without a budget crisis, partially because of their strained relationship with the administration.

“(Eastern has) a functional relationship with our admin,” Hung said. “We are pulling together as a team despite our differences and contradictions, and we are working together to make our institution stronger and better for the future years.”

Economics professor Teshome Abebe said this relationship with the current administration was not present for past administrations, which is why a standing committee like the one review committee recommended, which would keep an eye on enrollment and budget, is an important idea.

“The last two administrations (at Eastern) that just literally slept while things were coming to pass, those kinds of things would have been questioned (by a standing committee),” Abebe said.

A resolution to commemorate the 160th anniversary of the Lincoln and Douglas debate was also presented and will be voted on, with some minor changes to the language, next meeting.

The resolution proposed offering a lecture on the importance of this debate to current democracy and starting a campus-wide recognition of the anniversary.

During the meeting, the Faculty Senate officially approved Gary Aylesworth for the Distinguished Faculty Award.

Aylesworth is a philosophy professor who has been working at Eastern for the past three decades and who is being rewarded for his contribution to the philosophy department, curriculum and students.