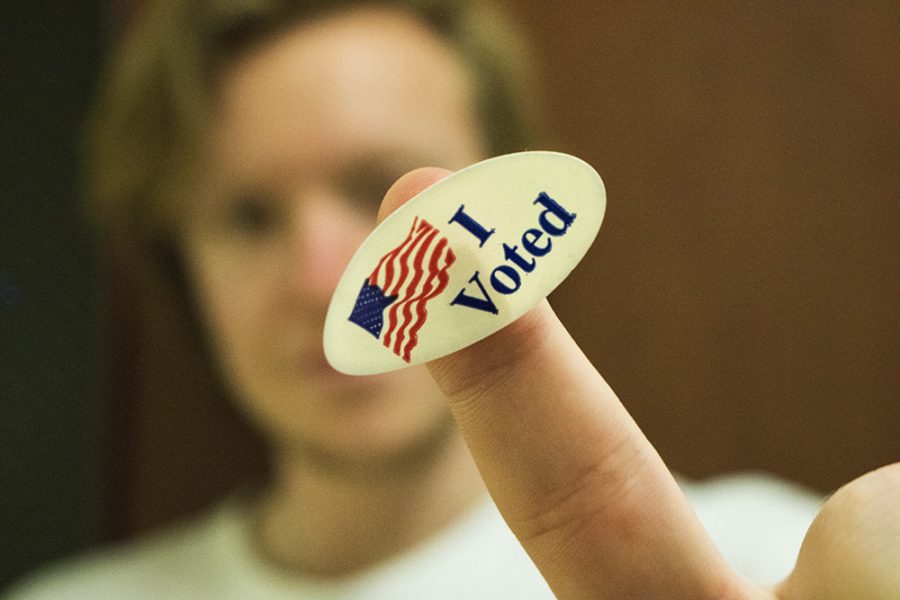 Those who were registered to vote Tuesday night received an "I Voted" sticker after turning in their ballot.

As people gathered to cast their votes in the primary elections, election judges and community members shared their opinions on the candidates, why it is important to participate in the elections and how the voter turnout compared to previous years.

“It’s been a good turnout so far, but it’s never as high as we’d like to see it. The percentage is still low for the number of registered voters,” said Andy Cerver, an election judge at the Newman Catholic Center polling station.

He said there is always an issue with voter turnout in the primaries because people do not want to declare their political party.

Ana Lawless, a Charleston High School student serving as an election judge at the Newman Catholic Center, said she had not seen many students present at the polls.

“I don’t think a lot of people knew about this election because it wasn’t presidential,” she said.

Lawless was nominated along with other students taking a civics class to serve as a judge in the election.

Election judge Esther Lutz said she had served as election judge many times and did not think the turnout would be as “lopsided” as it was.

“I think the turnout has to do with what races are contested. So far the Republicans are outweighing the Democrats by quite a bit,” Lutz said.

Jenna Rossi, a senior health studies major, said she usually votes Democratic but wanted to look at the ballot before making a decision on who to vote for.

“I love the fact that we have the right to vote and my voice matters,” Rossi said.

Rossi said she wanted to vote in the primaries because she wants to ensure that the best candidates make it into the general election.

“I want people elected who will put more focus into fixing the education system,” said Rossi.

At the Martin Luther King Jr. University Union voting poll station, election judge Teresa Sims said the Democrat and Republican turnout was just about even and about half the voters were Eastern students.

“There’s not usually a lot of voters. It’s usually just students and people who live near here because it’s by (their) precinct,” she said.

Andrew King, a senior kinesiology and sports studies major, said he wanted to vote for someone who cares about taking care of the police force for sheriff.

“I really wanted to come out and support Jimmy Rankin for sheriff and Terry Davis for state representative,” King said. “Bruce Rauner seems better than the other options. They seem to have great morals and integrity.”

King said he supports Davis because he speaks his mind and cares about the local community.

The voting turnout at the Union voting poll station began to pick up throughout the evening in comparison to earlier in the day.

Eastern alumnus Thomas Smith said he abstained from voting for governor but voted for Davis for state representative.

“Why do you have to chose to vote for either Democrat or Republican?” Smith asked.

“If people didn’t come out and vote today why, why the hell bother caring about making a difference in the world.”