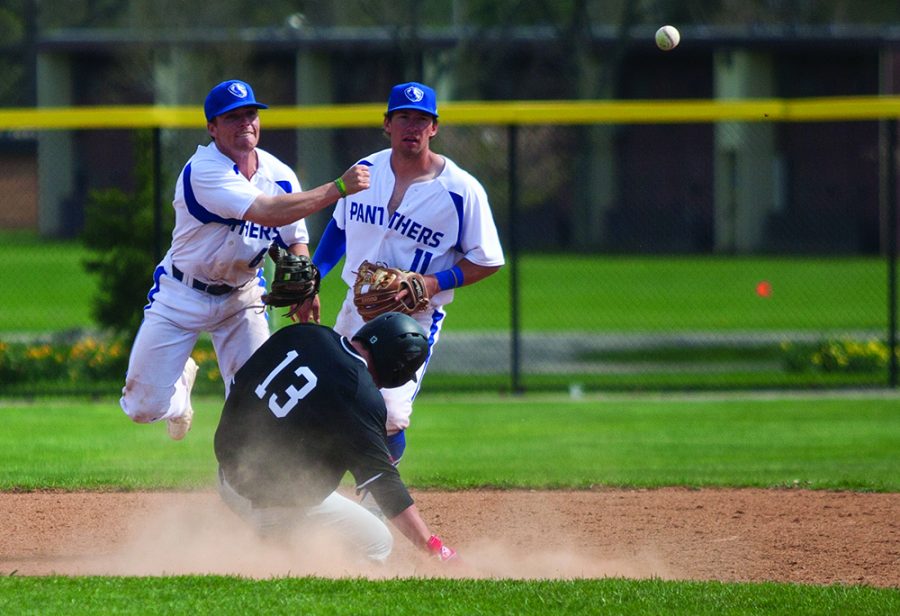 Senior Andrew Curran throws to first for a double play after getting Southeast Missouri's Josh Haggerty out at second base in Eastern’s game April 2017. The Panthers lost two out of three games to Jacksonville State to open OVC play.

Whether it was overcoming a five-run deficit to earn its first Ohio Valley Conference win or a bench clearing brawl at home plate, it is safe to say the Eastern baseball team had an eventful home-opening series against Jacksonville State.

Game two held the meat of the action and the Panthers maintained plenty of poise in that one considering a five to nothing lead after two innings was not enough to keep them down.

But, the biggest story to come from the weekend is from the bottom of the eight in that game as a fielder’s choice led to senior Frankie Perrone being thrown out at the plate for Eastern.

Junior Jimmy Govern was grazed by a pitch in that same inning which led to some frustration already, but the play at home was the tipping point for both teams which led to all 25 Panthers meeting Jacksonville State on the field for a fight.

Eastern coach Jason Anderson said three members of his team have been suspended by the NCAA as well as four more guys from Jacksonville State.

“This stuff happens in baseball,” Anderson said. “It looked to me like it was a clean baseball slide to the plate, and there was no intent behind it.”

Despite all this chaos, the Panthers’ pitching is what made the difference in the actual game, and that led them to a 6-5 victory, which would end up being their only one of the series.

Dougie Parks did his damage at the plate, knocking out two home runs in the game while finishing with four RBIs on the day to begin the rally that led to the game two win.

Other than that, Eastern just could not find the offense when needed over the weekend; in fact, the team could not score at all in the other two games of the series where they were outscored by a total of 18-0.

And that is what Anderson is looking for most in the team as a single-game matchup against Indiana State awaits on Tuesday at home.

Eastern’s pitching has been much improved from a year ago, and Anderson said the depth of the pitching staff has played a big part in all the success.

In the Panthers’ lone win this weekend, the bullpen came up big to close that one out, and it was senior Michael Starcevich tossing the most important pitches which earned him his fourth save of the season.

The 1-2 opening weekend in conference play also is not something that has Anderson worried at all.

“We’ve got some fight in us,” Anderson said. “We’re talented enough to beat teams in a good way, but we just need some more offense.”

With a rollercoaster weekend in the books, the Panthers now gear up for an important part of their schedule as Tuesday’s game is followed by another against Robert Morris University at home.

Those two home games may prove to be a difference maker as Eastern searches for some more momentum ahead of next weekend’s OVC series on the road at Murray State.

“It was an eventful weekend, but at 8-10 on the season I think we’re in good shape to keep getting better,” Anderson said.