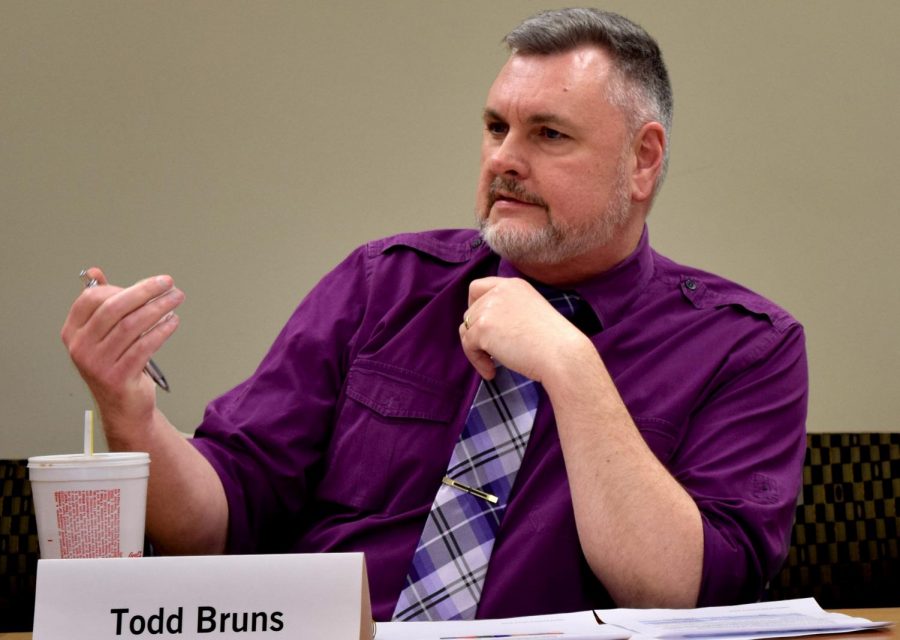 Todd Bruns, the institutional repository librarian and member of the Faculty Senate, was a part of the Workgroup Review Committee whose final recommendations were discussed during a Senate meeting Tuesday in Booth Library.

The new shared governance model proposes the senate becomes an all-encompassing body, where all members of the other listed committees would be a part of the Faculty Senate. This means the senate would now consist of 30 to 50 members with two to three meetings a semester.

In this model, the senate would take more curricular responsibilities by officially approving program changes that would greatly affect the campus, while CAA would still approve minor changes and new programs.

This change could help accommodate Eastern’s campus as the number of faculty have dwindled over the past couple of years, Stowell said.

“We are starting, I believe, to see the effects of fewer faculty, particularly Unit A faculty, on campus,” Stowell said. “The deadline has now passed for submissions for elections (for campus organizations), and we have 14 positions for which people are running out of the 30 that are open.”

Institutional repository librarian Todd Bruns said if the campus cannot currently fill 30 positions, he does not think it will have more success filling the 50 positions proposed in the new model. The more people added to the senate, the less focused it could become, he said.

“(The Faculty Senate), as is, meets every two weeks, (and) we have the ability as a body to look at issues that are affecting the campus,” Bruns said. “In this model, I’m concerned that that focus could be really watered down.”

Bruns said the senate does not always get through every issue it is presented with during its meeting every two weeks, and he is worried about the effectiveness of the proposed senate in the new model.

History professor Bailey Young said the senate may lose some of its worth if it becomes the proposed size in this draft.

“Fifty is a big number, and that’s going to change the whole temper and tenor of the conduct of business. A lot of the value of Faculty Senate as it works here, in my experience, has been the possibility of spontaneous interactions,” Young said. “If you’re meeting a couple of times with 50 people and an agenda with items that have to be moved quickly, you’re not going to have that.”

Philosophy professor Grant Sterling said he is not sure he sees the proposed value in making such changes, as just calling members of other committees a part of the senate does not improve communication between the two bodies.

If such a model were approved, it would have to be justified by the university, not by the Higher Learning Commission recommendation from 2014 to improve campus communication, economics professor Teshome Abebe said.

Stowell said he will continue to take the model to many different committees on campus to get their feedback.

He said he hopes to have a change implemented by Fall 2019.

Also at the meeting, the Faculty Senate approved a resolution endorsing a recommendation by the Workgroup Review Committee to establish an ongoing committee tasked with identifying current and future challenges and trends affecting higher education.

The resolution stated that this committee should be composed “in equal measures” by members designated by administration and the Faculty Senate.

The Workgroup Review Committee looked at recommendations made by vitalization project Workgroup No. 8 and 9.

Workgroups No. 8 and 9 looked at ways to reorganize the university’s colleges and new programs, among other things, during the vitalization project.

The resolution acknowledged that the senate discussed the findings of the Workgroup Review Committee, and, although not all items were agreed upon, the senate was appreciative of the ingenuity of the proposals.

The University Naming Committee, which was tasked with looking at the senate proposal to rename Douglas Hall, voted against the proposal at a meeting last week.

Bruns said he was disappointed with the negative vote from the committee, and, although he admits he was not present to hear the arguments against the proposal, he does believe the committee dismissed the idea too quickly.