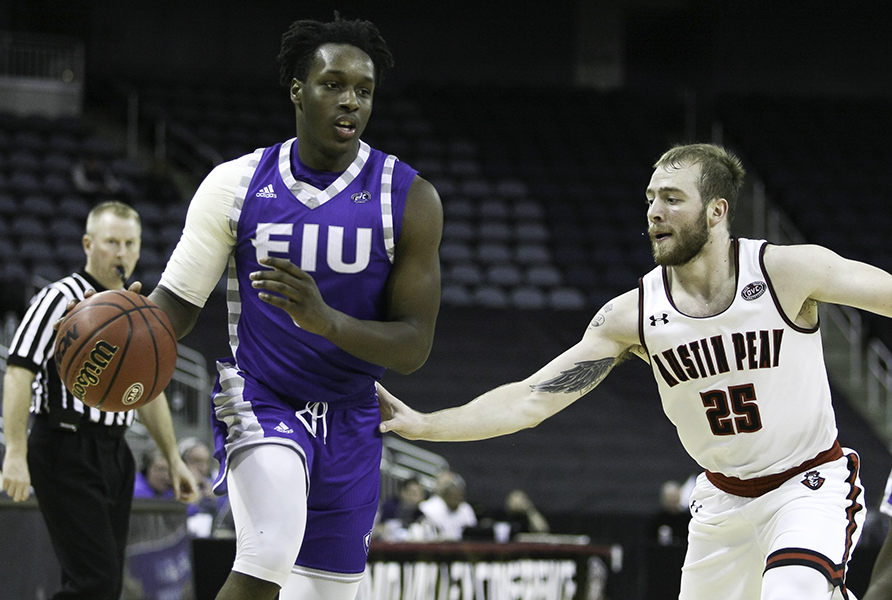 Freshman Mack Smith attempts to drive around Austin Peay’s Zach Glotta during the second half Thursday in Evansville. Glotta and the Governors knocked the Panthers out of the OVC tournament with a 73-66 win.

For just the second time in 24 years, the OVC hosted its annual men’s and women’s basketball tournament in a city other than Nashville, Tenn., but the new home of Evansville, Ind. brought in much more attendance.

The later rounds brought in more fans than early on as the men’s championship game between Belmont and Murray State had about 3,000 more people in attendance than last year, while the semifinal round had increased by about 1,000 people.

It did not come early on in the tournament, though, as the first few games had lower attendance at the Ford Center than the year before.

To compare, the first round of the men’s tournament last year brought in 1,043 fans in attendance, but this year that amount decreased by nearly 400 at the Ford Center.

The quarterfinal rounds were the low point of the tournament as just 900 people attended the game.

With an increase in fans offering some optimism for the conference, assistant commissioner for strategic communications Kyle Schwartz said one of the focal points of this move from Nashville to Evansville was to get more engagement from the local community.

That has been seen as unlike Nashville, Evansville posted two billboards and advertised the tournament through commercials as well, according to Schwartz.

He credited that to the bigger budget available in a smaller market.

“The local community has really embraced it, and certainly the civic leaders since we announced this a year ago have really gone out of their way to have a successful tournament,” Schwartz said.

Another notable part of the tournament being moved this year is that it offers a closer distance for some teams such as Eastern and Southern Illinois Edwardsville.

“It’s three and a half hours closer for us, so I like it,” Eastern coach Jay Spoonhour said. “It’s closer for almost everyone, and the arena is really nice.”

Many teams in the OVC are from Tennessee, so the site of Nashville always made sense, but that left other few teams making much farther travels.

This year, Evansville offered a more central location with the average time of travel being around 3.5 hours.

Jacksonville State still has it the toughest, though, with about a 5-and-half-hour trip.

“I think in the end it balances out,” Schwartz said. “It’s drivable for a lot of schools, and that’s important so fans can get to the game.”

When the tournament has been hosted in Nashville, the Municipal Arena has been where games are played, but Schwartz said they consider the Ford Center to be an upgrade.

“The state-of-the-art facility is a big reason why we came along with the fact that they just wanted us,” Schwartz said. “I’d be hard-pressed to find a venue of this size somewhere else in our geographic footprint that is as nice.”

While the number of fans in attendance may fluctuate, the point of emphasis for the OVC remains to be elsewhere.

“It feels like an NCAA tournament in this stadium, and that’s what we want to give our student athletes,” Schwartz said.

The move for the conference tournament to be in Evansville is only for this season, as Schwartz said the board and president will look at everything after and decide the next step.

He said the conference is not ruling out a return to Nashville and could end up returning back there one day.