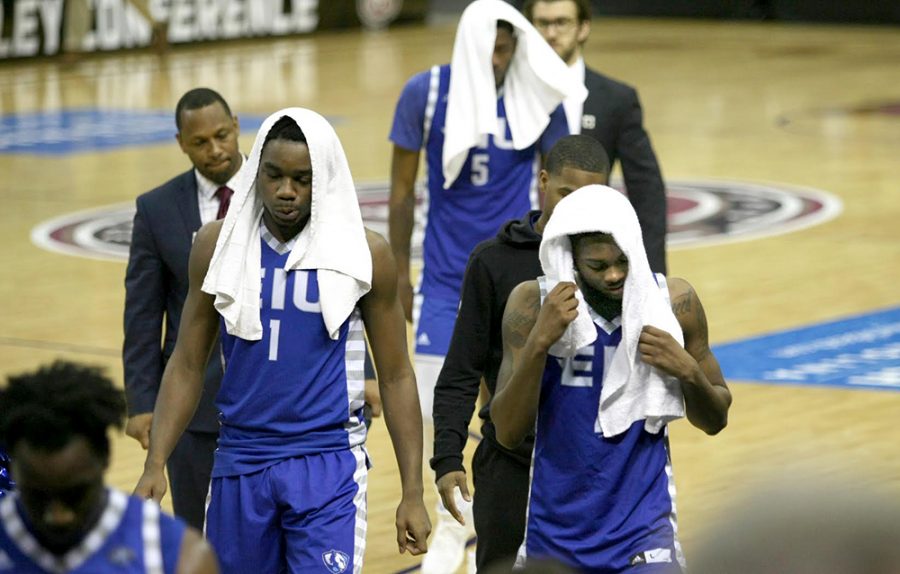 Eastern seniors Montell Goodwin, bottom right, and teammate Ray Crossland (5) exit the floor for the last time after a 73-66 loss to Austin Peay. The two seniors combined for 25 points, 7 rebounds and 3 steals in the 2nd round loss.

All good things come to an end, and for the Eastern men’s basketball team, it was a stellar first half that came to an end, 20 minutes before its season came to an end, at the hands of Austin Peay Thursday in the second round of the OVC Tournament.

The Governors used a 47-point second half to bust their way past the Panthers 73-66 to end Eastern’s OVC Tournament run in the second round.

Austin Peay coach Matt Figger said the Panthers took it to them in the first half and called it a tale of two halves. That goes for both schools.

Eastern needed a strong start to hang with Austin Peay, and it got that right away scoring 40 points in the first half taking a 14-point lead into halftime.

The first half was vintage Eastern men’s basketball. Senior Montell Goodwin and freshman Mack Smith got the ball and they scored. Senior Ray Crossland also added 10 points in the half.

But in the second half, Austin Peay locked down on Goodwin and Smith who combined for 24 points in the first half and forced them to just 11 in the second.

“They were denying and trapping more on ball screens,” Goodwin said. “They made it a little more difficult. Full court, they picked up all the way and made it tough on me.”

And that is one of the best, if not the best, way to beat the Panthers. Get Goodwin and Smith out of a groove and keep the ball out of their hands.
“Austin Peay kept the ball out of Silk’s (Goodwin) hands, which is a smart move,” coach Jay Spoonhour said.

“Montell hasn’t come out of a game since late November, basically. What he has had to go through, he has really been something. (Austin Peay) is a physical tough team that makes you work for everything.”

It became a broken record all season, and maybe at times it was beaten too hard on, but Goodwin was playing 40 minutes because Eastern did not have a true point guard. He did it all for the Panthers.

Just as the key for Eastern was to start the game strong, one stretch of weak play would make a difference against a team like Austin Peay, which was just as key. Especially when one player, Zach Glotta, scores 21 points just in the second half.

Eastern’s leading scorer Thursday was Smith. He scored 20 points, but was never able to play like the Smith everyone saw in the first half.

But, if it is any conciliation, it shows what Eastern has returning to next year’s team. Spoonhour spoke with high praise and Goodwin nodded in agreement that Smith did a lot for Eastern this year.

“The stuff he has done has really been impressive,” Spoonhour said. “He started getting really guarded (about halfway) through the league season, where people were like ‘we really have to guard this guy.’ (Thursday) he was really efficient offensively.”

Austin Peay forced Smith into turnovers he usually does not make, turning it over four times, which tied a season high.

“They’re a good defensive team and they have strong athletic, tough guys that like to guard,” Spoonhour said. “I think that made the difference.”

Check dailyeasternnews.com for another story to follow this one Friday morning.