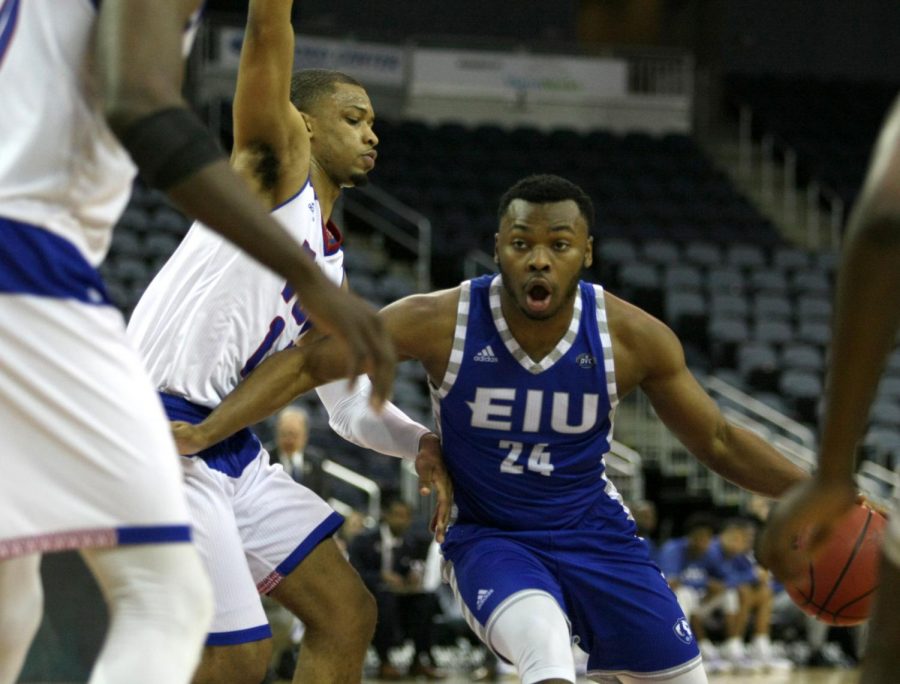 EVANSVILLE, IND.— Sometimes things go as planned, sometimes they do not. Eastern’s OVC Tournament opening win was proof of that.

Eastern escaped with a 73-71 win over Tennessee State to advance to the second round of the OVC Tournament Wednesday night at the Ford Center in Evansville, Ind.

Right out of the gates, the game was what coach Jay Spoonhour expected; a tough defensive game and low scoring. One thing remained true; it was going to be a tight game.

It took a while for the Panthers to get going in their OVC Tournament opening game, but Eastern found a groove in the second half. The Panthers and the Tigers both scored 49 points after scoring 24 and 22 in the first half, respectively.

Senior Montell Goodwin continued to play the way he has all season and scored 20 points to lead the Panthers.

Wednesday night’s game started just as the Panthers’ expected and Spoonhour joked, asking when all those points were scored in the second half.

“The first two times we played against them it was a dog fight,” Goodwin said. “It was a low scoring game and we just had to pull it out.”

All game long, especially in the first half, Tennessee State did not let Goodwin or freshman Mack Smith find open shots. Eastern did the best it could to get the ball to those two, but the shots they took were contested.

Goodwin and Smith scored nine points and four points in the first half, respectively, and Smith did not get one three-pointer to fall.

“We got more rhythm when they started trapping,” Goodwin said. “We were open more. We just slowed down and (became) patient. We let them come to us and foul us. We just went from there and attacked.”

Smith hit three three-pointers in the second half, including a bank three pointer to give Eastern a 68-62 lead with 1:04 left in the game. Tennessee State cut the score to three points the possession before.

“It’s crazy. How many has he banked in?” Spoonhour said. “It’s a back-breaker for them because they had a good defensive possession going and we were just standing, not sure what to do, trying to get to the end of it and those kind of plays are back-breakers.”

Tennessee State’s back did not break, as it was able to still get the game close and Spoonhour said, that is why the Panthers have to continue to play.

Spoonhour said coming into the game that games like this come down to one or two possessions and it did just that.

The two teams posted near identical stats and Tennessee State’s Delano Spencer’s attempt at a game-winning three-point shot at the buzzer almost was that final play.

Senior Devantae’ Price was key at the end of the game as he brought down seven rebounds.

“I like to rebound, so I try to get down there as much as possible,” Price said. “I have to box out. I know that the guy down there is bigger than me, but I just try to get the positioning I do and get the rebound.”

With Austin Peay Thursday night, another tough defensive game is expected and Price is ready to get in the paint and bring down more rebounds.

“I know they play really hard on defense and we have to play with poise,” Price said. “(We have to) come to the open spots and catch the ball.”