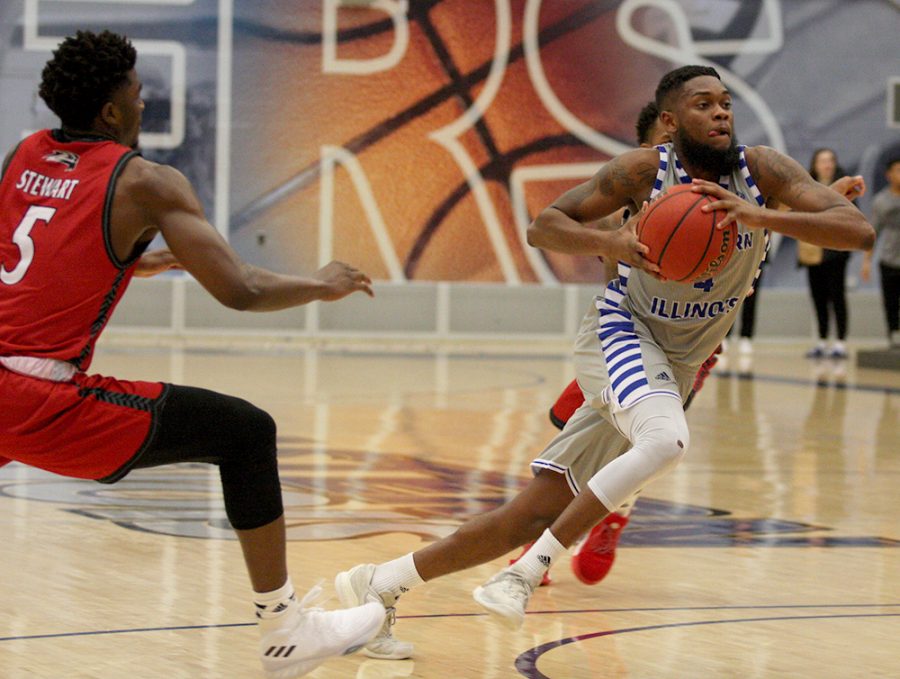 Senior Montell Goodwin steps past a Southern Illinois Edwarwdsville player in the Panthers’ 68-56 win in Lantz Arena on Saturday. Goodwin finished the game on 12 points.

One by one, each guy left the court and was met with hugs from teammates and coaches, while the fans in Lantz Arena were on their feet delivering booming cheers from the stands.

And nine seconds after that, the Eastern men’s basketball team won its final regular season home game 68-56 over Southern Illinois Edwardsville to secure the No. 7 seed for the OVC Tournament starting Wednesday.

The four seniors have only been at Eastern for two years, but quickly became the poster boys of Eastern basketball.

“It was fun knowing it was my last game playing here, especially with this group of guys,” Crossland said. “This is a great group of guys and we’re really close. I wouldn’t want to come out with any other guys and fight for a chance to go to the OVC Tournament.”

Crossland led the Panthers with 18 points, Goodwin and Dama followed that with 12 points each.

Goodwin said he and the rest of the seniors wanted to go out with a “bang,” and they sure did as they used a 14-0 run from the 7:46 mark to 1:01 to win the game. Southern Illinois Edwardsville took the lead 50-49 off a layup by Christian Ellis right before Eastern went on its run.

The Cougars were 0-9 from the field over that stretch.

This season did not go how anyone expected and Spoonhour called it unfair for the guys and what they have had to go through, especially the seniors, noting that there was hardly a game over the last two years where they looked back and said they did not “bring it.”

But the Panthers still managed to find a way to make it to the OVC Tournament after playing much of the season without their point guards and it showed the depth Eastern had on its bench.

“It’s always a legit team effort,” Crossland said. “I know we have a lot of good pieces around here and everyone knows their role and we try to focus on what we need to do.”

Two years ago, Crossland and Goodwin were on their visit to Eastern on the same day. Goodwin, being from Cleveland, had never heard of Eastern until it was time to find a school.

“It’s been a journey, because I never heard of this school before I came here,” Goodwin said. “It was pretty interesting when I saw Jay Spoonhour.”

Crossland and Goodwin knew each other before coming to Eastern.

When they were with fellow senior Terrell Lewis (Lewis took a redshirt this season) on their visit, the two decided they wanted to play with each other again.

They played in a Top 100 camp together, but Goodwin got traded away from Crossland’s team.

Spoonhour said he is happy with how the Panthers are playing right now heading into the OVC Tournament, and that it took them a long time to figure out how to adjust their offense.

But the injury bug still has not quite gone away as junior D’Angelo Jackson, who just returned from a nagging ankle injury last week, reinjured it and did not suit up on Saturday.

The regular season is over and Eastern has No. 6 Tennessee State in the first round tWednesday at 8:30 p.m. in Evansville, Ind.