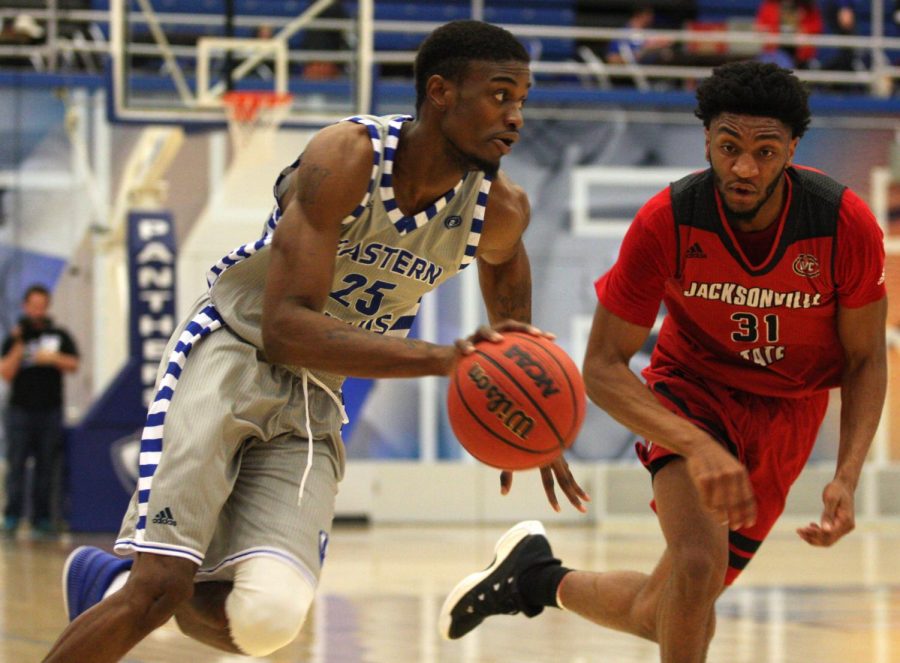 Eastern senior Muusa Dama drives the lane in a game against Jacksonville State on Feb.1. Eastern lost the game 75-56, Dama scored 11 points and grabbed six rebounds in the loss.

The Eastern men’s basketball team secured its trip to the Ohio Valley Conference tournament with a win over Tennessee-Martin Saturday, but there is still plenty of action left ahead of the postseason.

The Panthers have their bid in hand, yet their opponent for the first round is still to be determined and this final week of games will shape that out.

Eastern holds the seventh spot in the standings right now, and if things continue this way, that is where the team will stay for the tournament with a first-round matchup against Tennessee Tech.

But two last home games against conference-elite Murray State followed by a game against the team trying to take the Panthers’ seventh spot, Southern Illinois Edwardsville.

As Eastern tries to close out its seeding for the postseason, other teams are trying to do the same.

The top two regular season finishers earn that coveted double-bye, which sends them straight to the semi-finals.

Right now, Murray State and Belmont would earn that, as both teams hold a 14-2 conference record.

The Racers get an easier matchup by facing Eastern on Thursday, despite it being on the road, then follow that with another road game at Austin Peay (11-5).

Belmont also hits the road Thursday but has to do so against another team with plenty to play for, Jacksonville State, who at 9-7 sits one game back of the fourth seed in the OVC tournament.

The Bruins then get another physical matchup, facing 10-6 Tennessee State at home in the regular season-finale.

So, the intriguing aspect is all on the table as the two best teams to this point in the OVC will test the teams right behind them in the standings.

Austin Peay has been impressive to this point and if either Murray State or Belmont falter in this final week, the Governors are in the best position to capitalize and earn that double-bye.

If they are going to do that, the Governors must capitalize on their game against Southern Illinois Edwardsville Thursday, even if it is on the road.

That final game of the regular season at home against Murray State could go a long way in deciding who comes out on top in the postseason tournament as that double-bye is proven to be helpful.

While those conference leaders battle it out at the top of the standings, this conference has shown in recent years with winners like Austin Peay and Jacksonville State, that the lower seeded teams can make a difference too.

Tennessee Tech is a wildcard in the OVC, quietly pushing to a 9-7 record with two games left, which as of right now, is good for the sixth spot in the tournament.

The Golden Eagles have a solid chance to improve that seeding though as their final two games come against the two teams above them, Tennessee State and Jacksonville State.

The Gamecocks are dealt the toughest task of facing Belmont Thursday, and Tennessee Tech has the upper hand in the regular season finale between the two as the Golden Eagles host Jacksonville State in that pivotal game.

The OVC has carried plenty of intrigue all season long and now with one week to go, every win counts as teams push for the highest seed possible.