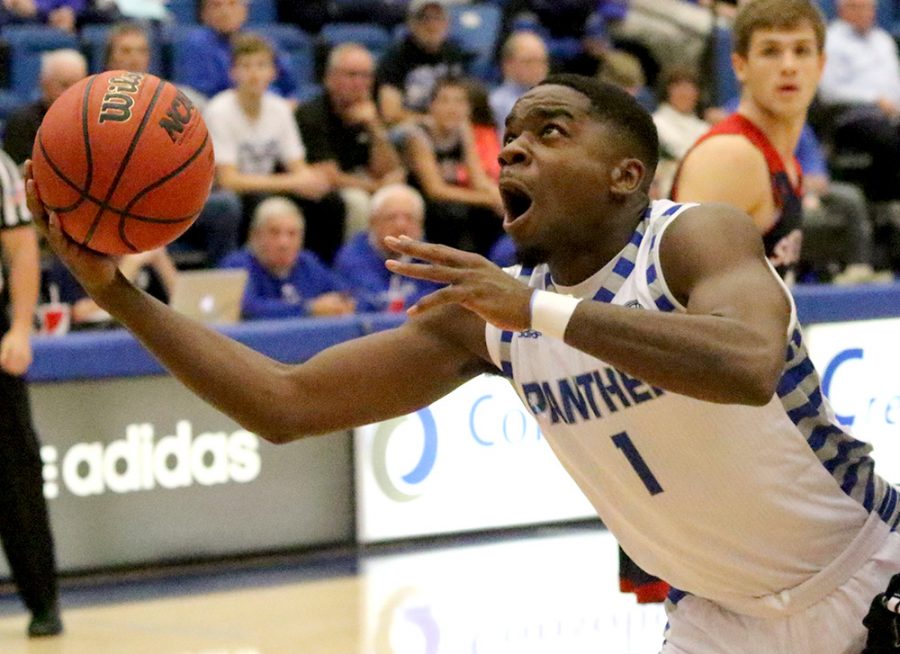 Junior D’Angelo Jackson tosses up a layup in Eastern’s exhibition loss to Southern Indiana Nov. 6. Jackson has been out since Dec. 30 and is hoping that he is able to play Thursday at Southeast Missouri.

The injury madness got so bad for the Eastern men’s basketball team, it forced coach Jay Spoonhour to shave his “cursed” beard clean off after the Panthers lost their fourth guard.

Junior guard D’Angelo Jackson is the only one who has a shot at returning this season, and it may be as soon as Thursday when the Panthers play Southeast Missouri on the road.

Spoonhour said they have to wait until Thursday to decide if Jackson can get back into the lineup.

“I feel confident, I’ve been working, going through rehab and treatment, so I feel (about) 100 percent with it and feel it is going to be a good ride with the team,” Jackson said.

Jackson has been out since Dec. 30 with an ankle injury.

He has been practicing with the team, and Spoonhour said Jackson is “chomping at the bit” to get back in. But, Eastern needs to make sure he is ready, because playing in a game and practicing are two different worlds.

“He’s been out for a month and a half,” Spoonhour said. “You don’t just show up (and start producing). I know he wants to do that, but the game doesn’t play that way.”

Jackson had 28 assists in 12 games played, including one in the two minutes of the Austin Peay game when he got hurt.

Eastern’s roller coaster-cursed season has been tough for Jackson, who is in his first year at Eastern, as he has had to watch from the bench for the last 12 games.

“It was not a good feeling,” Jackson said. “We’ve had an up and down year, and we’ve had the injuries at the guard, and it was terrible for our team, but we’re fighting through it.”

With the return of Jackson potentially right around the corner, Eastern may be without junior Aboubacar Diallo, who hurt his big toe in practice the other day.

Spoonhour said they will have to also wait until Thursday to decide if Diallo will be ready to go.

“We tried to guard them and we couldn’t and they’re a good offensive team,” Spoonhour said. “Numbers-wise they shoot it as good as Belmont and numbers don’t lie. We have to do a better job defending them and just saying that you’re going to is easy to do, but it is hard to defend these guys.”

Eastern is one of three teams fighting for two spots to get into the OVC Tournament Feb. 28. Eastern has one of those two spots right now, but Southern Illinois–Edwardsville and Tennessee-Martin, two teams Eastern plays in next two weeks, are waiting for any chance to jump ahead of the Panthers.

Spoonhour said the motivation for the Panthers is to just play well and not to get caught up on holding ground in the standings.

“(The close standings) is motivation for the other two teams for sure, because they know they can come in here and if they can knock us off, they get themselves in (the tournament).”

Eastern and Southeast Missouri tip off at 6:30 p.m. Thursday in Cape Girardeau, Mo.