Rauner said in his budget address that the pension revamp will cut $1 billion in taxes, claiming that the legislature can no longer increase the income tax and instead, a heavy pension reform is needed.

If passed, this plan will be phased in over the course of four years and those at the “employer level” will pay the pensions in 25 percent increments per year, Rauner said.

The proposal also offered local governments and schools the tools they need to “offset the costs” acquired from paying the pensions.

These tools include an increase in education funding, the power to dissolve or consolidate units of local government and more flexibility in contracting, bidding and sharing services.

Universities will therefore have to pay their pension costs and pick up healthcare costs.

However, Rauner proposed an additional $205 million in appropriations to universities for FY19 to offset that cost.

Charlie Wheeler, the director of the public affairs reporting program at the University of Illinois – Springfield, said the difficulty is figuring how the universities will be able to afford picking up the pension costs, which he said is not possible.

Such a shift would result in potential fee increases, tuition increases or cuts, depending on each university and the actual numbers resulting from the pension costs, Wheeler said.

Richard Wandling, the chair of the political science department, said this pension sharing idea is something that downstate schools and public universities will not be happy about.

If Eastern is given the flat budget it has relative to FY18, there would be a budget reduction if the university has to take up the responsibility for funding pensions, he said.

Wandling said Rauner’s budget seems to be based on the idea that school districts and universities are draining the state budget.

“It’s as though (local governments, school districts and public universities) are separate from the responsibilities of the state and when it comes to the promotion of education (on all levels),” Wandling said. 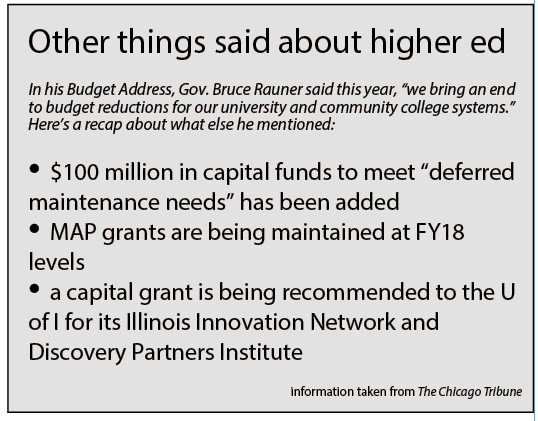 He said it is as though public universities and school districts are imposing these costs on the state when in reality they are part of an “overall matrix” to deliver education as a public good to residents.

“We have a comprehensive education system in which we have other institutions in the state that play an important role… and it’s important that they be self-sustaining entities because they contribute great things to the collective benefit of the state,” Wandling said.

He said Rauner values higher education in a very narrow sense of how it contributes to his vision of economic development.

“For example, in higher education we are state employees we are not an independent entity here, but Gov. Rauner is obviously trying to extract whatever resources he can because fundamentally he does not value public education and certainly public higher education,” Wandling said.

Wheeler said it was dishonest to promise universities an increase in appropriations while expecting them to make up for the dollars they will not receive in the pension fund.

“I think the governor is full of baloney when he proposes that this is a way to save $1 billion,” Wheeler said.

State rep. Reggie Phillips (R-Charleston) said the idea of the governor’s proposal is to ensure public universities and other public entities are responsible with spending and will be able to start saving.

Phillips agrees with the governor’s idea, but said a democrat-dominated legislature will not pass it.

However, Phillips does not know if the $205 million would cover the pension and health costs that are currently at the higher education level.

“I don’t have a problem with making the universities responsible for their own payments, as long as we have a way of funding them,” Phillips said.

Phillips said another budget impasse is not likely, but the pension reform plan will be met with heavy debate and will not be agreed on by the General Assembly.

“The question is will the democratic controlled legislature see (the pension plan) as a good idea and the answer to that is no,” Phillips said.

Wandling said difficult times are ahead, though that does not necessarily mean there will be another impasse.

“All I can say is in listening to a public radio interview with (John Cullerton, the president of the senate), you have senator Cullerton using terms such as deceptive, and using a term such as deceptive in referring to the governor’s budget address and proposed budget; that’s not exactly a promising sign of good times ahead,” Wandling said.