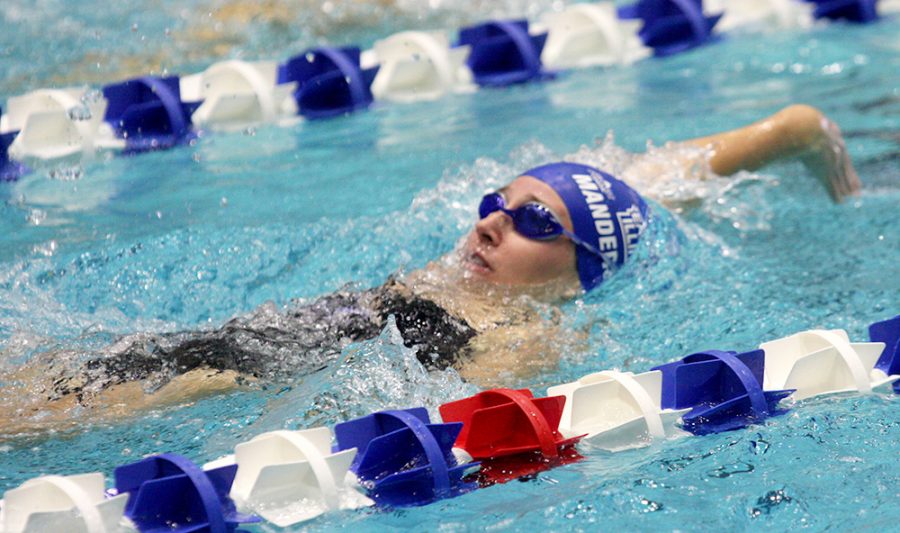 The Eastern men’s and women’s swim team’s effort and hard work will be put to the test as they travel to Sioux Falls, S.D. for the Summit League Championship.

As the Panthers leave Monday, they embark on a 688-mile road trip to compete in the four-day championship from Wednesday to Saturday.

At the championship, there will be six other schools going up against Eastern.

Because of the long drive, the Panthers have plenty of down time on the road-trip. While on the bus, the Panther swimmers are not only focused on the meet, but must work on their school assignments as they miss a week of classes.

“As of now, it’s more just annoying that we have to be on a bus for this long,” said junior Nick Harkins. “We’re all doing homework or something productive because we have plenty of time to work on it.”

Since the Panthers are focused on their school work, the competitive nature has yet to set in. Harkins said he imagines Tuesday will be more focused on competing since that is when they arrive in Sioux Falls.

Long road trips for certain schools, like Eastern, can take a toll on a team. However, for the Panthers, the team is confident that the road trip will not impact them during the championship.

“Traveling on a bus for two days is rough,” said junior Caro Lamarque. “But we all have big expectations for the meet and won’t let the long drive affect us.”

When the Panthers arrive Tuesday, the swimmers will check in and head to the Midco Aquatic Center to check out the pool. This is also the first time any of the Panthers will see the pool as well, creating a different atmosphere than what they are used to for conference, said junior Alex Laleian.

Laleian is nervous for the new atmosphere, because he has been swimming at IUPUI for meets since he was ten. With the Panthers swimming in an unfamiliar pool, they feel the need to go and test out the waters before conference begins Wednesday.

“We’re going to swim at the pool Tuesday night to familiarize ourselves with everything,” Harkins said. “It will be a good time to work on starts, turns and relay exchanges.”

Despite wanting to win every individual meet, this championship is the one all the swimmers focus on and care about. All the other meets prepare us for this one, Harkins said.

For individual meets, Harkins is most confident in the 100-free because that’s the event he is ranked highest in.

On Wednesday, there are no preliminaries, since the only events are the 200-medley relay and the 800-free relay. For the Panthers, having only swimming relays in their first day could be beneficial.

“Only having relays the first day is nice because it lets us get used to the pool before we start our individual events,” Lamarque said.

Going into the relay events, the Panthers are coming off breaking the pool record for the women’s 800-relay, giving them confidence boosts.

Not being tapered and still putting up good times makes it exciting to see what the team can do at conference, Lamarque said.

Comparing last year’s team to this year’s, there are differences that the swimmers feel could play in their advantage during conference. Most noticeably, the women’s swim team is going into the conference with a winning record.

“We’ve overall had a pretty good season, so I think that has given us some confidence and a better mentality going into this conference compared to previous years,” Lamarque said.

Also, for the women’s team, they have a unique roster that has more underclassmen than upperclassmen. With this type of roster, there is a different energy to the team that creates an uplifting and encouraging atmosphere.

Those underclassmen, such as sophomores Gloria Gonzales and Karleen Gernady and freshmen Sarah Lohman and Lindsey Wood, have been handling the pressure of their first conference well, helping the team have a positive mentality.

Throughout the season, the women’s team has been working on keeping a positive mentality, which has played into their success. Their positivity is shown through on-deck atmosphere.

“During season, we have done a really good job of having a strong energy on deck while cheering everyone on,” Lamarque said. “And I think that has helped us be successful. When everyone is having fun and cheering each other on, we always swim our best.”