Panthers hanging on in playoff race 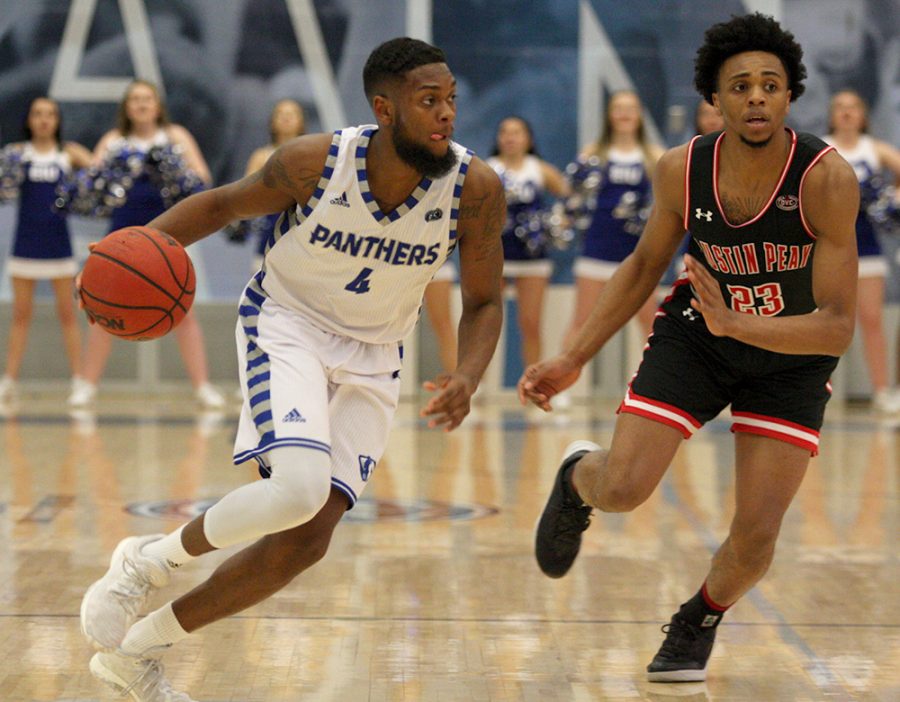 Senior Montell Goodwin dribbles past Austin Peay’s Steve Harris in the Panthers’ 76-69 loss Saturday in Lantz Arena. Eastern is seventh in the OVC.

Not many people would expect the Eastern men’s basketball team to still be in contention for an OVC tournament berth with four guards all out due to injury.

But, that is just it. The Panthers have a shot at cracking the top eight and heading to Evansville, Ind. for a shot at the conference title.

It has not been pretty to this point, but luckily for Eastern, it does not have to be.

Eastern is fresh off a loss to Austin Peay, but still standing in the seventh spot of the playoff picture with a 5-9 conference record.

It is also important to mention that right now, Eastern sits eighth in the standings and Southeast Missouri is seventh, but because of an NCAA infraction the Redhawks are ineligible for OVC or NCAA tournaments in 2017-18.

Credit the Panthers a shot to hold their ground as the seventh seed in the OVC tournament, but of course this final stretch of games can change that completely.

The rest of the OVC? Well, it is a tale of two sides.

The upper half of the conference is clear, and the elites have proved themselves as teams like Murray State and Belmont have wavered well with identical 12-2 OVC records.

And to be fair, that team Eastern just lost to is also pretty good, considering Austin Peay is having one of its best seasons of the decade, notching a 10-4 record to this point.

While those three teams appear to be the favorites heading into the final push for the playoffs, this conference has proved in recent years that it means nothing.

Just ask Belmont, who seemingly always ends up as a top seed, though Jacksonville State and Austin Peay have crashed the party in the last two years to earn an NCAA tournament bid.

The OVC has a widespread of talent, and this year is a case more than ever for that, especially when looking at the meat of the standings.

Jacksonville State and Tennessee State are lingering around the top with 9-5 records, but for the Gamecocks, this may serve as the biggest week of the season.

Jacksonville State has a shot to improve its seed immensely with its next two games against Murray State and Austin Peay.

The toughest part? The Gamecocks will have to play both on the road.

Tennessee State has a much easier road to earning a higher seed, considering its next two games are at home against the two last place teams of the OVC — Eastern Kentucky and Morehead State.

At the bottom of the conference, it is a party to see who can sneak into the tournament.

That will all play itself out as all the teams down there are about to play each other, such as the next few opponents for Eastern.

The Panthers are in good shape to earn a berth to the conference tourney, but the two teams that could crash their party happen to be two of their final four games.

Tennessee-Martin and Southern Illinois-Edwardsville both share a 3-10 conference record, and those two games appear to be must-win for Eastern, considering the Panthers also have to face Southeast Missouri and first-place Murray State in this final stretch.

The OVC tournament has offered plenty of surprises in recent years, so whether it is the for first or eighth seed, it is clear this final stretch of the regular season has meaning.