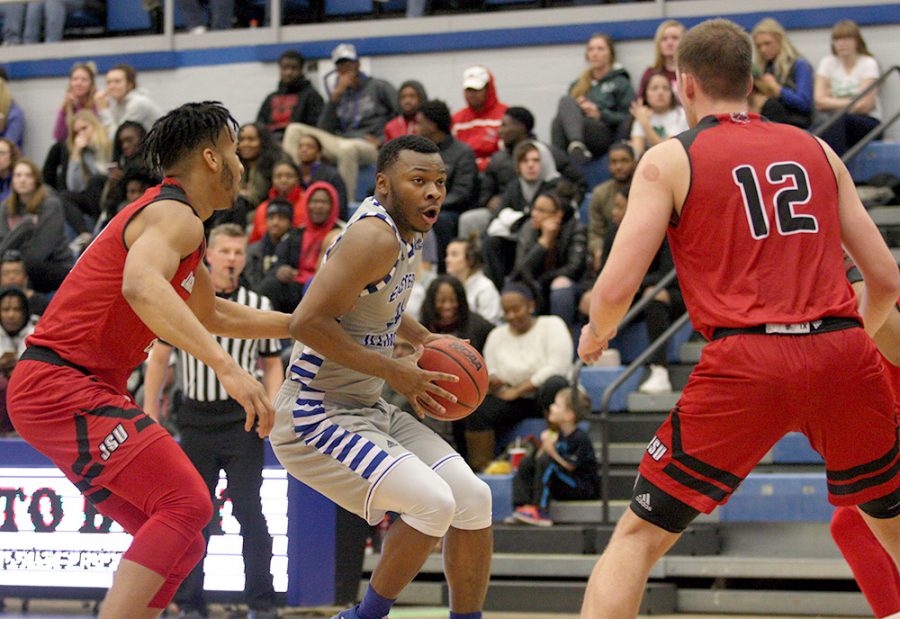 Junior Jajuan Starks jumps into the lane before going up for a layup in Eastern’s 75-56 loss to Jacksonville State in Lantz Arena. Eastern won 78-74 over Southern Illinois Edwardsville Thursday on the road.

The Eastern men’s basketball team is starting to adjust its play to overcome difficult obstacles, and that was enough for a 78-74 road win against Southern Illinois Edwardsville Thursday night.

The Panthers continue to hang onto being tied for that eighth and final spot of the Ohio Valley Conference tournament bubble, despite being down four gaurds.

Well, against the Cougars it was some familiar faces stepping up when it mattered most.

Freshman Mack Smith is proving his game is no fluke, notching 12 points as one of four Eastern players in double-digit scoring.

It was not his most efficient night as he shot just four-of-11 from the field, but in times like that, there are those veteran upperclassmen to pick him up.

Montell Goodwin continues to handle the ball on most possessions and follows it up with 21 points and seven rebounds.

This game offered up exactly what the Panthers needed, especially after a close home win against Tennessee Tech last game.

All year long Eastern has been searching for that complete game, and in some instances it has come, but there is not much of a better time to see Muusa Dama notch 17 points, a big part of the Panthers 28 down low this game.

But what also stands out is that the Panthers are no longer falling back on their defense in hopes of winning games.

Eastern has found its touch offensively, as shown in its 57 percent rate from the field.

Ray Crossland may be the biggest wild card of this Panther team though.

He has been able to provide a special spark for Eastern without always getting the credit for it, and that essentially speaks to his style of play.

Crossland finished with 17 points and seven rebounds against SIUe, and he can really do it from anywhere on the court.

In this one, he finished 2-4 from three-point land and an efficient 6-of-10 from the field overall.

Efficiency was lost in the final moments of the game for Eastern though as their lead diminished because of a three-minute scoring drought to end the game.

It was also a factor of Southern Illinois hitting all three of its final shots to end the game, but in the end the Panthers’ defense did just enough.

Eastern’s defense has proven it can compete in this conference, but it was just waiting for that offense to step up in the absence of those injured starters.

That time has arrived and the Panthers holding the Cougars to 29 percent from deep allowed enough room for Eastern to falter in those final moments.

The Panthers will try for more of that in search of their third straight win, and that begins with a home affair against Austin Peay.

The Governors are fresh off a tough 84-63 loss to Murray State Thursday night, but have still played an impressive conference slate with a 9-4 record.

It will serve as one of Eastern’s toughest games in this final stretch, but a much-needed win if the Panthers are going to hang into that playoff race.