A season without Lennox: Panthers push through season after losing its leader to injury 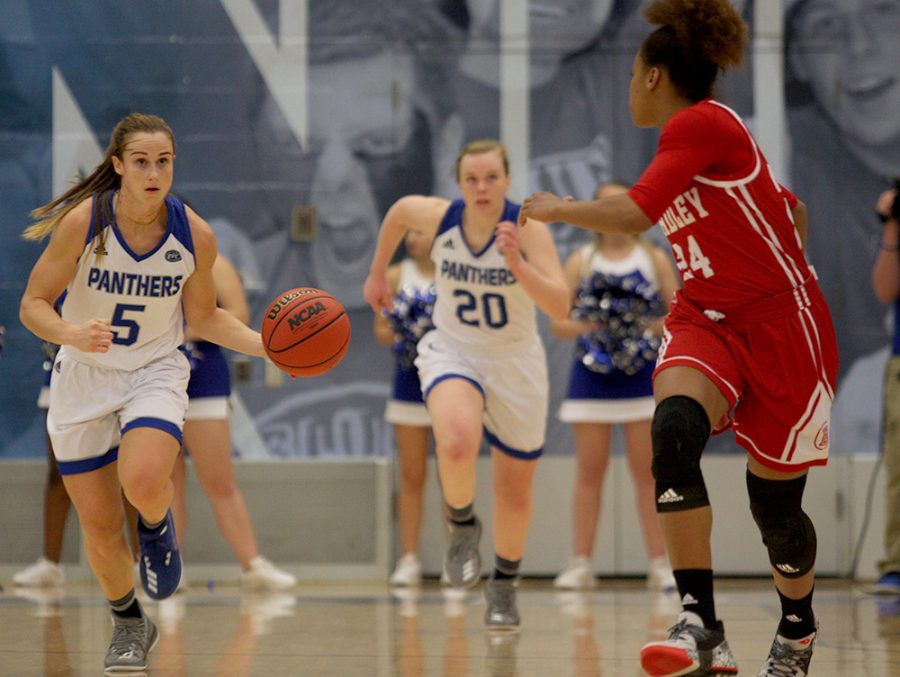 The definition of an Ironhorse and gym rat, Eastern’s seemingly invincible point guard was averaging nearly 40 minutes a game for the Eastern women’s basketball team, and was the prototypical protagonist that every good game story needs to be a great one.

But in December, just eight games into the new season, she was injured. Suffering a knee injury that required surgery, knocking her out for the entire season, while leaving Eastern without its most productive scorer and loudest voice on the court. It was a sudden turn of events that would leave even the biggest of optimists at a loss of positive words.

Lennox first noticed her knee bothering her in mid-December, a feeling she described as being a “bit sore.”

What Lennox had was a high meniscal tear in her knee. She found out soon after that the injury would require her to have season-ending surgery.

She had been there before, in 2011 she had surgery on the same knee, by the same doctor. This time however the success of the surgery could have had an impact as her future as a pro player, but despite that, she approached it with a positive attitude.

“If I could get my knee taken care of at this point I was hoping to be able to get a redshirt, so I would get another year of basketball back and then have my knee cleaned out,” she said.

Because she played in less than 30 percent of the team’s games before her injury, she was given the opportunity to redshirt this season and come back next year, an option she took willingly.

The Tasmania native was averaging a team-high 15.4 points per game at the time of her injury and despite playing in just one-third of the games this year, she is still third on the team with 39 assists this season.

She produced the exact type of numbers a team could want from a point guard and was regarded by multiple coaches in the conference as being either the best or second-best point guard in the OVC in the preseason.

Lennox plays with a reckless abandon that should be both feared and admired by her peers. The one thing about Lennox’s game that is evident from the second she steps on the court is how she always seems to have the accelerator pressed against the floor for the entirety of games without ever seeing the tank reach empty.

What drives Lennox is her love for the game, something she says she has loved for a long time.

But she also draws her motivation from a desire to be the best basketball player she can be.

Everything that happened on the court ran through Lennox, which meant when she went down, a lot of things had to change for the Panthers, coach Matt Bollant said.

“She just created so much and we were just a way better basketball team with her,” Bollant said. “But we can’t control that. So, let’s control what we can control and help the other kids step up.”

Her injury left the Panthers, who were 1-7 at the time, with a harsh reality to face. Their longest tenured player was out and the options to replace her were two relatively unproven freshmen guards. It was a situation that no team wants to find itself in, but nonetheless one that Eastern found itself in.

The players that replaced Lennox; however, a combination of freshmen Karle Pace and Taylor Steele, along with sophomore Danielle Berry have played far better than expected in Lennox’s absence.

Pace has scored 31-points in a game this season, a team-high, Steele has been the leading scorer all-around since taking over for Lennox and Berry has stepped up and performed well in a leadership role that was not expected of her at the beginning of the year.

While the three young guards performed well on the court, their former teammate “point guard” Grace Lennox quickly and without hesitation earned her off the court nickname among the players “coach” Grace Lennox.

Lennox says she has always been major voice for the team, so nothing has changed in that sense for her, other than the fact that she says she has to communicate more on the court and be the “eyes” for the things coaches and players do not see on the court.

Bollant said he will look to “coach Grace” for thoughts and adjustments and will even have her rate the team’s effort on a scale of 1-10, saying that for the players to hear they need in increase in effort from a peer rather than a coach carries a lot of power.

Bollant said in his 20 years as a coach, Lennox is about as “neat” of a kid he has ever had on his team.

“I tell her a lot that I am just so glad she is coming back and just the opportunity for me to be around her another year is exciting; she is an inspiration to be around,” Bollant said.