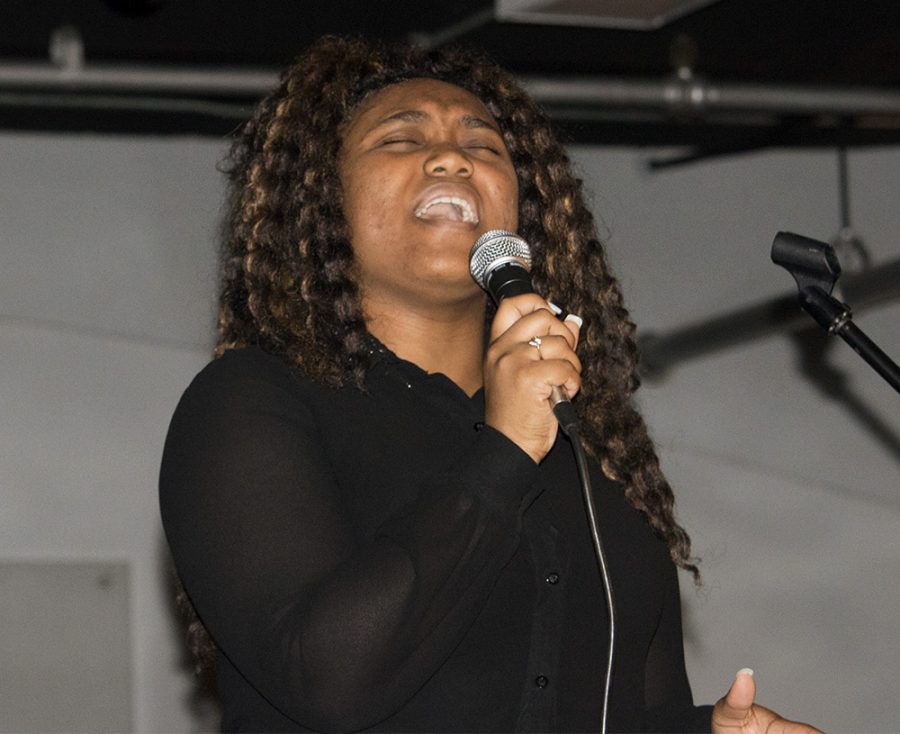 The lights were dim in the 7th Street Underground, but students’ voices shone as they performed poetry and sang songs at the “My Black is … Empowering” poetry slam.

“We live in a world where they try to disgrace us instead of embrace us, filled with crooked cops killing unarmed blacks. You are smart, kind and important, and only your fellow brothers and sisters know that you’re worth it, ” said Jade Lewis, a senior sociology major, as she recited her poem “Dear Black Girl.” Lewis composed the piece by herself over the course of one weekend.

Lewis said she was inclined to write her piece to encourage the African-American community to embrace their roots and provide guests with some encouraging words.

Alexis Scott, a student at the Lakeview College Of Nursing, continued to question racial injustice in the U.S. with her poem, “Being Black.”

“How come when I say ‘Black Lives Matter’ I’m a race baiter? How come everything black is related to death,” Scott asked.

“It doesn’t transmit with me as a person, but it’s an important part of my past,” Dade said as she began her performance. “I was in love once. We loved each other so much that we had plans to get married —but then they killed him.”

Dade said she picked a monologue to perform because Monday marked the anniversary of her theater teacher’s death.

“We are a very influential part of U.S. history, and we continue to strive for excellence,” Dade said regarding African-American Heritage Month.

One performer, Brendan Stewart, performed his rendition of “Ol’ Man River” during the open mic portion of the night.

“Not many people appreciate old songs like this, and we wanted to keep it alive,” Stewart said. “Ol’ Man River” is about the struggles of African-Americans working on a boat along the Mississippi River.

Later in the night, guests gathered on the stage to guess numerous songs by prominent black artists such as Nas and J. Cole, who were displayed on the TV screen.

Sierra Snell, a senior psychology major who helped to coordinate the poetry slam and serves as the parliamentarian for Eastern’s chapter of the NAACP, said it is important to take the time to recognize all minorities.

“You don’t usually hear about all of the positive things that we’ve contributed to society,” Snell said. “There’s more to us than our past.”

Carl Winton, a senior health studies major who serves as the president of the NAACP, also helped to coordinate the open mic night.

Winton said the poetry slam started being put together at the beginning of the semester and that anyone was free to sign up and perform.

“It’s important to be aware of the history and not to lose sight. This event gave the people in the arts the chance to support black history,” Winton said.