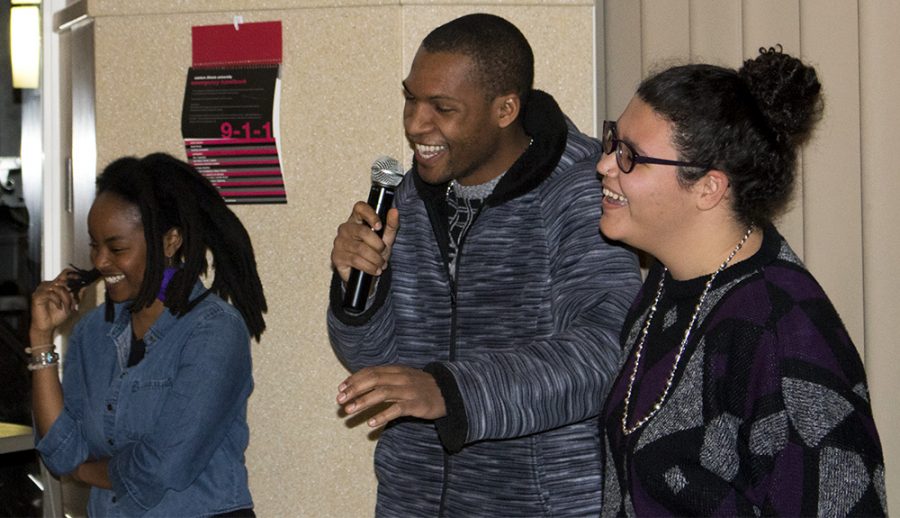 Alleluia Musabyimana, a senior sociology major, Marciall Anthony, an Eastern visitor and Maya Lee, a junior psychology major, laugh with each other at ‘Take A Knee’ Thursday night in the University Ballroom of the Martin Luther King Jr. University Union.

Police brutality and the Black Lives Matter movement were two topics explored at the “Take-A-Knee” movement, a discussion hosted by the University Board.

Del Marion, a representative of the Inclusive Cultural University and the keynote speaker of the discussion, said a lot of the criticism of the Take-A-Knee movement stems from coaches and figureheads in the sports business.

“The problem is that these coaches and other people do not want their players to kneel during the national anthem, because it will anger some people,” Marion said. “When that happens, these coaches believe that they won’t sell a lot of tickets at games.”

Marion also discussed how the Black Lives Matter Movement is affecting the country. Tony Talley, public relations coordinator for the University Board said it has a big impact.

“I think that it is a peaceful protest, which brings interest in the movement to more people,” Talley said. “It still is very unfortunate that a small percentage of people in the country still have not been affected by the movement and sadly don’t have a desire to learn more.”

“When I heard about this incident, I immediately called the staff at the school and they allowed me to intervene and be a part of a community discussion that addressed why this incident took place,” Marion said. “This was really when I realized that something needs to be done to promote change in our country.”

Marion also said an audit was done at the school, which led people to realize that an enormous amount of African-Americans were being suspended for things that white students were getting away with.

Audience members were asked to rate their stance on different issues based on percentages of intervals of 10.

Alleluia Musabyimana, a senior sociology major, said she believes that under 50 percent of the country believes in unity of all races.

“I feel that the political climate in the country as a whole has been very divisive,” Musabyimana said. “Our president is provoking this divisiveness and the rhetoric is being very affected by his actions, causing the country to not be as united as it should be.”

Hawah Abdulrasaq Coker, an immigrant and Muslim, has had her own experiences being judged by her race.

“Back home, we do not feel that people are racist,” Abdulrasaq Coker, a junior biological sciences major, said. “My first week at Eastern, an African-American girl came up to me and asked if my forefathers sold my ancestors into slavery.”

Abdulrasaq Coker said she felt very attacked by this comment because of the fact that her own ancestors were slaves.

“There is a lot of work, but there is still a lot of hate and resistance,” Abdulrasaq Coker said. “We really need to unite and work together to end all this hatred and racism.”