Gamecocks’ defense too much for Panthers to handle 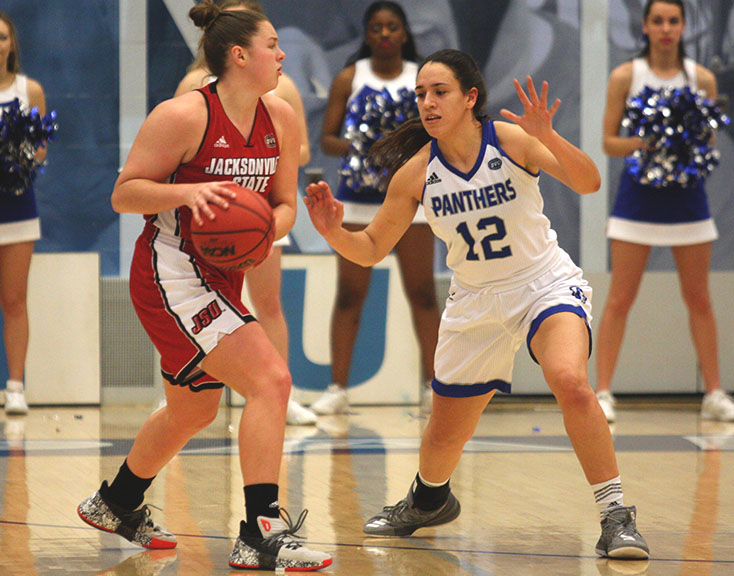 Eastern junior Carmen Tellez guards a Jacksonville State player Thursday at Lantz Arena in the Panthers 59-50 loss to the Gamecocks. Tellez had eight points in the game.

It has been a quarter by quarter season for the Eastern women’s basketball team this year, and the team’s 59-50 loss to Jacksonville State Thursday was no different.

This time however, it was not Eastern’s own faults that led to its quarter by quarter Jekyll and Hyde transformation, it was instead Jacksonville State’s No. 1 defense that caused issues for the Panthers and would ultimately be the reason the Gamecocks beat Eastern, according to head coach Matt Bollant.

“There has been quarters where it has been all us, where it hasn’t really been them at all, tonight I thought it was probably a little more them,” Bollant said. “Where they are at, 8-3 in the conference, is because they are the best defensive team in our league.”

Jacksonville State’s Rayven Pearson led all scorers in the game with 13 points and freshmen Karle Pace has an Eastern-high 12 points.

Eastern trailed by as much as 14 in the first quarter, led by three at halftime, were shut down by the Gamecocks defense in the third, and did too little too late in the fourth quarter, in a game where once again, every quarter produced a different Panthers team on the court.

In the first quarter of the game it looked as if Eastern had no answers for Jacksonville State’s top ranked defense, the Gamecocks held them to just 3-of-13 shooting and opened the game on a 16-2 run.

But, come the start of the second quarter, something clicked and it was the Gamecocks that seemed to have no answers.

However, everything came to a halt for the Panthers in the third quarter.

The Panthers shot just 3-of-13 in the third quarter and were held to just seven points and while Jacksonville State was an even worse 3-of-15 from the field in the quarter, all of its baskets were three-pointers and took back the lead, never giving back up for the duration of the game.

“Jacksonville State stepped up and played better in the second-half. They were better defensively,” Bollant said. “We had a great second quarter offensively and we just didn’t have a very good second half.”

It is no surprise that a team with a defense as good as the Gamecocks felt confident enough to play one-on-one defense and that is exactly what they did in the second half to throw off the Panthers rhythm according to Bollant.

“They felt like they could guard us one-on-one and they didn’t help and they pressured the ball and we needed to be able to get by and go make some plays,” Bollant said. “But give them credit, their defense was really good and I thought we fought and battled, we just didn’t make enough plays offensively, especially in the third quarter.”

The loss drops Eastern to 1-10 in the OVC and Jacksonville State continues its historic start and improves to 8-3.

The loss for Eastern Thursday did not upset Bollant as much as recent losses in games against Belmont and Tennessee State, because he felt his team played hard despite the outcome.

Eastern will play at Lantz Arena against Tennessee Tech Saturday at 1 p.m.

JJ Bullock can be reached at