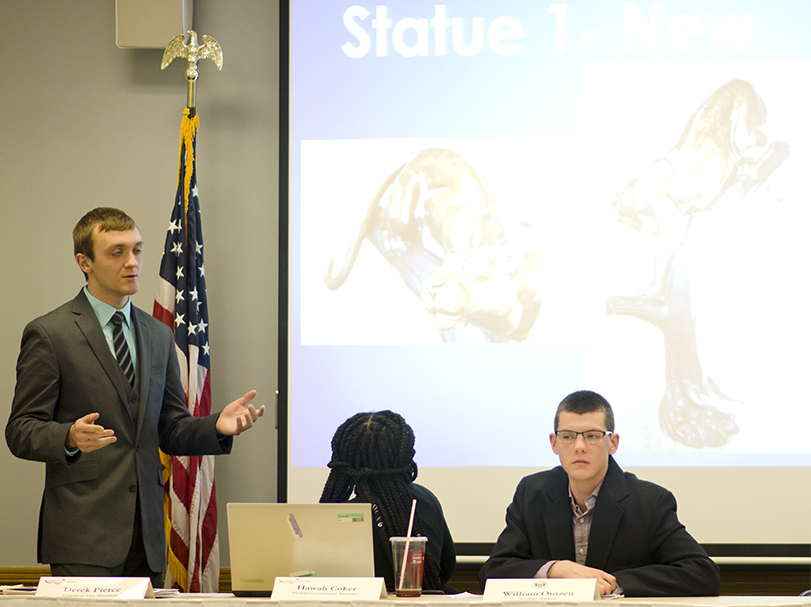 Executive Vice President Derek Pierce presented an example of a panther statue the group hopes to place in front of Booth Library. Pierce presented different possible statues. He said he hopes the addition of the new statue will not only provide a great place for future panthers to capture their visits to Eastern, but also become a place for alums to return to.

The Student Senate discussed the potential purchase of a $5,950 bronze statue of a panther during its meeting Wednesday night.

Executive Vice President Derek Pierce said the statue will be paid for by the student government budget, which is paid for by student fees.

“$2,400 of it comes from (Will Outzen’s, the student speaker of the senate) scholarship because he’s in ROTC and he has maxed out his financial aid so he takes a smaller percentage than what he’s allocated, so we have the funds there,” Pierce said.  “Also, we have a lot of excess in our non-employee travel and other contractual expenses currently in the budget…overall also last semester the committees didn’t spend all their budgets that kind of carried over in the cost as well.”

Pierce said they will also return to the Apportionment Board to ask for an additional allocation to pay for a base, pad and commerative plaque for the statue if the proposal is approved by the senate.

Pierce said the Student Senate has not asked for funds from the university aside from what was already offered in the student government’s budget.

Wednesday was the first time the Student Senate officially heard about the proposal.

“In the fall, we didn’t know if it was quite feasible yet, so we didn’t want to get anybody’s hopes up,” Pierce said. “In the past, they always talked about (in student government) ‘hey, we’re getting a statue’ and then it kept falling through.”

Student Body President Luke Young said the executive members who were behind the proposal did not want to be the next line of people to promise something and not deliver.

“Now that we’re getting fairly close (to acquiring the statue), we thought now would be an appropriate time (to tell everyone),” Young said.

Pierce said this was also the soonest the proposal could be brought to the senate because it had to first be approved by the Board of Trustees.

“We weren’t trying to dodge it, we were just trying to make sure we followed the proper chain of command,” Young said.

Pierce said senators are given a week to collect feedback on the statue from the student body, and if there are concerns, the bill can be tabled for a later date.

Young said asking students for feedback is a senator’s job, and this week it is the senator’s responsibility to get feedback.

He said senators are told to make sure they are talking to classes and groups, and this is the current culture that has been set in student government as a whole.

“I don’t think everybody does it all the time, but that is what they’re supposed to do and they are aware that that is their responsibility,” Young said.

Pierce said the interest for a statue originated years ago when he was a freshman, and over the years, he and other senators have gathered positive feedback about it from different people on campus.

Will Outzen, the student speaker of the senate, said he gathered feedback from the “First Thursday” event, which started last semester.

The “First Thursday” event was a way for senators to talk with students and ask what types of things students want to see on campus or want to be done.

Outzen said during the first installment of First Thursday he encountered students who were interested in a statue on campus.

“The overwhelming feedback I got, which I passed onto everyone else, was positive,” Outzen said.

Although senators have a week to find feedback and formulate a decision on the proposal, Young said the vote does not have to always be yes or no.

“If we feel like the general consensus from senators is we need a little more time to talk about it, that can be a thing,” Young said.

When it came to sending out a survey on the panther statue, Young said the response rates for most of these are very low, which makes it hard to get a balanced look of what students think overall.

The statue is expected to be in front of the north side of Booth Library and is expected to help with campus beautification and recruitment, both Young and Pierce said.

“It shows (prospective students) that (current students) are making an investment in the school,” Outzen said. “You don’t build a statue unless you plan on being around for a long, long time and we do intend on being here for a long time.”

The Student Senate will take a vote on the bill at its meeting Feb. 7.

Pierce said if students have any concerns they can reach out to senators or stop by their offices at the Student Activities Center.