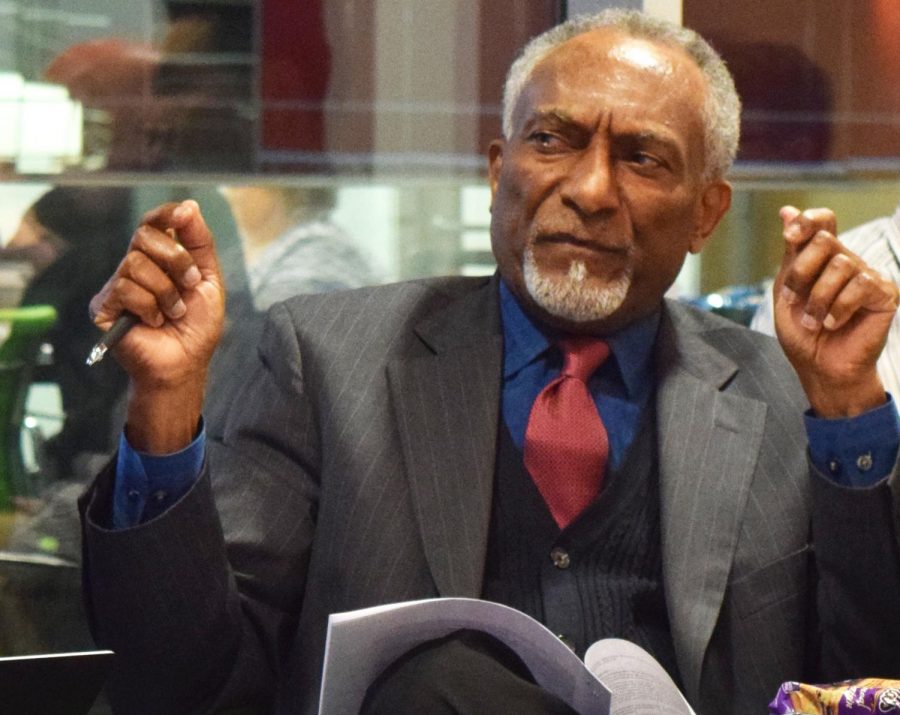 Brooke Schwartz | The Daily Eastern News Teshome Abebe is an economics professor and is also a member of the Faculty Senate. He said he thinks more discussion is needed about how to better structure organizations on campus to enhance shared governance.

Members of the Council on Academic Affairs attended the Faculty Senate meeting on Tuesday to continue a larger discussion on shared governance and how it applies to Eastern’s organizations.

At their last meeting, the Faculty Senate discussed the possibility that their bylaws could make them the overseers all committees on campus.

This was something the Higher Learning Commission looked at in its 2014 report on Eastern, which noted the lack of communication between the governing bodies on campus.

The Council on Academic Affairs discussed in its meeting last Thursday that they believed it would be inefficient and problematic to have the Faculty Senate make all final decisions on campus.

CAA member Rebecca Throneburg, a communication disorders and sciences professor, said she has seen examples of how shared governance already affects decisions made about campus affairs back in 2015.

It was that year that Throneburg was on a committee looking at general education courses, as another concern voiced by the Higher Learning Committee in 2014 was that there was not a body looking at these.

“We had a (general education) model that we thought we were going to approve at the end of 2015,” Throneburg said.

Though the committee went around to 16 other groups and thought this model would be approved, it was not.

“This is one of the concerns about shared governance,” Throneburg said. “In March … of 2015, … after all that work, Faculty Senate said, ‘Well, we want to referendum and ask the faculty to vote if they support this or not.’ … We could say that’s fine, … you can ask them, but what happens whenever we’ve had three years of work with 60 faculty totally studying the project … What was the outcome of that? (It) was a little bit disheartening.”

The senate did not send out a referendum, but the threat of one was enough to cast doubts about the model, and it did not get approved that spring, Throneburg said.

This, along with other reasons, was why the CAA was unable to support an organization structure that had the Faculty Senate as the main decision-making body.

There was a similar model that ended up being approved, but not until 2016.

After looking at shared governance structures of other universities, members of both the CAA and the Faculty Senate discussed the creation of one large organization, which would take the place of the Faculty Senate.

This organization would split into subcommittees, with some being other organizations currently on campus, like the CAA.

Doing this would eliminate a step during the course approval process, as the members of CAA would also be on the Senate, and could therefore approve courses for both organizations.

Faculty Senate member Teshome Abebe, an economics professor, approved of this idea, saying the reason the senate brought up being a final-decision organization in the first place had to do with trying to better Eastern, as well as make it more efficient.

“I think we seem to conflict on two issues, both here at the senate and at the CAA. We want to do things efficiently, but we also plan to do things better,” Abebe said. “Those two are not the same in my mind. One’s a moral issue, and the other is a productivity issue.”

The discussion about changing the structure of organizations on campus will continue, with continuing debate over whether these discussions should be during Faculty Senate meetings or whether a separate meeting time should be scheduled.

CAA chair Stacey Ruholl, a kinesiology and sports studies professor, said communication is the only way to continue improving shared governance as the committees head forward with this debate.

“(The Faculty Senate and CAA) can be better communicators in both directions. I think sharing minutes isn’t always enough,” Ruholl said. “Just keep an open mind and work together. (The CAA) kind of got on the defensive after … we saw the minutes of the Nov. 14 meeting, … (and) that doesn’t serve anyone well, (especially) when we don’t have a lot of the background or the intent of the situation. If we work together and we have membership, or at least participation in meetings, then that’s going to be a smoother transition to being a better or more efficient government structure.”