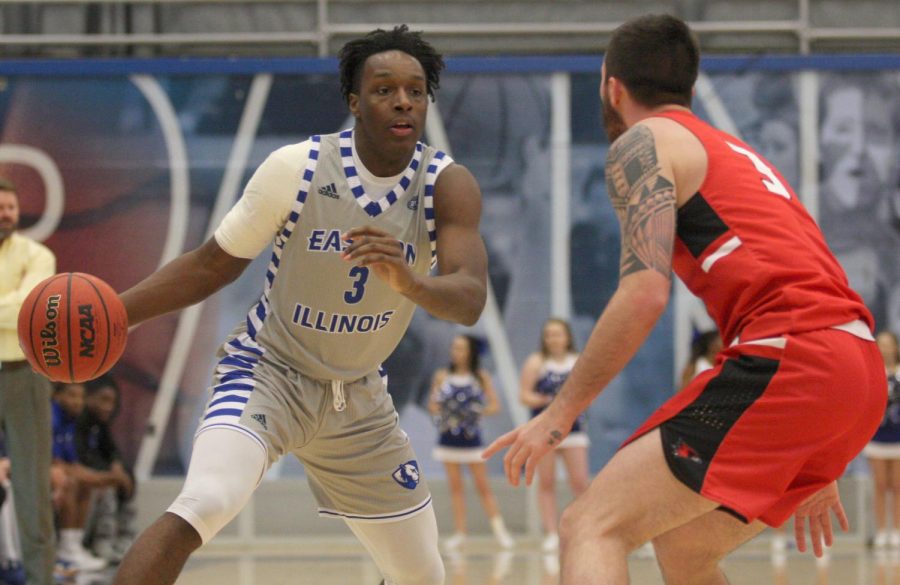 Eastern freshmen Mack Smith goes head to head with a defender from Southeast Missouri in his teams 86-74 loss Saturday at Lantz Arena. Smith scored 17 points on 6-of-10 shooting.

The Eastern men’s basketball team is in a unique time, missing key players to injury, but at the same time watching some young players grow.

It is no secret the Panthers have lacked consistent offensive threats as Terrell Lewis and D’Angelo Jackson have gone down with ankle injuries.

Over the past week one player specifically has broken out of his shell, and that is freshman Mack Smith.

Smith was named the Ohio Valley Conference Freshman of the Week, and it is safe to say he earned that feat after his recent stretch of conference play.

In games against Tennessee-Martin and Southeast Missouri, Smith averaged nearly 20 points and nine rebounds per game.

His jumper stayed hot and most of his points continued to come from beyond the arc, boasting a 52 percent rate from there.

Smith has shown flashes of being exactly what this Panther team needs as they hit the most important stretch of the season.

He is as tenacious as anyone else on the court, regardless of size, and his lack of hesitation to take that smooth jumper from anywhere on the court is something Eastern lacked for the first half of the season.

And he also fights his way down low to grab rebounds off the rim, rather than hanging back in case of a ricochet. He put together a double-double night against Tennessee-Martin Thursday.

What is special here is the adjustments Smith has made from the beginning of the season to now.

Smith suffered a shoulder injury earlier in the season when the Panthers beat Fontbonne Nov. 24 and said he feels like he is back to a competitive level.

“I just had to find my way back in,” Smith said. “At the beginning of the season I was letting the game come to me, and when I came back I was forcing it. Now it’s coming back to me.”

With the Panthers in need of finding a secondary scorer to play along senior Montell Goodwin, Smith said he is confident that he can fill that role.

“Me coming in as a freshman and playing the amount of minutes I am, I feel like I can be the one to do that,” Smith said.

But being a freshman, comes with some learning curves and Smith is figuring that out, he said.

In high school, Smith, just like the rest of players who made it to the NCAA Division I level, were the best on their team. His high school coach let him know that before he left.

“My high school coach said ‘when you go to college, just listen to the coach because everything he says you’re going to have to listen to,’” Smith said. ‘“You’re not going to be the best one on the team. It’s just one big team of (the best) people.”

The Panthers are 3-5 in OVC play and have rematches with Belmont and Tennessee State; two teams the Panthers lost to Jan. 13 and Jan. 11. The Bruins have pushed their record to 7-1 and the Tigers are 3-5.