Defense a problem for men’s basketball team in loss 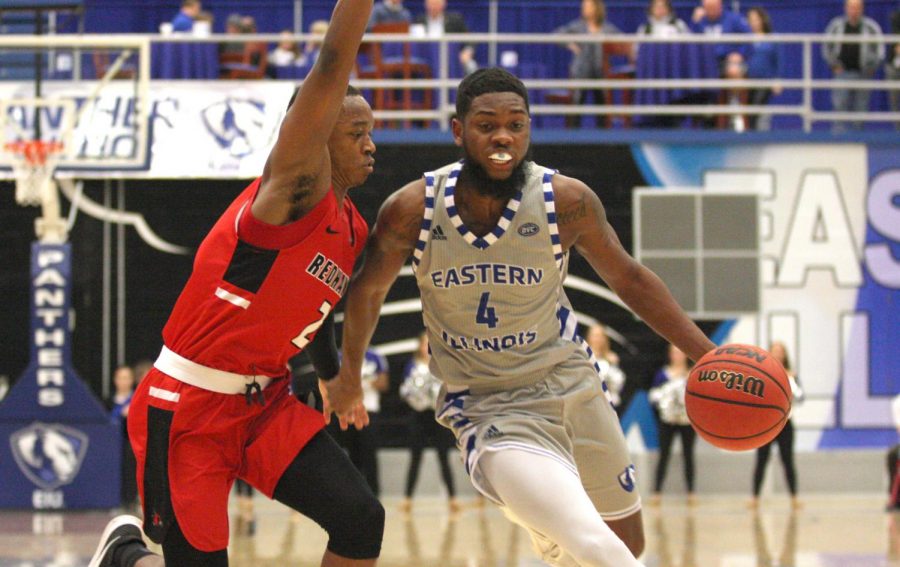 Eastern senior Montell Goodwin dribbles around a Southeast Missouri defender in the Panthers 86-74 loss to the Redhawks Saturday at Lantz Arena. Goodwin scored 13 points in the loss.

When the Eastern men’s basketball team finished the first half shooting 56.7 percent from the field, it became too complacent on just trying to win the game by scoring, which was something coach Jay Spoonhour said could not happen.

The Panthers finished the first half shooting 56.7 percent from the field, freshman Mack Smith made four three-pointers and Eastern had 12 assists on its 43-point half, and it resulted in an 86-74 loss to Southeast Missouri Saturday in Lantz Arena.

It followed up the first half with a 35.7 percent shooting performance in the second, while Southeast Missouri shot 46.4 percent. The Panthers scored 31 points and were only able to produce four assists on those points.

Spoonhour said the Panthers’ mindset has to be on the defensive end at all times.

“We were fortunate to have the lead we had (at the half),” Spoonhour said about Eastern’s first-half lead. “The reason we did is because Mack (Smith) had a great shooting half. The first half was great, he bailed us out.”

And Smith’s one three-pointer in the second half was not enough to aid the ailing Panthers on the defensive end.

“(Simmons) went crazy. He was great,” Spoonhour said. “He is a good player anyway, but that was a heck of a nice game for him. His stuff was huge.”

Spoonhour added that for a team to pick up a road win in the fashion the Redhawks did, it takes different players stepping up. Southeast Missouri had it and Eastern did not have enough of it.

Senior Muusa Dama brought down 12 rebounds, eight defensively, but said he and the rest of the Panthers still have to do more defensively.

“Some of their players stepped up and made good shots and we just couldn’t step our defensive game up to that level,” Dama said.

Still without two of its guards, senior Montell Goodwin has been playing a near absurd amount of minutes, averaging 39.2 over the last five games.

Goodwin plays a type of game that naturally gets him tired, but Spoonhour has not had much of a choice to keep him in for the full 40 minutes.

“The Thursday-Saturday games, it takes a toll for a guy like Silk (Goodwin),” Spoonhour said. “He had some plays where he looked tired on, but don’t have much choice. He is doing an unbelievable job. We’re throwing so much on him.”

With the intense workload, Goodwin has done all he can to give the Panthers enough to win. He finished Saturday’s game with five assists and just one turnover.

“It’s unfair, but he is doing what he has to do,” Spoonhour said. “You can’t ask him to do anymore (than what he’s doing). He’s playing a different position, he’s guarding a guy faster than him every game, and he’s doing a good job of it. You’re asking him to do a ton.”

Eastern is at 3-5 in OVC play and on the outside looking in for an OVC Tournament spot, but still have 10 games left on its schedule.

And as Dama said, it is not going to get any easier.