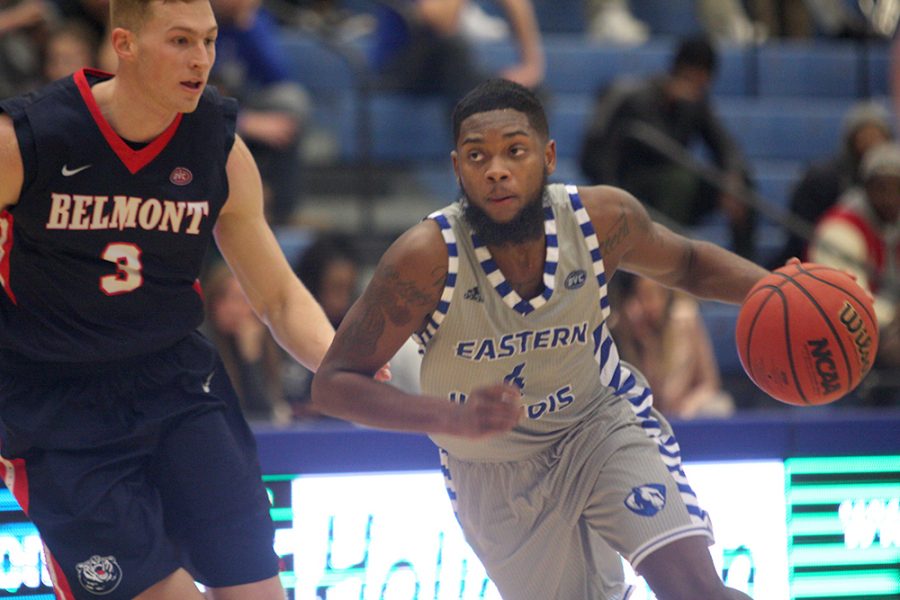 After picking up two straight OVC road wins, the Eastern men’s basketball lost back-to-back contests on its own floor putting it at 2-4 in conference play.

The Panthers have two more chances to get back to even, starting with Tennessee-Martin Thursday at 7:30 p.m. in Lantz Arena.

The Skyhawks have also had a tough start to conference play as they are 1-5 to start the season and in a tie for last in the standings.

Eastern split the two games with Tennessee-Martin in 2016.

The Panthers’ loss was on the road in double overtime and they got revenge in Lantz Arena one month later.

Following the Panthers’ loss to Belmont Saturday, coach Jay Spoonhour said the Panthers showed enough where they can build off of it despite losing the game.

Redshirt senior Matthew Butler is back as the leading scorer for the Skyhawks averaging 17.4 points per game, which leads the team. He also leads the team with 60 assists and minutes played with 37.2 per game. He scored a combined 24 points on Eastern in 2016.

Butler stepped into the role of being “the guy” for Tennessee-Martin this season.

“Matt had a tremendous junior season for us last year,” Tennessee-Martin coach Anthony Stewart said at the OVC media day. “He’s really dedicated himself to having the best season he can have.”

Senior Montell Goodwin has carried much of the load for the Panthers lately, playing nearly every minute of every game, being the leading scorer most nights and being the team’s leader on the court.

Eastern showed signs of turning the corner against Belmont, but it put that to rest hitting 52 percent of its three pointers, making Goodwin’s 26-point performance for not.

The Panthers are seeking a little more contribution out of the rest of the roster.

“We’ve got to get everybody, they don’t have to be great, but we have to get everybody to have consistent play,” coach Jay Spoonhour said following the Belmont game Saturday. “We’re getting close to that.”

Eastern will wrap up its home stand Saturday against Southeast Missouri.