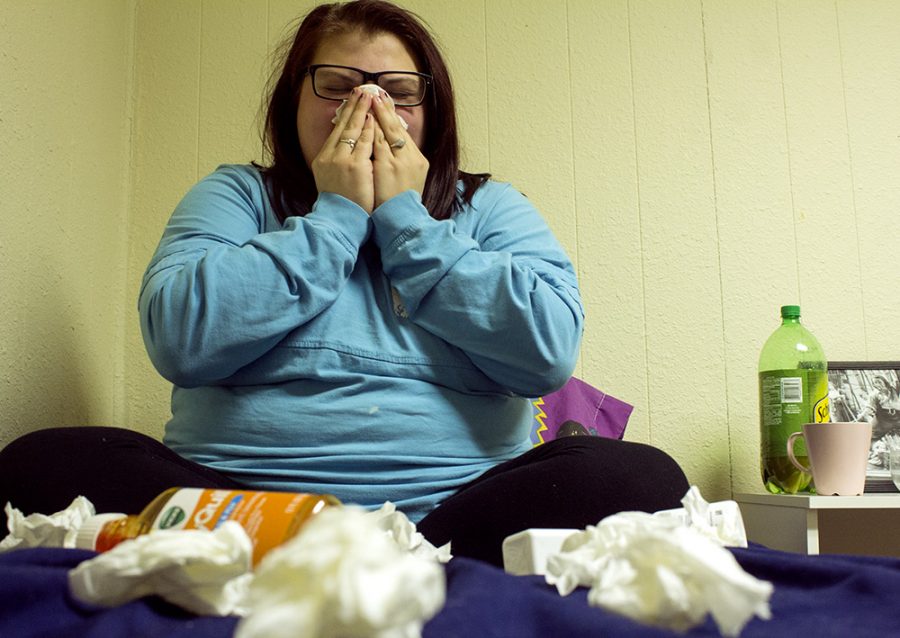 Health centers and clinics are seeing a larger number of cases of influenza this year.

There have been increased reports of influenza through both the state of Illinois and the nation, said Eric Davidson, interim director of Eastern’s Health and Counseling Services.

The levels are not yet comparable to the 2014-2015 flu season, but the season is still somewhat early, he added.

Lizzy Howard, a care partner at Sarah Bush Lincoln Health Center, said she believes influenza is more prominent this year because it started spreading so early. According to Howard, the flu vaccine contains treatment that only cures one strain of the virus and because of the multiple strains it is not possible for the vaccines to prevent anyone from getting every strain.

“There are two different types of viruses that cause the seasonal flu, Influenza A and Influenza B, and there have been more cases of Influenza A this year,” Howard said. “Every time I have gone to work I have had at least four or five patients that have been on droplet precautions to treat Influenza A or because they are having flu-like symptoms.”

Karson Ogden, another care partner at Sarah Bush Lincoln Hospital, said that although there has not been any overcrowding at the health center this year, they have had to open up another part of it to house more patients.

“It has definitely been a strong virus that has affected many people this year,” Ogden said.

Influenza B mutates about two to three times slower than Influenza A does, so it is less likely to occur in a pandemic.

Influenza A contains multiple different strains, and that is why it is likely to hit humans harder, Ogden said.

Howard said everyone needs to take necessary precautions to prevent contracting any type of influenza.

“It is very important for everyone to wash their hands as often as possible, stay home when you are feeling sick, and try to limit the amount of contact you have with people who are sick,” Howard said. “If you do get the flu, stay hydrated, get lots of sleep, take medicine such as Tylenol to fight fevers and take hot showers to loosen up all the congestion in your body.”

Ogden suggested people wear a face mask if they are in contact with people who are sick.

“At least you can cover your face to prevent inhaling any germs that others may have,” she said.

Davidson said there have been students on campus who have been treated as well.

“We have many students seeking care for influenza-like symptoms,” he said. “We’ve also confirmed positive influenza test results in some of these patients.”

The Health and Counseling Services clinic is trying to make sure the facility has a higher degree of cleanliness and sanitization at this time, Davidson said.

Like Howard and Ogden, Davidson encourages students to take certain steps to prevent themselves from getting influenza.

“We encourage the three C’s — Clean, Cover and Contain,” Davidson said. “Students need to clean and wash hands frequently, cover their mouths and nose when sneezing and coughing and contain the spread of infection by not sharing items such as utensils, cups and pens or pencils.”

The clinic is implementing standard procedures for moderate to heavy flu seasons.

“All students entering the medical clinic are reminded by signage to sanitize their hands when entering,” Davidson said. “Students exhibiting influenza-like illnesses are asked to wear face masks and to try to maintain distance from other students.”