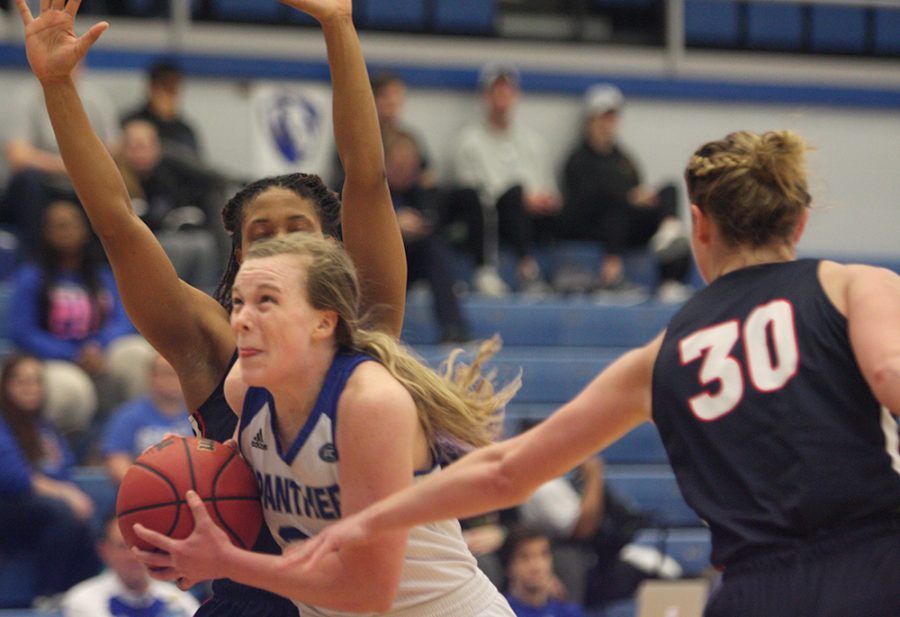 Sophomore Danielle Berry cuts to the basket in the Panthers’ 86-58 loss to Belmont Saturday in Lantz Arena. Berry has started every game for Eastern this season and averages 7.5 points and 4.5 rebounds per game.

It would have been easy to write off the rest of the Eastern women’s basketball season when senior point guard Grace Lennox went down for the season, playing her last game Dec. 8 in a loss to Fort Wayne.

A team that was already struggling with a 1-7 record had just lost its top scorer and team leader and with her backups being two freshmen, who up to that point had combined for zero starts, there was, at first, a slight sense of “oh crap” among the team as their seemingly invincible point guard was suddenly sidelined for the entire season.

The feeling of “what now” subsided quickly however, as the injury opened up a door of opportunity for the team’s young guards to prove themselves on the court.

“(The injury) allowed us to grow a lot more though because we were like, ‘OK, it’s time for us step up, we have to do something about it,’” sophomore point guard Danielle Berry said.

Berry, along with the two freshmen guards waiting in the wings, Karle Pace and Taylor Steele, have not only had just an increase in minutes because of the injury, the three young guards have upped their level of play as well and have the Panthers playing some of their best basketball of the season.

Each one of Eastern’s trio of young guards has brought their own unique styling to the court in the wake of injuries to Lennox and junior guard Carmen Tellez.

Berry has been a rock for the Panthers all season long, starting in all 17 of Eastern’s games this season, taking over full responsibity of the point guard duties for the injured Lennox.

Playing point guard is nothing new for Berry, as she played the position in high school, but taking over the position for Lennox in her sophomore season was not something she expected to be doing.

“I was just kind of expecting to play the same role as like an off-guard, but after (Lennox) went down I was like, ‘OK, I can do this. I can take over this position,’” Berry said. “I have played point my whole life. I love it. I love playing point. I feel like more myself at the point position.”

Berry went from a team last year that had a starting five made up of mostly juniors and seniors, to a team where she and fellow sophomore Jennifer Nehls are the two oldest players in the lineup.

“I think that Jen and I have kind of embraced it,” Berry said. “And these two (Pace and Steele) definitely don’t play like freshmen, so it’s not like we’re out there playing with freshmen and I feel like we’re all kind of facing it.”

Pace has seen a large jump in both playing time and productivity on the basketball court, often doing her best Lennox impression with strong drives and finishes at the basket. In the first eight games of the season, the freshman was only playing about 4.8 minutes per game. After the injury and some lineup changes, she has seen her average minutes jump to 24.7 per game, and she has been sure to take full advantage of the increase.

She has had four games with double-digit scoring since her increase in playing time, including an 18-point performance in the Panthers’ home win over Tennessee State Jan. 11. She has also racked up 11 steals in the team’s last three games.

“Defense is first,” Pace said. “I have been getting steals, which are leading to transition layups, which are easy points for me.”

Steele, in the meantime, has turned herself into the team’s leading scorer. She is averaging 9.6 points per game on the season, appearing in all 17 of Eastern’s games, starting in nine, but in her nine starts, her production is much larger.

Since acquiring a starting role after the injury to Lennox, Steele is averaging 14 points per game and has added four games where she has led the team in scoring, including a career-high 21-point performance against North Texas Dec. 20.

“In high school I always started, so maybe it’s just I was comfortable with starting,” Steele said. “Definitely getting back in the starting five helped me be more comfortable on the court and just playing my game and not focusing on doing too much.”

Although Lennox will not be on the court playing with Pace, Steele and Berry this season, her voice is definitely still heard by the trio from the bench, as she has been sure to be encouraging and supportive of the group from the bench.

“Its just the little things. (Lennox) helps you see the things you don’t even think about during the game, which is really nice,” Steele said.

“I asked her at halftime (of the Tennessee State game), ‘Do you have any tips for me?’ And she was like, ‘Um, yeah, keep playing how you’re playing,” Pace added.

As these young players continue to progress on the court for Eastern, the goal with or without Lennox remains the same: Make the conference tournament.

All three guards agreed that the team still definitely has a chance to make the conference tournament based on the basketball they have been playing lately. Currently Eastern has a 1-5 OVC record.