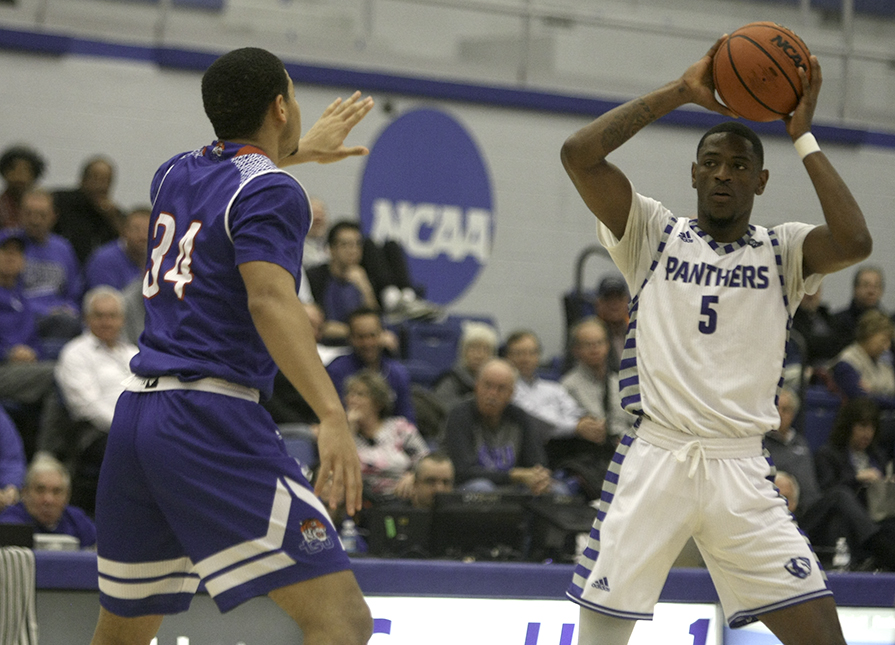 Senior Ray Crossland looks for a teammate to pass to during the first half of Thursday’s matchup with Tennessee State.

The Eastern men’s basketball team actually put together a strong night at the free throw line, shooting 72 percent, improving on its season average of 66 percent.

But when Eastern needed the biggest free throw of the game, it did not get it. Senior Ray Crossland missed the first of two free throws with six seconds left in the game, where making both would have tied it.

Senior Montell Goodwin said they have to focus more on free throws.

Tennessee State, instead, came away with a 69-65 win in the Panthers’ first OVC home game.

The Panthers also had two unforced turnovers with the game tied with just over one minute to go in the game and the Tigers took full advantage. Tennessee State grabbed the lead 65-63 off the second turnover by senior Muusa Dama.

“We have to be really, really sharp in how we run stuff, because we can’t run much,” coach Jay Spoonhour said. “We have to execute things very well and if teams take us out of being able to execute it, we’re left with have to be able to make plays.”

“That’s what this game was about,” Spoonhour said. “Having the ability to drive in and kick it, drive in and shoot it or drop it off to a guy and finish and we didn’t do a good enough job.”

Neither side shot the ball particularly well, as both shot below 40 percent, and considering where Tennessee State started the game, it was clear it got the Panthers’ out of their rhythm.

The Tigers missed their first 10 shots of the game,  and Eastern got off to a 14-3 lead. Over that stretch, and throughout the game as well, Tennessee State’s defense made the Panthers’ uncomfortable.

Although the Tigers shot poorly through the first 8:28, Goodwin said the Panthers could have done more over that stretch.

The Panthers were still without senior Terrell Lewis and junior D’Angelo Jackson, Eastern’s two best playmakers, and may be for a while longer.

Spoonhour said the Lewis will most likely be evaluated in two weeks on his left ankle and then he will decide if he wants to redshirt the rest of this year and come back next year, or finish off the tail end of the season.

He was also evaluated on Tuesday.

His decision is going to be up to him, since it is his career, Spoonhour said

Jackson’s future; however, is not as bright as he will be evaluated in a week, except he will find out if he will need surgery on his left ankle.

He has two sprained ligaments on both sides of his ankle, Spoonhour said.

“We’ll just wait and see, but it does not look that good,” Spoonhour said.