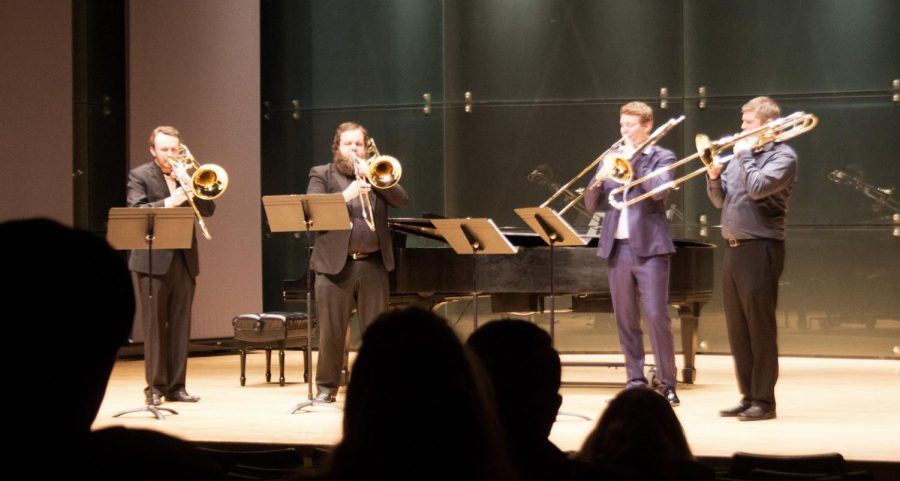 When trombonist Peter Steiner arrived from Vienna, Austria, to Eastern,he had never met his accompanist, collaborative pianist Kevina Lamb, before.

Music professor Jemmie Robertson discovered Steiner through his friend Bradley Palmer, who serves as a trombone professor at Columbus State University in Georgia.

When Palmer and Steiner collaborated on a CD, Palmer sent Robertson some clips of their work.

“I admire his musicianship in the pursuit of excellence,” said Robertson.

He decided to invite Steiner to perform at Eastern as the musician was about to embark on a tour of college campuses last year.

This year, Steiner returned to Eastern as part of a 40-college campus tour across the country.

Aside from Eastern, he will also be performing at Millikin and DePaul University.

“I chose the trombone because it is the loudest instrument and my mom didn’t want me to play the drums,” he said.

Steiner decided to continue his dream of music performance at the Music Conservatory in Italy.

Then, he attended the Mozarteum Salzburg in Austria.

He then attended the Juilliard School of Music where he met Joe Alessi, a composer at Juilliard who has hosted workshops attended by Robertson.

Steiner has performed at the Vienna State Opera and works for The Thein Instrument Company, in addition to making campus tours.

Steiner’s advice for aspiring musicians is to “be curious, and keep finding interesting things.”

Steiner’s performance Tuesday featured seven tracks, only one of which was initially written for trombone.

He said the piece expressed “the classical and jazzy components of trombone very well.”

Steiner had to transcribe other pieces that were initially written for instruments like the flute to fit his own.

Robertson also joined in for the quartet.

“I enjoy going on campus tours because they’re the easiest way to play as much as possible and to work with great students,” Steiner said.