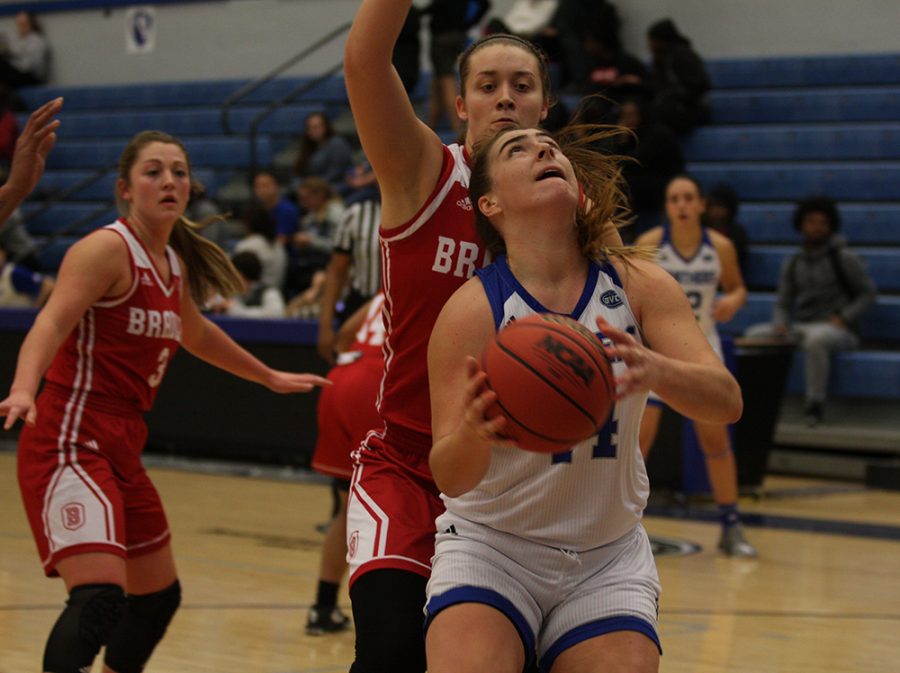 Eastern freshman Grace McRae tries for a layup underneath the basket at Lantz Arena against Bradley on Dec. 5. She had five points and five rebounds in the loss for the Panthers.

A meager four-point first quarter was too much for the Eastern women’s basketball to overcome as the Panthers were handed their 12th straight loss Saturday against Eastern Kentucky.

Eastern Kentucky outscored the Panthers 22-4 to open the game, and that 18-point margin proved to be detrimental to Eastern’s effort as they lost by a final score of 67-51.

Coming off of a game against Morehead State where Eastern played very well, head coach Matt Bollant found it difficult to pinpoint exactly what went wrong in the first quarter against Eastern Kentucky.

“Part of that is Eastern Kentucky did such a good job defensively so give them credit,” Bollant said. “But we just struggled to make shots early and didn’t play very well in that first quarter.”

In a matchup of the Ohio Valley Conference’s bottom two offenses in terms of scoring, two players gave Eastern Kentucky the difference needed to win at home.

Bria Bass had a game high 25 points for the Colonels and guard A’Queen Hayes had a 20-point, 16-rebound performance as the Eastern Kentucky duo nearly outscored the Panthers all by themselves.

The loss to Eastern Kentucky was the seventh game the Panthers have played in the absence of senior point guard and leading scorer Grace Lennox who will miss the rest of the season after suffering a knee-injury.

Eastern was also without junior guard Carmen Tellez who missed her second straight game with a sprained ankle.

Steele had 13 points but struggled from the field shooting 3-of-14 and Pace added nine points on 4-of-12 shooting.

“To have our two top scorers out (Lennox and Tellez) certainly it is tough, so we kind of had to throw the young kids in there and have them grow up on the court. Both Taylor and Karle have done a good job of that,”Bollant said.

As a collective Eastern shot just 28.1 percent, with just one player, junior forward Halle Stull, shooting a positive number from the field.

Stull led Eastern with 16 points on 6-of-9 shooting coming off the bench.

Like many of Eastern’s games this season, it was a tale of two halves for the Panthers.

After starting the game with the four-point first quarter, the Panthers were outscored 17-13 in the second quarter, but shot seven points better in the second half, outscoring Eastern Kentucky in both the third and fourth quarters.

Rebounding played a big factor in Eastern Kentucky ultimately edging out the Panthers. The Colonels grabbed 51 rebounds to just 31 by Eastern.

If there is any stroke of luck for the Panthers in the rebounding category, it is in the fact that just 12 of the 51 rebounds for Eastern Kentucky came in the offensive side of the floor.

Eastern Kentucky moves to 5-8 overall and 2-2 in the OVC.

The Panthers next game is at home Thursday against Tennessee State 8:30 p.m. at Lantz Arena.