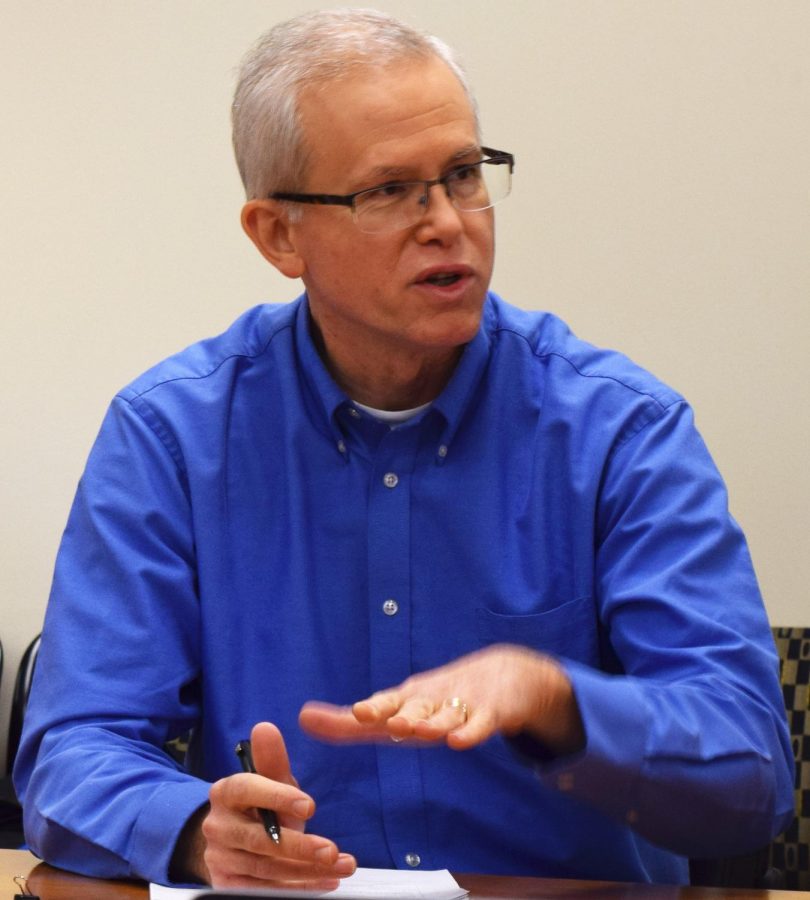 Larry White is a professor of management information systems and operations management. He also represents Eastern on the faculty advisory board of the Illinois Board of Higher Education.

The IBHE is an agency meant to allow all Illinois universities, public or private, to work together to expand and grow all of Illinois’ higher education.

One big topic of discussion at the IBHE has been the positives and negatives to expanding dual credit programs, which consist of classes a high school student can take for college credit.

Dual credit courses are becoming more popular in high schools around the nation and might be causing some problems, as students may have the class credit, but might not be mentally prepared for college, White said.

“Students are (possibly) coming out of high school now with essentially as much as a full freshman year of credit,” White said. “The question is, are they really prepared to be college sophomores when it’s their first time stepping on campus.”

Jon Oliver, a kinesiology and sports studies professor, brought up a concern about whether the credits received in high school or a community college are actual substitutes for the university equivalent.

“When we establish partnerships with junior colleges and other academic institutions like two plus two’s, we relinquish some of that control of who is teaching the … courses,” Oliver said.

With two plus two programs, students spend two years a community college then the rest of the time at a four-year institution.

Economics professor Teshome Abebe said he wondered if the increasing number of online GEDs and college credits students are starting college with was something that could disrupt universities in the future.

“Are we ignoring something that is likely to engulf us here soon?” Abebe asked.

Provost Jay Gatrell was also present at the senate meeting to update members on current administrative initiatives, including an effort to streamline undergraduate student programs.

The Workgroup Review Committee, which is reviewing recommendations from vitalization project Workgroups No. 8 and 9, has been discussing the idea of a University College, which would house all undergraduate student services.

However, Gatrell has been looking less at the services’ physical proximity and more at their online proximity.

“We do not currently have a virtual “one-stop” on campus, and I would love to have (one,)” Gatrell said. “Right now, you tell a student (to) go to Paws or go to this. What we really need to have is one virtual home that serves all student populations and all functionalities.”

This idea appealed to the senate, and they said more research is continuing to be done on the best way to accomplish this “one-stop.”

The senate has also been looking at how the shared governance between university committees is supposed to work, with some progress being made on more routinely keeping communications between the different committees.

Stacey Ruholl, chair of the Council on Academic Affairs, has been invited to speak to the senate at its Jan. 23 meeting, where a easier and more clear line of communication between the groups can be discussed.

The senate has also updated its website so all university committee meetings’ minutes can be accessed and found in one place in another effort to increase all around communication.