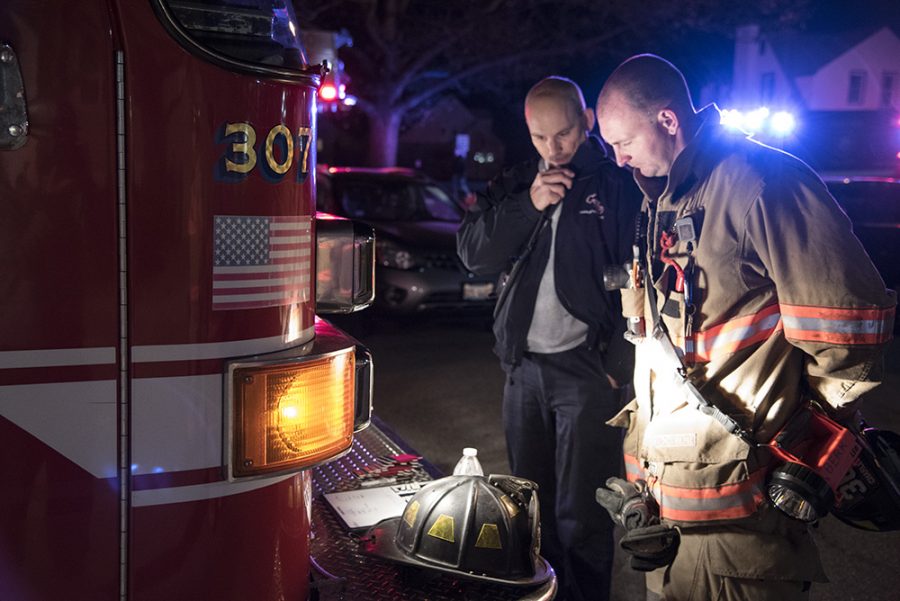 Steve Bennett (left), chief of the Charleston Fire Department, discusses the situation with a firefighter in the parking lot of Douglas Hall Wednesday night after the building's attic caught on fire.

Emergency vehicles responded to a fire in the attic of Douglas Hall at 7:33 p.m. Tuesday night.

Mark Hudson, director of university housing and dining services, said the ventilation motor that caused the fire will be replaced.

“We had a motor that froze up and as it froze up it threw out some sparks and created a little fire,” Hudson said. “Electricians were on the spot right away.”

Michelle Wayne, university facilities and management electrician, said she was part of the team working on the motor when the fire started.

Wayne said, “When I saw the fire ignite I went over and it was small, I’d like to say a handful of fire and smoke and I tried to spread the fire to get it to go out.”

She said this proved ineffective so they lowered a bucket and filled it with some water to smolder it.

Steve Bennett, Charleston fire department chief, said when his crews arrived they found a light haze of smoke on the third floor.

“There’s an HVAC system up in the attic and one of the electrical motors sparked causing the insulation in the attic to catch fire,” Bennett said. “Our guys went up. We had to use a water can to put the rest of it out. Minimal damage, we just had to clean out some insulation and clear the smoke out. So really there’s no damage whatsoever. Just the insulation burned and caused a bunch of smoke.”

He said there were no injuries.

“The Eastern workers did a great job at using the fire extinguisher. If they hadn’t, I’m sure that there would have been more damage,” Bennett said. “Their actions got people out of the building quickly and they also helped prevent further damage so they should be commended.”

Charleston police sergeant Ryan Risinger said some students did not follow evacuation procedures which leaves Housing with something to take care of.

“There are some students who did not respond to the fire alarm,” he said.