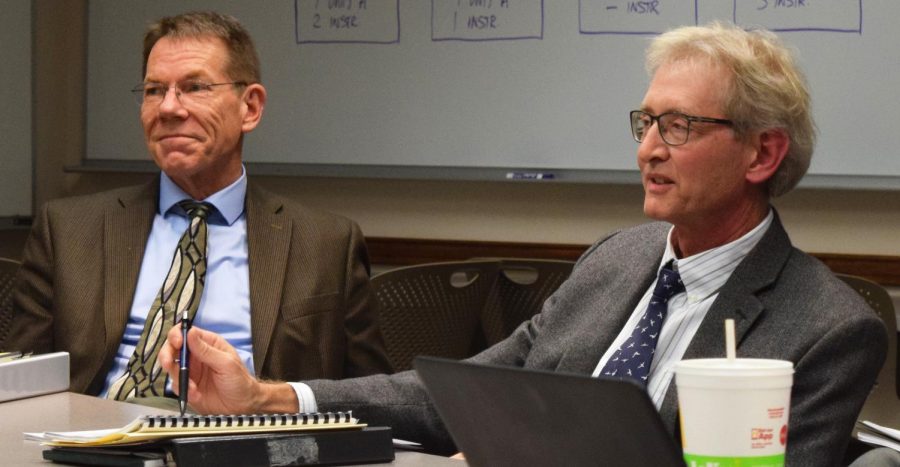 Stephan Lucas, the interim associate dean of the College of Education and Professional Studies and Douglas Klarup, interim dean of the College of Sciences, provided a dean’s view on the restructuring of colleges. They both agreed that starting a new college was not possible, but rearranging what Eastern already has could be done.

The Workgroup Review Committee focused on Workgroup no. 9’s proposal to create a “University College” and add a College of Health at its meeting Friday.

A University College would house all undergraduate student success programs in one building.

According to Workgroup no. 9’s proposal, these success programs include the Center for Academic Support and Assessment, Gateway, TRiO, the Student Success Center, the Office of Study Abroad, Disability Services, General Education coordinating or other offices related to undergraduate student advisement and academic support services. Committee members agreed it would be nice to have all these programs in one place, as it could help students find these services.

Committee members said this would not be feasible financially.

The addition of a College of Health was attractive to many committee members, with a plan to move enough programs around so few new faculty positions would be created and no extra dean position would have to be added.

Although some members argued that the addition of this college would help draw students in, others, such as Douglas Klarup, interim dean of the College of Sciences, thought an additional college would mean little to nothing to prospective students.

“You go to admissions now, see a drop down, it does not divvy the majors up into colleges. The colleges don’t come up,” Klarup said. “(Potential students) pick a major, and then they get directed to the department. So what the role of a college in recruitment for students is a little vague.”

Stephen Lucas, interim associate dean of the College of Education and Professional Studies, said the committee needs to be very clear about its reasoning behind any structural changes.

“Those (new college proposals) need to be coherent (and) not just for the sake of change,” Lucas said. “It’s not easy, because you’re talking about people and change.”

Billy Hung, chair of the Workgroup Review Committee and biological sciences professor, said some of the changes the committee is looking at making through restructuring colleges might be possible through changing the geographic locations of programs.

The committee also explored the idea of creating a school of fine arts within the College of Arts and Humanities.

The goal of this school would be to better use the Doudna Fine Arts Center and the Tarble Arts Center in daily classes and programs.

The committee’s next meeting will be Dec. 1. At this meeting, the committee will be reviewing a written draft of its final proposal, which will be due in its entirety in January.