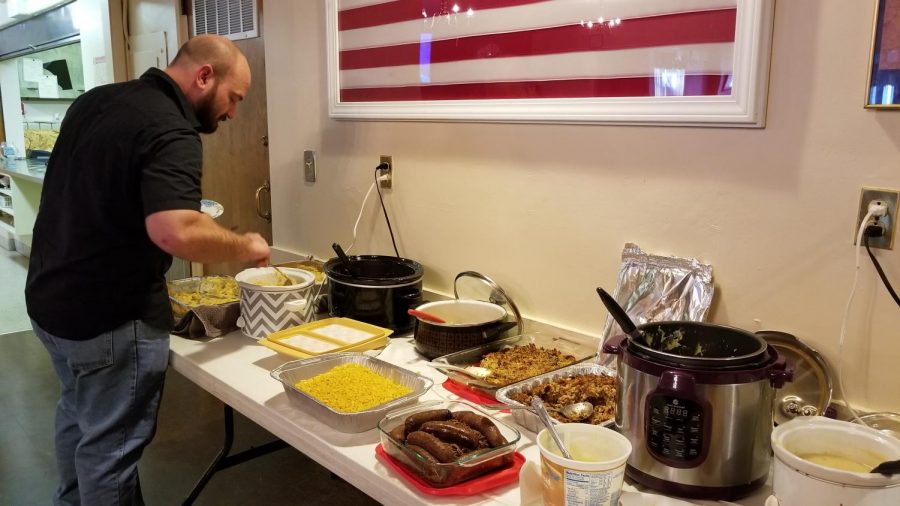 Scott Kroner, a senior business major, fills a plate with food during the Thanksgiving potluck last Thursday at the Charleston Elks Lodge 623. “The meaning of Thanksgiving is to eat until you cannot eat anymore, then take a nap. If you’re not doing that, you’re doing it wrong,” Kroner said.

A Thanksgiving potluck held by the Charleston Elks Lodge 623 this past Thursday raised money for charity while also giving members the chance to connect with old and new friends.

More than 25 people brought homemade dishes to share with the 60 people who came to enjoy the meal.

“The turkey is definitely number one, ham and meat are always what people prefer,” John Hargis, club manager of the Charleston Elks Lodge 623, said. “Corn and potatoes with a special recipe, desserts like pumpkin pie, those foods associated with Thanksgiving—we had a whole a lot of those here.”

“I like to cook; that makes me feel relaxed,” Lee said.

This is the first time the Elks have had a Thanksgiving potluck that was open to members’ friends and family members.

The previous event was only for members.

“The meaning of Thanksgiving is to eat as much as you can and take a nap,” Scott Kroner, a senior business major and Elks member, said. “If you’re not doing it, you’re doing it wrong.”

Sheryl Williams-Hargis was able to meet a friend she has not seen for a long time at the potluck.

“He made my Thanksgiving the minute he walked in the door,” she said. “I am so thankful to see his face.”

During the potluck, the Elks raised money for a 50-50 drawing, the winner of which was announced on Saturday.

Proceeds from the drawing go to the Elks’ charitable organizations, Krista Pierson, the president of Charleston Elks Lodge 623, said.

“It’s our first year doing it and we have come up with close to $2,000 to split in half,” Pierson said. “That’s $1,000 that goes to the charitable organization and another $1,000 can make someone’s own Christmas come true.”

Other ways the Elks raise money are with drawings, raffles and even a “curse jar,” where if someone swears they owe the club a dollar.

Money from these will go to the Children’s Care Corporation, which provides medical and financial assistance to children who need it.

“We are a great community here in Charleston,” Pierson said. “Be part of someone else’s life but not just your own.”