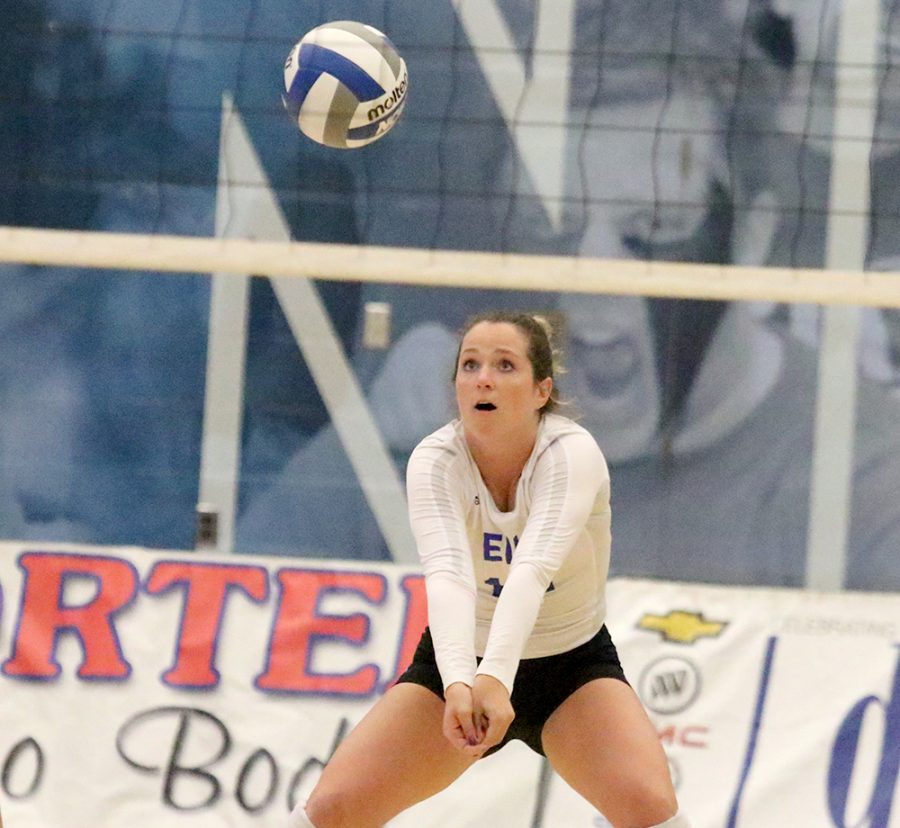 Anne Hughes gets ready to dig the ball in the Panthers’ 3-2 win over Jacksonville State Oct. 21 in Lantz Arena. Eastern is on the road at Southeast Missouri Saturday.

Oh what a difference a year can make.

The Eastern volleyball team has come full circle from last season when it won just five games all year, but now the Panthers are making some history.

Eastern had the odds against it heading into its first round match of the OVC tournament against No. 2 Southern Illinois- Edwardsville.

That could not stop the seventh seeded Panthers from pulling off the upset in a four-set match topping the Cougars 3-1.

Eastern followed the motto of it is not how you start, instead it is how you finish and that was the case as Southern Illinois- Edwardsville took the lead after one set.

That first set had the most action of any in the match as there were eight tie scores and four lead changes.

While Southern Illinois- Edwardsville went on to win the back-and-forth set, the Panthers were quick to rebound.

Eastern won the final three sets behind some vital performances from their All-OVC players.

Allie Hueston led the way with kills notching 13 in the match while Taylor Smith lived up to expectations snagging her 13th double-double of the season with 16 assists and 20 digs.

Gina Furlin also made a difference for Eastern as she put up 22 assists, and the Panthers as a team set some special marks too.

Eastern hit for its best average of the season in the second set with a .205 mark, and that led the team to 25-21 victory.

The defense stepped up for the Panthers with Anne Hughes playing a vital role, as she picked up a team-high 21 digs.

Maggie Runge also used her length to make a difference as she held a team-high six blocks as well.

It is a special way to start the tournament for Eastern, especially after not coming close to making it last year.

But the Panthers now have plenty of momentum as this marks the eighth time in program history they have reached the OVC tournament semi-finals, and it is the first appearance since 2014.

Eastern will need all of that momentum as they move on to face another team they may not be favorited against.

The Panthers take on No. 3 Murray State in the semi-final match Friday at 2:30 p.m.

The Racers are also fresh off a victory as they knocked off sixth seeded Jacksonville State 3-1.

Murray State has been strong all season, posting a 21-8 record in the regular season, while also riding out a six-game winning streak.