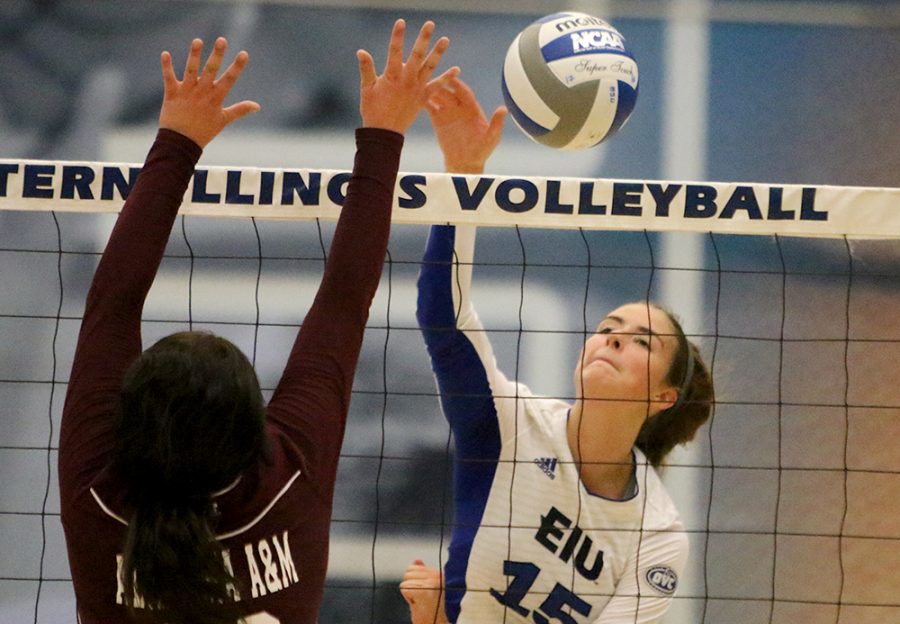 Freshman Laurel Bailey gets the kill against Alabama A&M Sept. 7 in Lantz Arena. Bailey was second on the team in kills with 24 in the regular season.Eastern starts the OVC Tournament Thursday against Southern Illinois – Edwardsville.

The Eastern volleyball team will launch a playoff run Thursday, as the No. 7 Panthers (14-14) play No. 2 Southern Illinois – Edwardsville (13-3) in the first round of the OVC Tournament.

Both matches against the Cougars during the regular season culminated in defeat, a trend the Panthers intend to change Thursday, as the team aspires to set the record straight.

Before Eastern volleyball could clinch a postseason berth, Morehead State attempted a last effort push for playoff contention. But the Panthers locked the door to the postseason behind them and hid the keys, winning two of the last three games.

A sense of excitement has engulfed the entire roster ahead of the match, a feeling the team has not felt since 2015, the last time the Panthers contended for a title.

The Eastern volleyball team’s impeccable defensive skills, which emboldened the Panthers in matches against offensive centric opponents, could prove consequential against the Cougars who, for the past 28 games, recorded very few service errors (1.26) per set.

The Cougars sized up well against conference teams, putting up 13.28 kills per set-the second highest average in the OVC.

Middle blocker Taylor Joens propelled the squad’s efficiency offensively, allocating a .319 hitting percentage, a crucial asset at a time when every team must perform at its apex or risk elimination.

The Panthers have transcended opponents in blocks, a prized commodity in the volleyball realm, for much of this past regular season.

“So I think early on in that first set against Southern Illinois Edwardsville, we need to establish our block, will be really important,” Wolinski said. “If we can do that, then it allows our back row to be reading and be in the positions they need to be able to defend the balls.”

While the Panthers narrowly lost to Southeast Missouri in the final game to close out the season, the Panthers won decisively (3-1) in the penultimate game against Tennessee-Martin, a team Eastern volleyball could potentially face in tournament play.

Although Southern Illinois Edwardsville holds the better record, the Panthers, by comparison, posted superior numbers in assists, blocks, kills and service aces for the season.

Considering the stakes for the game, the Panthers blue print to victory remains much the same.

“I do not think anything changes in terms of our approach. It is just the third time we are going to face SIUE, so we are hoping as they say that the third times the charm, which it will be, Wolinski said.

“But just fine tuning a couple of things we need to make consistent to put us in the position to beat SIUE,” Wolinski.