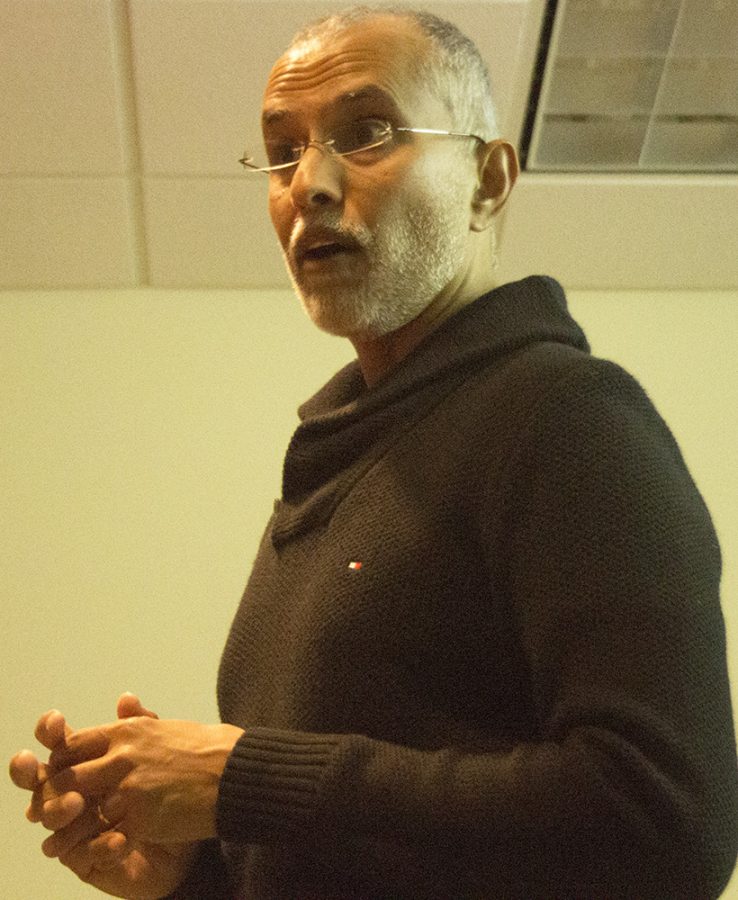 Britto Nathan, assistant chair of the biological sciences department, answers a question about Alzheimer’s disease and biochemistry at a lecture Wednesday night. The talk was put on by Eastern’s chapter of the American Society for Biochemistry and Molecular Biology.

Exploring the links between college habits and Alzheimer’s, Britto Nathan, assistant chair of the biological sciences department, gave a presentation Wednesday night about the causes and effects of the disease.

In 2017, 4.5 million people were diagnosed with what is known as Probable Alzheimer’s. The diagnosis is probable because one cannot truly know if someone died of Alzheimer’s until they perform an autopsy, he said.

“The brain is the most fascinating piece of machinery ever created,” he said.

College students do not think of their chances of being diagnosed with Alzheimer’s because it is known to affect people when they are older, but students are often exposed to the very causes that are seen in cases.

During college, students are known to not get enough sleep as well as not seeking proper medical attention for their depression, Nathan said. These factors along with a poor diet and exercise habits can increase the risk of Alzheimer’s disease.

Head trauma is a leading cause of patients with Alzheimer’s, he said.

Head trauma is most common in athletes, and it can become a problem if it the athlete does not take the proper steps to recover fully.

Not getting enough sleep is also a contributing factor to early on-set Alzheimer’s he said. This is because a person’s brain tries to overwork itself, eventually decaying the walls in the brain.

There are several diseases that get misdiagnosed as Alzheimer’s because of the similarity of their symptoms such as Parkinson’s, delirium and depression.

If untreated, depression can cause mild cognitive impairment. This causes the persons brain function to slow and eventually they will begin to have memory loss, which may contribute to Alzheimer’s later in life.

“It is a one-way track of declining,” Nathan said, referring to the disease, which shows rapid decline in memory loss, disorientation and hallucinations in an individual.

The United States contains the highest amount of people diagnosed with Alzheimer’s disease.

Nathan said 95 percent of cases of late on-set Alzheimer’s are diagnosed in people over 65 and two percent of patients diagnosed with early onset before they are 65. “It’s very tempting for me to change the year from 65 because I am 64, right?” Nathan said. “I wanted to change the number because it is kind of scary for me.”

Although the disease is often associated with people ages 65 and older, today studies are showing changes in the brain linked to Alzheimer’s in people ages 20 to 25.

Women also have a heightened chance of being diagnosed because of the high levels of estrogen women have in their bodies.

Nathan said that one of the scariest parts about the disease is that we know now in research is the same thing researchers knew when they discovered the disease.

As for the future of Alzheimer’s research Nathan said he wants to create a protein that will mimic the effects estrogen has on a brain with the disease.

Estrogen has shown positive effects on patients, but using estrogen to cure the disease can cause breast cancer.

Nathan said that researchers are trying to find a way for patients to take enough estrogen to fight off the possibility of Alzheimer’s but not enough to creates cancer cells.

He said he chose to study Alzheimer’s disease because it is a very scary disease and he does not want to see himself or anyone he loves get it.

“Every way you look at it a person with Alzheimer’s loses their dignity,” Nathan said.