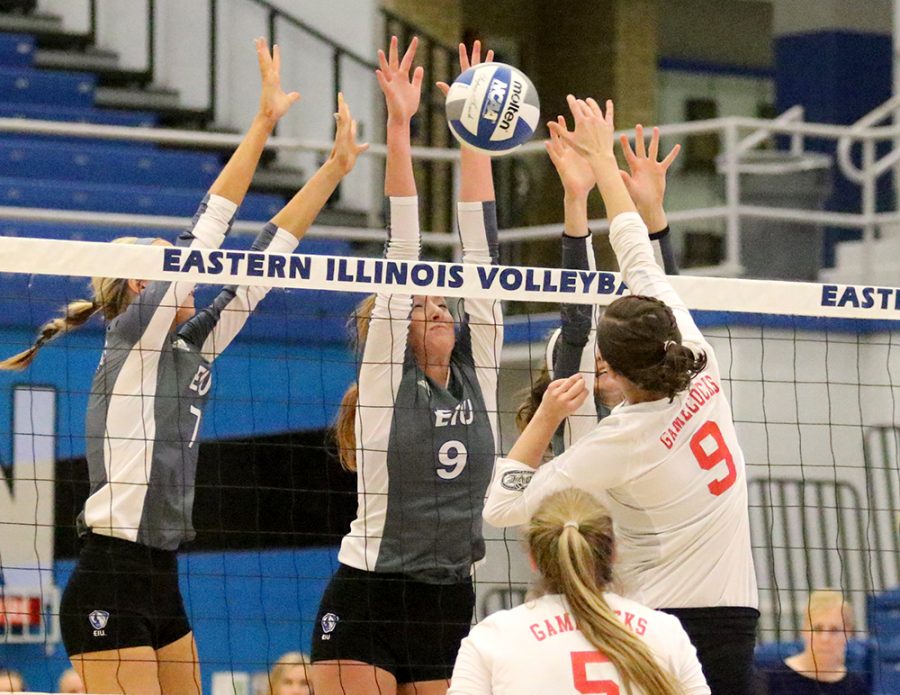 Senior Allie Hueston (9) records the block against Jacksonville State in Eastern’s win Oct. 21 in Lantz Arena. The Panthers play Southern Illinois-Edwardsville Thursday in the first round of the OVC Tournament.

Eastern beat Tennessee-Martin on every statistic except digs and kills. The Panthers notched 59 digs to the Skyhawks’ 65 and had one less kill at 47. Junior setter Taylor Smith and freshman outside hitter Laurel Bailey each earned 12 kills on the day to lead the team. Smith and sophomore setter Gina Furlin led in assists with 20 apiece.

The second set of the match set the tone for the rest of the game after Eastern fell by five in the first. Set two was ignited by a 7-0 run for the Panthers, and Eastern lost the lead just once.

The Panthers were then able to reverse to score of the first set in their final set of the match. Senior middle Allie Hueston and freshman middle Abby Knight solidified the front row, leading in the fourth set with Hueston’s three kills and Knight’s four blocks.

This match marked Smith’s eighth triple-double of the season. Smith added 10 digs to her 12 kills and 20 assists. She currently leads the National College Athletic Association in triple-doubles.

The loss pushed Tennessee-Martin just below an OVC tournament berth as the Skyhawks end their season at 5-11 in conference play. They finished 10th in the conference overall.

Smith once again played a leadership role for the team. She led in kills with 17 and blocks with eight. She earned her ninth triple-double as well, adding 25 assists and 18 digs to her personal stats for the game.

Hueston and senior outside hitter Maria Brown each earned double digit kills at 13 and 11, respectively. Sophomore libero Anne Hughes once again led in the back row with a team-high 22 digs.

The Panthers are back in the OVC tournament after missing it last year.

“I think the difference comes down to confidence and execution this year,” Brown. “Last year, we didn’t have as much confidence in ourselves in believing that we could beat these teams. This year our execution rate is much better in closing games compared to last year.”

Brown said everyone is excited for the tournament and realizes that everyone is equal and anything can happen.

No. 7 Eastern Illinois will take on No. 2 Southern Illinois-Edwardsville in round one of tournament play Thursday at 1:30 p.m. at Austin Peay. Should the Panthers win, they will play in the semifinals on Nov. 17.

Kaitlin Cordes can be reached at581-2812 or [email protected]