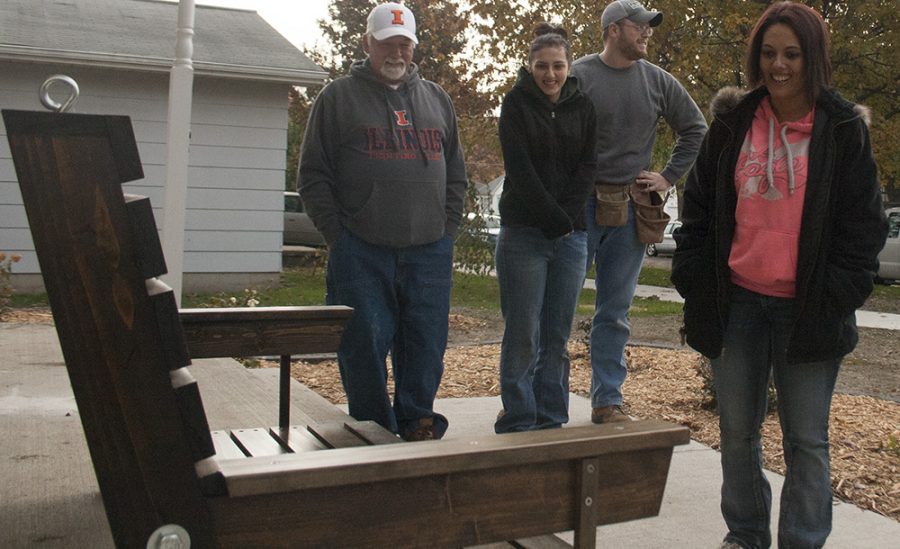 Mattoon resident Aisha Crowe, standing by her daughter and a couple of volunteers from Habitat for Humanity, admires the porch swing made by Eastern’s Construction Club. The porch swing was presented to Crowe on Saturday morning.

One family got a pleasant surprise Saturday morning when they were presented with a new porch swing made by the Construction Club and given to them by Eastern’s chapter of Habitat for Humanity.

Kayla Young, the president of Habitat for Humanity, said the Coles County chapter of Habitat funded the building of a new house for Mattoon resident Aisha Crowe and her family, and Eastern’s chapter partnered with them to help build it.

Back in September, when Young was visiting the site where the house is being built, she overheard the Crowe family saying they really wanted a porch swing.

It was not in the budget, so originally, it did not seem possible to get one. But then, “the wheels started turning,” in Young’s head, she said.

Young had the idea of partnering with the Construction Club to have them build the Crowes a porch swing.

Habitat for Humanity talked back and forth with the construction manager, getting all the measurements of the swing correct.

Young said it was “incredible” to see the shock on the family’s faces when they got the swing.

Helping build the house itself has also been an emotional process for Young.

“I’m so happy to do this work for people,” she said. “I just really enjoy helping out these families, giving them the home that they deserve.”

Crowe wanted the porch swing to be able to give her daughters and her a chance to be outside and meet their neighbors, who she has already spent time with.

“We have amazing neighbors, so it’s pretty exciting,” Crowe said.

Crowe’s daughters have expressed their excitement over the new house.

“They mentioned since they developed that house they never want it sold or anything,” Crowe said. “They feel like they built this house. It’s personal to them.”

She said in other places she has lived, she did not know to do things such as cleaning the furnace or how the wiring or water heater works, so being able to do so now is “really cool.”

“It makes you really independent,” Crowe said. “I’m actually able to maintain my own home.”

Crowe and her daughters have been at the house for every building session.

“It’s really amazing to see from the ground up what it goes through,” she said. “I know this house inside and out.”

The building of the house has been a long process, but Crowe said it has been “worth every bit of it.”

Crowe said she continues to get inspired every Saturday watching volunteers work on the house.

“They don’t just throw it together. If something’s not right they’ll (fix it),” she said. “I’ve never seen anyone care (like that). They built it like it’s their own.”

The “house blessing,” when the family and others will gather at the house to celebrate its completion, is set for next week.

“I’m really happy the family is going to be able to get in the home before Thanksgiving,” Young said. “They’re going to get to have a Thanksgiving dinner and everything.”