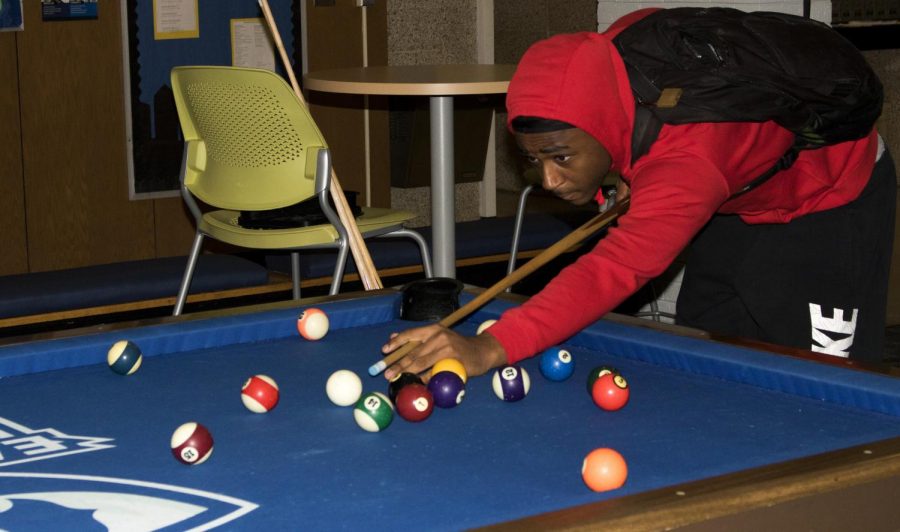 Students got to know members of the University Police Department during Pizza, Pool and Police, hosted by Residence Life and Conference Services Tuesday night.

Kelsey Cripe, assistant director of Residence Life and Conference Services, said the idea of the night was to try and bridge the gap between the students and the police.

“We wanted to bring light to the fact that they are real people and a great resource for residents on campus,” Cripe said.“The police are there for the people and residents, and all they want is to help them at the end of the day.”

“We’re here if you need us, and we’re not here to just take your reports if something happens,” Oakley said. “We’re here to also serve you, be proactive and be involved with your stay here at Eastern.”

Oakley said while the police department is currently shorthanded, he enjoys having opportunities to reach out to students.

Erin Kristovich, a senior organizational and professional development major, said she appreciates the officers coming out to interact with students.

“At my last college, the officers interacted with us a lot, and we could go up and just kind of joke with them,” Kristovich said. “It’s good to start to see that kind of relationship here.”

During the night, officers were laughing and joking with students as they challenged each other in table tennis and got to know each other.

“The more (officers)  get to know the people they protect and serve, the easier it will be for them to do that job,” Kristovich said.

Kristovich spent a majority of her night playing table tennis with the different officers.

“It’s unusual for me to do something like that,” Kristovich said. “None of us were really any good at it, but it was actually super fun.”

Kristovich said she had a great time and could see herself coming to another night like it.

“Everyone was just really friendly, and I had a lot of fun,” Kristovich said.

There were smiling faces all around and many people participated in the different games until the night ended.

Kristovich said the best part of the night was getting to bond with the officers who attended.

“Anyone who can do a job that no one else wants to do, and to be able to do it in a friendly manner, that makes a hero to me,” Kristovich said. “And it makes me feel safe knowing we’ve got a lot of heroes around here looking out for us.”